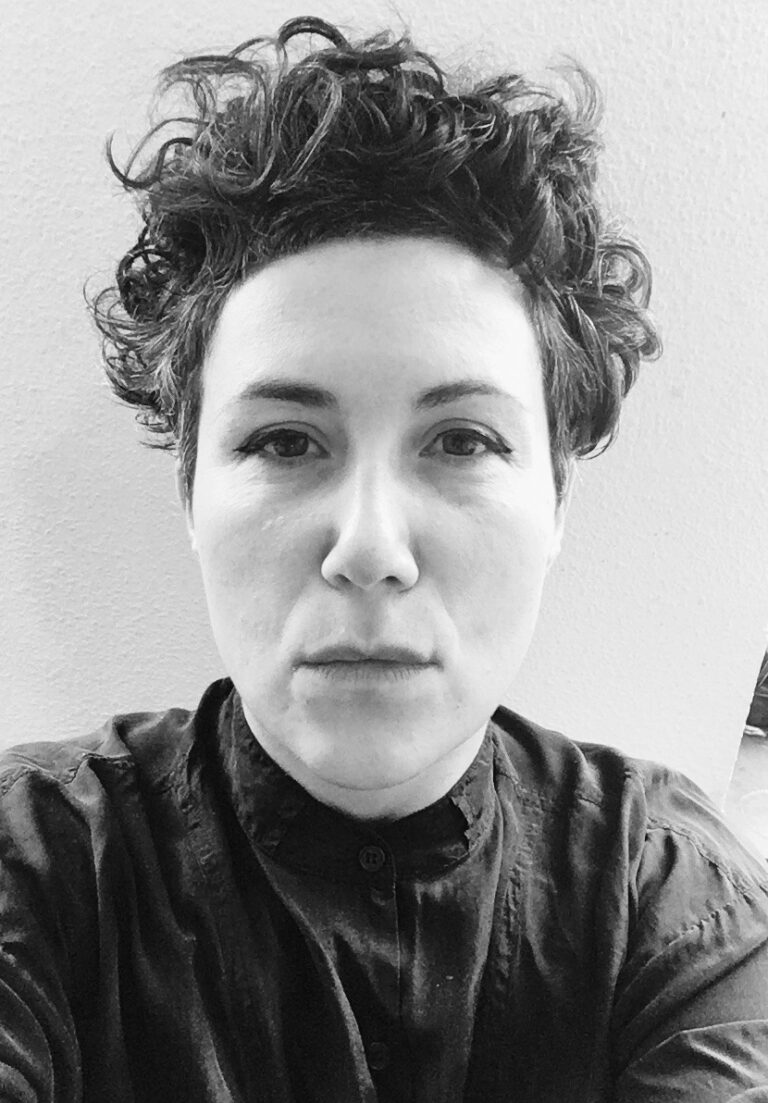 – born in 1979, Katarina Zdjelar grew up in Belgrade and is currently based in Rotterdam. Working mainly in the medium of video, her work explores the way one body encounters another as a site of resistance and possibility, pointing to the fragile agency of collective action in the present. Voice, music, sound and language have been the core interests throughout her practice. Her most recent works look at the potentials and legacies of pacifist (proto) feminist practices, including that of Käthe Kollwitz and Dore Hoyer. Zdjelar holds an MA in Fine Art from the Piet Zwart Institute in Rotterdam, she is a graduate of the University of Arts Belgrade and has completed a two year residency at the Rijksakademie van beeldende kunsten in Amsterdam. Zdjelar represented Serbia at the 53rd Venice Biennale.

Over the past years I have been interested in the investigation of the manifold ways in which to negotiate between the code of language and the physicality of speech, as well as an investigation into the ways in which language draws us together into communities1. Language learning is of particular significance for me as this is a codified method of cultural integration not only involving a symbolic “rite of passage” of the uprooted individual, but also the very material and corporeal effects shaping this “speaking body”. My interest in language emerged from practical applications of a “caring control” imposed by regulated systems of social adoption and inclusion in the developed, liberal societies of the world2. The dialectic of individual and community is of interest in my work. I articulate this in the rift between a universally valid, abstract language and a concrete, always physical voice.

Concerned with ideas of foreigners, estrangement and normalization, I explore processes of self-realization with all their paradoxes, promises and failures. I am particularly engaged with the inhabitation of regulated systems (knowledge, language, ideology) by non-authoritarian voices (amateurs, foreigners, children), who challenge the system in which they appear, in terms of ethics, value, and currency3. Working with a variety of subjects, from a phonetic transmutation by non-English speakers of the ‘Tears for Fears’ song, utterances in the Russian language by the citizens of Tirana, to ‘foreign accent removal’ treatment, my work over the past years has been looking at the relation between an individual and a collective (how an act of speaking marks an individual, what are the limits of expression). From the impact of assimilative language policies imposed on particular groups of people (observed in an asylum camp in Slovenia; integration school for foreigners in the Netherlands; a primary school in Turkey), to abstract manifestations of speech, including the musicality of speech and the physicality of the voice, and instances in which even the most intimate tilting, tinging, and tuning of one’s voice opens up the social relation between receiving a voice and having a voice, are all concerns in my work. It is a voice that lingers, which is in the process of arriving, on the threshold, that I am eager to observe and follow4.

I am articulating these ideas through the moving image and sound, two elements which I equally use in my video pieces. I broaden my interest in these ideas through various discursive projects which allow me to share and gain new knowledge, in a dynamic interaction with other practitioners from different fields.  I create different platforms for knowledge building, speculation and exchange (including curating, writing, organizing symposiums and discussions, making book projects etc.).

It is often interruptions that speak in my work, as I am exploring narratives that cannot be told in/as a continuum. For instance, one of my most recent works, AAA (Mein Herz) is a single-shot work showing a young woman simultaneously performing four compositions5. While preserving the original style, tempo, and rhythm of the individual works, she maintains the key of the different music pieces. Silence, music, sound and words alternate and collide. The female protagonist’s face and vocal chords serve as a battleground for the jerky transition between the different tracks. As if the sounds have been continuously torn from their sockets putting an emphasis on the multiple, fragmented yet simultaneous temporalities which run the economy of her voice and the composition. It is the interruptions that speak, the corporeality of the voice. Her singing is as much about managing the gaps between the tracks as it is about the accuracy of performance of each of these historically, stylistically and linguistically distinct compositions.

One of my latest works “Not a Pillar not a Pile (Dance for Dore Hoyer)” is inspired by archival documents from an all women’s dance studio founded in 1945 in post-war Dresden by Dore Hoyer, a choreographer and expressionist dancer, whose choreographies took the graphic works of artist Käthe Kollwitz as their departure point. My latest film installation departs from this artistic meeting between Kollwitz and Hoyer as a manifestation of shared affinities with (proto) feminist pacifism, solidarity and collective transformation across the barriers of time, class and social difference. Drawing the past into the present, I have gathered an international group of dancers and activists to create this filmic work. Their costumes and the film set bear a pattern created by women workers of the Pausa textile factory in Germany, whose anti-fascist resistance resonates with that of Hoyer and of Kollwitz, and the latter’s graphic works are in turn echoed in the wood cut floor panels. In the resulting film installation one body encounters another as a site of resistance and possibility, pointing to the fragile agency of female collective action in the present678.

I mainly employ the rehearsal as a working method to explore the voice as a subject and substance. For the video “Reading ‘Europe, Where Have You Misplaced Love?’” I brought together four musicians for an improvisational interpretation of a poem written by Athena Farrokhzad, Europe, Where Have You Misplaced Love?. The aim of the improvisation is not so much to arrive at a final performance, but rather to keep the range of possibilities open. One by one the musicians take control and then let it go again just before arriving at a common melody, at which point doubts or another voice steer the process in a different direction. It becomes a continuous search in which a multiplicity of interrelating voices coexists. This approach adds a layered interpretation to Farrokhzad’s reflections: https://lithub.com/athena-farrokhzad-europe-where- have-you-misplaced-love/ (accessed 01.02.2019)91011.

Text is written in collaboration with Jelena Vesić (2022)