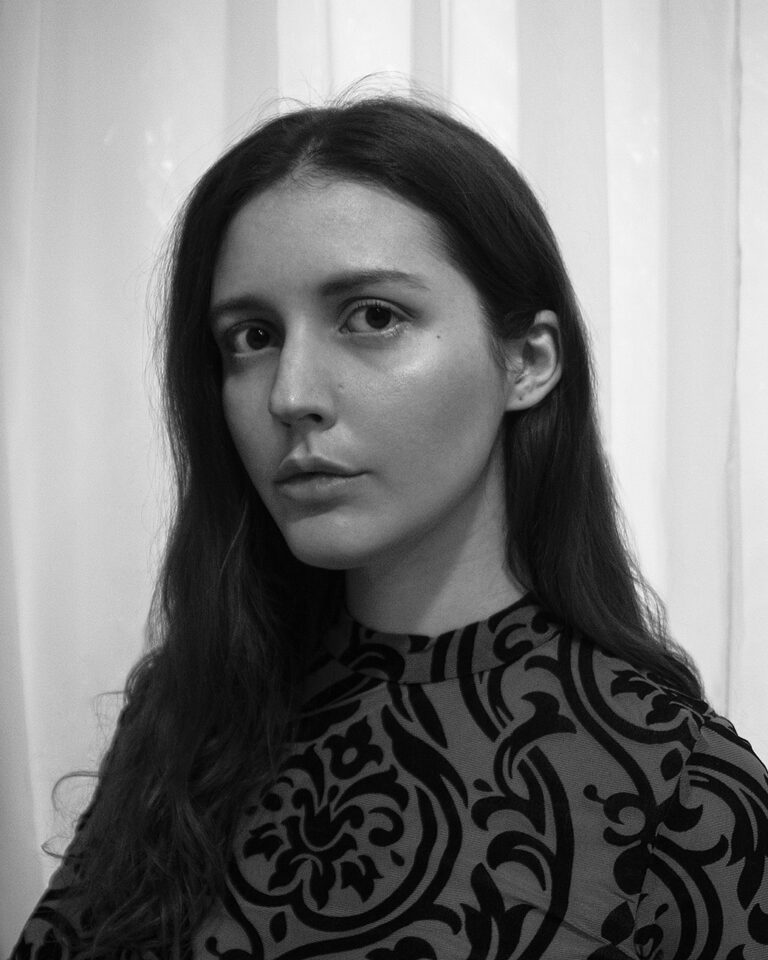 – born in 1992. She is a visual artist based in Budapest, Hungary. After graduating from Fine Art Photography course at Camberwell College of Arts, University of the Arts London, she completed the MA Photography course of Moholy-Nagy University of Art and Design, Budapest in addition to studying Spatial Design at the Universitat der Kunste Berlin. Her exploration of the frontiers of photography as medium roots in her study of its potential for abstraction and the possible intersections between photography, installation and sculpture. Her works focuses on the sensual and ontological nature of the photographic image. She often bases this on cameraless procedures, such as the photogram or luminogram techniques, which she later blends with UV printing on thermoformed plexiglas. In recent years, Szilvia Bolla’s work has been presented at The Wrong Biennale; Trafó Gallery, Budapest; Art Quarter Budapest; Unseen Photography Festival, Amsterdam; and Vorspiel/transmediale, Berlin.

I was born and raised in the ’90s on a river island in the Danube south from Budapest. A unique wetland polluted by an illegal oil spill leaving its ecosystem irreversible and forever devastated by the end of 2020. Native to the digital era12, I grew up playing with Photoshop, digital scanners and printers while in the dawn of online microblogging the acceleration and mutation of images were getting deeply embedded in my thinking3. I remember creating artworks for Tumblr way before entering a physical contemporary gallery space. Although I consider my earliest conscious art piece a mixed media collage for a Baltimore based screamo band who I met via proto-Vampirefreaks.com, a thriving social networking site in the early 2000s dedicated to gothic subculture. Navigating endless cybernated landscapes, I used the Internet to play and explore my identity as an artist.

After getting rejected by Hungarian art schools, I left for Scotland at the age of 19 to delve into the feral scenery of the Outer Hebrides through photography. I was helplessly enchanted by the paintings of northern romanticism, the pre-Raphaelites and symbolism while learning about the possibilities of lens-based media. Later, I graduated from the fine art photography course at Camberwell College of Arts in London which radically shaped me and my practice. Fearless risk-taking and endless trust in embracing trial and error. Process-focused experiments within the post-medium condition and beyond. Pushing the boundaries of photography and doing whatever feels right.

Those who can read my work well tend to say that it has an unusual dual nature456. It’s elegant and brutal, fragile and spiky, tranquil and anxious at the same time. It resonates the same tension that is also its source of creation. I’ve come a long way before arriving at the sculptural terrain. I would call my practice crypto-photographic as the logic behind it originates to light-sensitive silver halide crystals reacting to photo-chemicals as obscure experiments in the darkroom. Photography without the burdens of representation felt so relieving as I immersed in camera-less techniques. It was a response not only to the collapse of the medium, but a world accelerating towards total uncertainty, immateriality, and the absence of presence7. Contrary to escapism or seemingly selfish formalism, photography beyond representation remained enduringly relevant by challenging technical images and vindicating reality. In that sense, the core of my research became the ontology of the photographic image8. By treating it as a tactile object, my process involved fluctuating between the analogue and the post-digital through dynamic printing and installation strategies91011.

Boundaries between image and sculpture were becoming more and more mysterious as I found myself creating material and medium hybrids. UV printing luminograms on a transparent perspex surface held an inherently captivating, even pleasing aesthetic due to its reflective, eloquent nature which I’m still recklessly challenging. It took shape in careful, frail, even overly clean sculptures with strong references to theory, however, they concealed the more intimate psychic, spiritual and material meshwork that was fueling my practice. They remained silent about the weight and pressure of their birth. I fluctuated between joy and fear when an artwork took over me when the process was more powerful than the outcome. Often, it remained my own heavy experience rather than something that anyone could easily grasp when looking at my work. I found myself on a quest to tackle such obstacles as my focus shifted towards sculptural gestures and material research. Corporeality became my true object of desire1213.

Instead of necessarily addressing content and meaning attributed to materials, I was yearning to understand their power to mutate and their plasticity. Also, within the surface lies the quality of becoming, a metamorphosis that starts from emotions and engages with the material. Inspired by the notion of thing-power; a vibrant force running across bodies whether human or non-human as introduced by posthumanist and new materialist theories14, I was interested in how my subconscious and traumas manifest on the surface of different media. The surface of matter inclined towards a healing playground for mental processes and self-analysis, a medium of communication per se15. I considered this turn as organic progress from photography to the tridimensional and the tactile, however, it was rather personal. I found relief in connecting my practice more closely with my body by drawing analogies between image surfaces and the skin16. As a shielding, yet vulnerable layer in its colour, texture, accumulated marks and blemishes, the membrane as a vital organ both records and represents on psychosomatic levels17. Paradoxically, it wounds and creates worlds18. So it has transformed into a ceaseless deconstruction and awakening of the self as an artist and a human being.1920

The final version of the statement was edited in collaboration with art historian Róna Kopeczky (2021).

Róna Kopeczky – born in 1983, a curator and art historian based in Budapest. She worked as a curator for international art in Ludwig Museum Budapest between 2006 and 2015, where she mostly focussed on the site- and situation specific practices of young and mid-career artists from the Central Eastern European region. In 2015, she joined acb Gallery in Budapest as artistic director, and also actively contributes to the publishing activity of acb Research Lab, with a focus on forgotten, neglected or ignored oeuvres of the Hungarian neo-avant-garde art. She participated in the organization of the first OFF-Biennále Budapest that took place in 2015 and was member of the curatorial team for its second edition held in Fall 2017. She is the co-founder of Easttopics, a platform and hub dedicated to contemporary art of Central Eastern Europe that is based in Budapest. She is also the curator of the next edition of the Tallinn Print Triennial, scheduled to open in early 2022 in Tallinn, Estonia. She completed her PhD in Art History in 2013 at Sorbonne University.