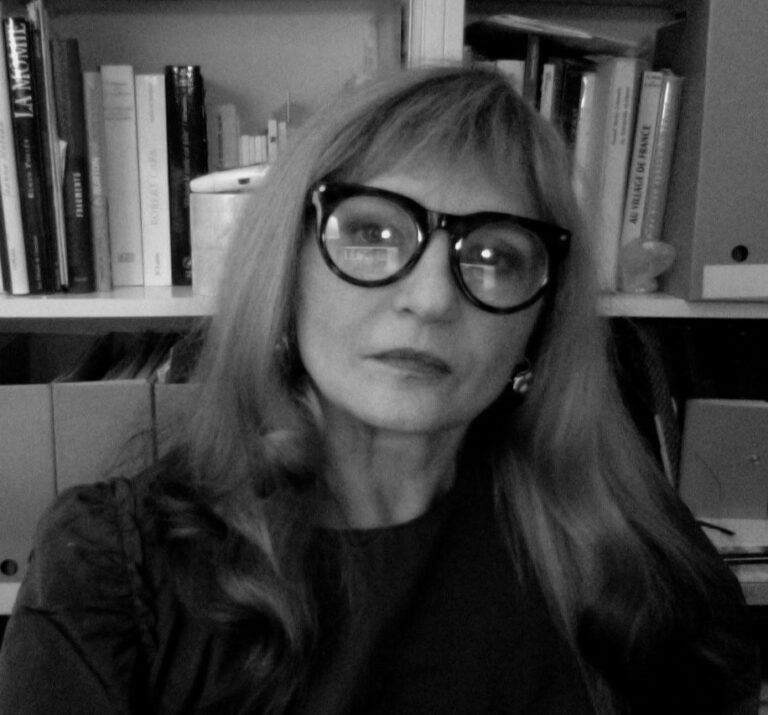 – born in 1944. A Hungarian artist, set and costume designer, film director. She moved to Paris in 1981 where she currently lives and works. Before her moving she worked at the Textile Workshop in Velem, Hungary, where she started to focus on the relationship of body and textile. From 1981 she has been exhibiting in museums until 1985 when she bid farewell to fine art at the last Paris Biennial. Since then she has been working with the medium of film. In her works she often includes her own body and merges the elements of music, fine art, film and performance. Her films won international film festival awards. Her artworks were exhibited at the Ludwig Museum in Budapest, the Musée d’Art Moderne in Paris, the HMKV in Dortmund, the Neue Gesellschaft für Bildende Kunst (ngbk) and at the Pallazzo delle Esposizioni in Rome.

I was born under the influence of the planet Uranus and I came back from death many times in my life. Thus the unexpected events also brought good things. My first experience inside, outside breast milk, is the tremendous amount of snow: clean sheet, white canvas. Then the first summer: I woke up in a rose garden, the world was full of color and smell. My mother’s name is Rose.

We lived in Budapest near Lake Feneketlen (Bottomless Lake), our Christmas tree reached the ceiling and one day we found ourselves on the streets with our suitcases. I recovered from this trauma with the support of music and singing. I could only speak by singing, because opera meant an intensified state of mind to me in which it was possible to live and avoid reality.

Finally we put down our suitcases in Angyalföld (Angel’s Land), in the outskirts of Budapest, where the five of us lived in a one bedroom apartment. For Christmas, when other children asked for dolls and strollers, I asked for a box of pencils, stating that the brand has to be the Czech Kohinoor. I drew my dreams and the faces of the tenants on the walls of our house that had a spiral staircase in it. I was the protagonist, this was my first exhibition. Maybe Banksy saw me flying to the sky with a balloon, wearing a crown?

Elementary school was a nightmare, there was nothing between the lowest and highest grades. At the end of the year, eminent students were called by their names for rewards. When I heard my name I hid so I will not be shamed for being the worst student. Thus my drawing teacher shouted my name and showed a certificate from Japan, where she sent my drawings without me noticing and I won the first prize.

My drawing teacher suggested that I apply to a high school with a focus on art, but instead of this I enrolled in a school of economy and industry, because I thought it was more serious.

I left Angyalföld (Angel’s Land) before my final exam by marrying a man living on the luxurious Andrássy Avenue. That was the time when I started to travel the world ecstatically from the then isolated Hungary.

Perhaps this is also the influence of Uranus? I divorced and my next marriage led me to the world of theatre and film, I started to design sets and costumes. I was asked if I had a diploma, because talent and the fact that I can draw and I have fantasy is not enough. Although I lived two steps away from the University of Fine Arts, I was not attracted by the world of panel paintings and by the perspective of being stuck between frames. As a woman, I was predestined to apply for the textile design course of the University of Applied Arts, as women were applying there at that time. Once in a while I participated in courses of the University of Music and the University of Theatre and Film and designed sets and costumes for the pieces created by the students.

In the late 1970s, after graduation, my film Time-Wallpaper1 was screened at the Club of Young Artists’. In the film I am performing the butterfly swimming technique, wearing headphones and a microphone. During the full house screening, Miklós Erdély – influential artist and leading figure of the Hungarian underground art scene – immersed my head in water according to the rhythm of the film in order to baptize me and inaugurate me as an artist.

After this I said goodbye to the never practiced profession of mine, to my textile artist diploma. In the performance called Textile without Textile2 I laid naked on a loom made by my father Joseph an engineer, being the thread loop in the machine. This is the strongest bond I made with myself and art for a lifetime.

I continued this idea of “with myself, about me, about art” in the Museum of Fine Arts. In one of the most famous masterpieces of the museum, I sat in the place of an artwork surrounded by a cordon, I was on loan, guarded by an armed policeman. Behind me – the Annunciation by El Greco was also on loan.  This painting symbolizes the fatal sign determination in my life, the desire to create that I have to announce myself then and there. I am a Work of Art (1979)3. A lot of images were taken, but one of them became an icon, as it was in relation with the Zeitgeist of that time, and because I was guarded by a policeman in the museum. Fortunately, the ruling communist power ignored the artistic value and the idea behind the whole action.

In 1980 I posted an advertisement in the French newspaper called Libération. People could bid for me and the collector who offered the highest amount could purchase me as an artwork. In the presence of civil policemen, I married the French collector in Budapest and moved to Paris. Life became my stage where I have to play my destiny.

This is where the real existence of the human-artwork starts, because its value is decreasing by age. My film Transcription de Lucas Cranach/I am Work of Art45 describes this issue with the music of Kaija Saariaho (the artwork was presented at HMKV in Dortmund in 2010).

The indestructible unity of fine art and music was present in almost every work of mine. I participated in the exhibition of Musée d’Art Moderne in 1983 as a musician (Klangplastik concert) and in 1984 I exhibited a sound sculpture (Modelectricité) here. In 1985, I created my piece Csókolom for the music section of Nouvelle Biennale de Paris together with the composer Kaija Saariaho. With this work I left the world of exhibition spaces for a while.

I didn’t even want to hear about galleries, because I was not interested in commercial activity. I wanted to reach a broader audience who can access my works in museums. Following this idea, I ended up working for the television, first as a screenwriter and then as a director.

After this change of media I was still loyal to music. My trilogy of portrait films date about composers György Ligeti (screenwriter), György Kurtág (director), Péter Eötvös (director) were screened all over the world and I received prestigious music and art prizes.

After all that, I returned to fine art with my film about Jeff Koons. In 2018 in Berlin (nGBK Neue Gesellschaft für Bildende Kunst) I married myself (sologamie) in a white wedding gown in my performance titled Konkraktus.67 I swore to myself that from that point on, I will be myself and will do what I was born to do.

My work called I am a Work of Art reminds me of artist Hilma af Klint, who asked her successor to show her work to the world only twenty years after her death, because maybe then it will be understood.

“Art is what makes life more interesting than art.” Robert Filliou of the Fluxus group.

The artist statement was written in collaboration with curator Andrea Soós (2021).