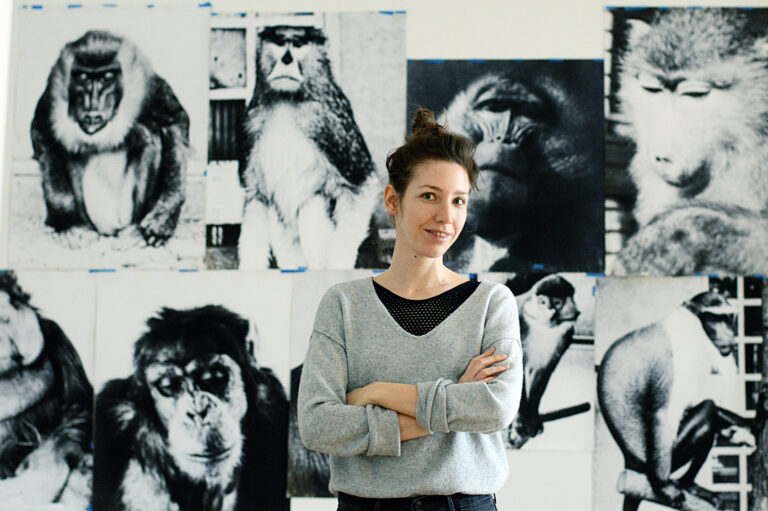 – b.1984 – is a visual artist based in Novi Sad, Serbia. She works across artistic, curatorial and pedagogical boundaries focusing on issues of cultural geography, the responsibilities of history and its impact on the present, through photography, video and illustrated lectures. Since 2014, she has teamed up with the picture researcher Daniel Popović (b.1978) to investigate picture archives and their potential to unveil a nuanced understanding of the world. She is a board member of the SULUV gallery, and associate professor at the Academy of Art in Novi Sad where she teaches Elements of Visual Art, blending her collaborative artistic research projects with educational strategies.

I grew up in Serbia, during the war and in the immediate post-conflict period, as a child of a mixed marriage, constantly shifting between speaking Hungarian to my mother and Croatian to my father. Belonging to a Hungarian and Croatian minority and living and growing up in Serbia was quite a challenge. But it was not only about the language, it was the experience of living with multiple cultures, cultures which at one point in different histories had been very hostile to one another. I often joke with the idea that I am inevitably all of the three nationalities at the same time: an enemy, a criminal and the ally, an avenger and the victim, a spy, a traitor and the betrayed, an occupier and the occupied. These experiences taught me to acknowledge others and empowered me to come up with different styles of thinking and different ways of talking. This in turn greatly informed my artistic practice as I was able to take on different identities, and open up my work to alternative narratives, conflicting stories, troubled histories in a more buoyant way. I work collaboratively and interdependently, with my partner, my parents, my students, my fellow artists, curators, journalists, scientists or historians, often working with the picture collections of different public companies and private individuals as a means to discover stories outside the official histories. I see these stories as incidental school lessons through which I learn and unlearn and ask lots of questions. So, let me guide you through some of these stories.

This is me and my brother Ivan1, photographed by my mother Cuni in the ‘90s on the balcony of our apartment. Equipped with an old Zenit camera and a teleobjective lens, Cuni was an inspiring photographer and a fantastic instructor! She taught us how to pose and when to smile. She took hundreds of photographs during the Yugoslav wars, sending them to our relatives in Szeged and Vinkovci.

When we finally moved out of our parents’ home, the only person there was left to be photographed was my father Ivica but he was not very enthusiastic about being photographed. My mother was very disappointed by this, stating that she was giving up photography forever because my father is always in the same place with the same face2.

Animals in the Zoo are also stuck in one place. These photographs3 are a tiny part of the Historical Research & Documentation centre of the Schönbrunn Zoo. They belong to the ‘Primates’ box, collected by the renowned Zoo director Otto Antonius. And this is Emil4, an Orangutan media star and a favourite attraction – until he became extremely fat and so depressed that he refused all forms of contact. After his death, Emil’s body parts were distributed around various scientific institutions and museum collections, so I went in search of them.

Otto Antonius, the Zoo director, was also a horse enthusiast, or to be more precise an equine scientist, collecting thousands of different horse pictures and illustrations5. He was interested in cross breeding studies and attempts at breeding back – specifically in bringing back the extinct wild European tarpan horse. When the Allied troops were closing in on Vienna to liberate the city, Otto Antonius took his own life and that of his wife inside the Zoo.

My mother is also a passionate picture collector. She collects supermarket catalogues and makes shopping lists in the form of these beautiful collages6 in order not to forget what to buy.

My mother inherited this passion for collecting from her grandfather Agoston. He was a travelling salesman for the Čakovec factory, selling silk thread and underwear. This set of scans7 are from his collection of the Képes Vasárnap (Picture Sunday 1937-1944) collected between 1941 and 1944. Képes Vasárnap was an illustrated weekly supplement of the Pesti Hírlap (Daily Pest, 1841-1944) from Budapest, today known for its journalists who worked undercover for a pirate radio. Everything they were not allowed to write about in the newspaper due to censorship they dealt with in the Hungarian Freedom Radio.

Living undercover and hiding one’s true identity sometimes were a means of survival. These photographs8 were taken during the Holocaust by Jewish families who went into hiding as tourists abroad. Often using false documents, these families were buying themselves an apparent route to safety. Most of the time, properly forged documents were not enough to ensure survival undercover. It was also equally important to have the ‘proper’ appearance, a new personality and to be able to act in a ‘normal’ way. The photographs were often made as snapshots of happy moments, but only when we find out about the context of the image does the contrast between the actual truth and the played out truth increase. Through these acts they were misleading the viewer, they became invisible, but not in the way that they could not be seen but in a way that they would not be interpreted as Jews.

Currently I am developing a research investigation into the Pine processionary caterpillars at the Marjan Forest Park in Split. Described as a great villain and the most destructive species of pines and cedars, and also harmful to humans and pets causing allergies and irritations to the skin, hikers at the Park seem to have taken on the moral obligation and right to exterminate them. As though there is a competition as to who is able to tread on and crush a longer line of the processionary caterpillars, their crushed bodies9 form a visual pattern on the hiking path, inviting others to join in the stomping. Following blindly the violent example of another – do we justify this killing by the economic catastrophe the caterpillars produce, and the skin rashes they give us if we try to sniff them? Who gets to decide what lives or what dies?

So I got to a point where I had to ask myself and to think about what the pine processionary caterpillars have in common with the family photographs of Jews in hiding or my great-grandfather’s collection of propaganda photos? Or how do my mother’s shopping lists correspond to the horses of Otto Antonius? And what could the Apes of the Schönbrunn Zoo tell us about my father, my brother and myself? What does it mean for all these things to (co)exist in my biography, on a single piece of sheet/screen, as an index print10? Indeed, what has been left out from an image speaks much more than what the photos really show.

Text is written in collaboration with Jelena Vesić (2022).