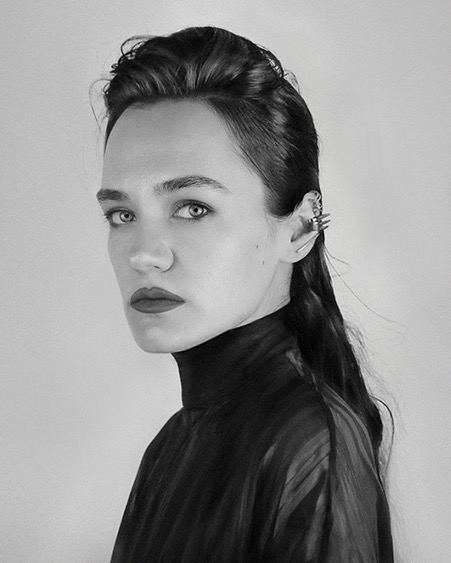 – in 2003-2008 the artist was studying at the Belarusian State Academy of Arts, the Department of Easel Graphics. Since 2010, she has been involved in professional activities, also taking part in numerous exhibitions. All the artist’s works, through the strategy of constructing ambivalent images, are aimed at rethinking/deconstructing extensive concepts, such as the system of art and society, religion and culture, history and memory, gender policy, the analysis of the role of contemporary museum, the subject of identity crisis, etc. At the same time, Zhanna Gladko deliberately profanes and at the same time actualizes/enhances the above-mentioned issues by exploring them through her private experience.

Artistic practice is not something stable and permanent but a constantly flickering area with its mechanisms sensitive to both internal processes and external effects while remaining autonomous.

Ambivalence has become one of the central motifs, an important layer that underlies all my works. I see no theme as something unambiguous, immutable, fundamental, having only one focus. Before 2021, my projects had been approached through the prism of duality and ambiguous perception regardless of the subject raised. Moreover, it is the refraction and the area where one thing substitutes or flows into the other, that threshold where one system gets distorted and enters into a conflict with another one eventually replacing it, the blurring of the antagonistic boundary1 that are of interest to me. In my view, the boundary does not actually divide, but rather marks the area, the territory where communication, interaction and connection between the parties occur. Thus, the issue of conflict and the dialogue of divergent or antagonist systems present one more direction I keep exploring.

In my statements, I often underline the non-linearity of time. My recent works do not follow something I have created before. On the contrary, every new implemented idea influences what I was starting with, my current ideas shape my past statements.

I examined the conflict and layering of different systems in one of my first works – Dust2 – which also refers to the subjects of time, memory, and oblivion. It is an experimental piece where for the first time I used dust (museum, construction, and household) as an expressive material I am also workIng with at the moment. The “form” in the Dust installation strives to embed in the construction of an alien system, of another world which reminds me of my own experience. It is conveyed through the language of sculpture and addresses the problems of museumization – when a work of art is utilized and levelled when entering a museum space where it is subjected to strict laws and rules of the established system.

Expanding the idea of the transformation of a topical living art statement into a dusty work of art subjected to regulation and correction and displayed in a public area or a gallery’s white cube as an “object”, in 2021, I created a site-specific installation Inciting Force, which refers to a quasi-museum collection based on a family archive3 that later grew into a large-scale series of works. One of its layers presents an autobiographical story of complicated relationships between the daughter and father. Autobiography has become an important angle of my practice with a personal story seen as a rather universal module able to demonstrate the principle of social relations on a global level – something that can be correlated with any system: art, religion, or politics. The sphere of private life manifests itself in certain political, economic, social, and ideological contexts. Through the author’s strategy of “creation through negation” and “aesthetics of destruction”4, it was important for me to create a tense drama where father-daughter relationships can be characterised differently: from traumatic experiences of repression and psychological violence to emancipatory practices and inner strength cultivation5, with both the characters being active narrators, which negates conventional division into victim and tyrant.

Collective history always makes its way to a person’s life as a part of one’s personal history. In my opinion, now we are living in times when it is a personal action that can actually make a difference. Due to my childhood peculiarities related to body awareness issues (my parents wanted a son and raised me as a boy), in my practice a lot of attention has been paid to the subjects of body and gender. The Inciting Force project is an attempt to find self-identity in dialogue with the Other. An important part of the cycle was a series of self-portraits6, in which the theme of reflection, mirrors, duplication and doppelgangers was important to me. As a child, I was more a doppelganger of my father than someone of the other gender7. However, being the Other’s doppelganger does not mean sharing their sex, gender, and identity. I don’t see identity as something stable and sustainable. It is the aspect of “subjectivity blurring” that I see as relevant – identity as akin to something fragmented, unstable, changeable, and elusive.

Many images in my series reflect personality dark sides – features often ignored and displaced into the unconscious, turned into perverse, rigid zones, which also points at painful symptoms at the social level, formed cultural icons and clichés8. Most often I reproduce a series of self-portraits on metal reflective surfaces that cast reflections and shadows, thus emphasising the topics of fragmentation and distortion, the layering of personality9. With the help of mirror planes, I also try to capture the viewer’s gaze and reflection and place them in the field of my narrative. Among frequent methodological tools I use in my works there are appropriation and capture, trying on the characteristics of the Other – the one who takes the position of opposition or authority10. Many of my works are direct quotations of well-known art, cinema and popular culture artefacts11. What matters to me is not simply duplicating someone else’s statement I engage in dialogue with, but re-coding or breaking the initial code and shifting meanings. Obviously, one of the perspectives the Inciting Force series also dealt with was a topic of exclusion – not only from the family but also from the professional art system – the reflection on my role as an artist in the field of Belarusian contemporary art12 13.

Since 2016, I have been working on a series of works related to Lilith mythology. I am interested in the archetypal phenomenon of the hidden, rejected, repressed – similar to what Carl Jung considered as the shadow archetype in his analytical psychology. My attention is drawn to the process of separating the shadow from the personality we become as a result of acculturation, as well as integration, “merging with the shadow”14. In 2020-2021, I had a personally important experience of implementing my ideas in interdisciplinary projects by collaborating with European composers who use sound as their primary medium, which at the moment adjusts my personal artistic trajectory as well as the focus on creating new forms for expression15.

The category of Power is another significant area I consider in my practice. At the same time, it appears to be as unstable and disbalanced as the category of the ambivalent, shifting towards relativism. I emphasise the issue of fragmentation, the conflict of different discourses and the paradoxical nature of the progressive view or opinion due to intellectual semantic layering16 17. T2020 has become an important period, a threshold both for Belarus and the entire world. It is a turning point, when the old unipolar world ceases to exist forever. We are living in challenging historical times with the Overton Window constantly shifting in society. And it is the issues of distortion, deformation, changes in space and in the information field, fracture and fragmentation, constant rewriting of memory and past events, in the course of which history turns into the phantom that one of my latest works and the slogan FORCE FARCE FALSE18 are dedicated to.

FORCE FARCE FALSE is a symbolic reference to the post-truth era when information flow is characterised by meanings layering, displacement and devaluation. This slogan made of dust refers back to the times of manifestos, doubts, instability, strength and vulnerability, fears and hopes, the times of anger and enthusiasm that were in the air in 2020 during the turning events in Belarus19.

Recently, I have started using light as an independent visual tool, increasingly often approaching the light beam as a subject and reflective surfaces and shadows – as a field of encoded meanings. In my works, I am opting for video projection avoiding the use of monitors. The idea of “projection” as such is important to me. The projector beam acts as an observer whose gaze constructs the reality. I am attracted to the field theory and the idea that everything affects everything – by denying something we uncover its presence20. What artists articulate, what the focus is directed at reflects our personal projection, and the fragment of reality the beam of gaze highlights, the analysis and interpretation of this illuminated area only reveal the subjective experience or the shadow side of an individual interested in getting a certain experience or an answer to their question. This makes each female author’s practice unique and turns their field of research or the proposed strategy of looking into a separate construct, a reality with its own laws and meanings – which is, in fact, what the value of art is.