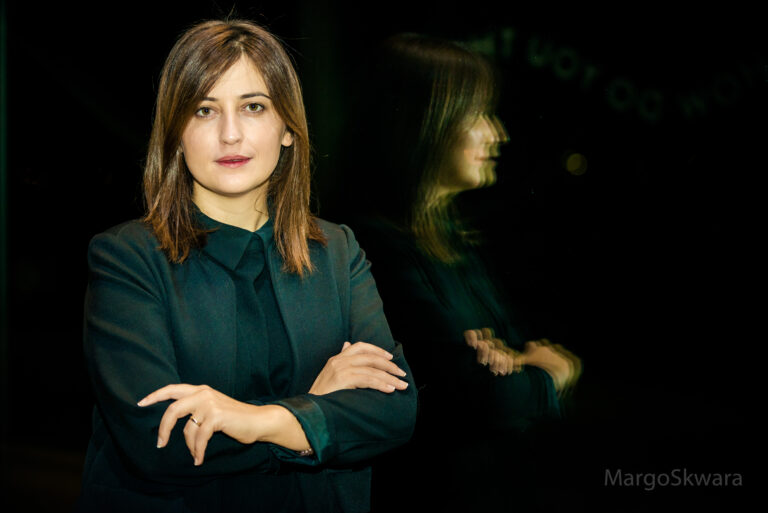 – born in Dibër in 1985. She mainly works with the medium of video art and installation. She studied at the “Jordan Misja” Art High School in Tirana and graduated from the Academy of Fine Arts in Tirana in 2006, the city where she currently lives and works. Her professional experience, in addition to her artistic creativity, touches also upon other fields such as film documentary, teaching and curating.

My family did, as many other families at that time, transfer to Tirana during the initial years of democracy. My journey starts here at the age of 7, during elementary school Labinoti and later on at the Artistic Lyceum Jordan Misja. During the period 2002 – 2006 I undertook my higher studies at the University of Arts in Tirana. My initial employment experience was with private TV stations, which at that time were going through a booming period of development. My relationship with television would persist until the present time, thus I underwent professional growth even in this field.

Television has also been one of the most meaningful supports in my artistic development pertaining to the video-art genre which I had very often picked up for expressing my ideas through my creative artistic activity. For 8 years in succession, I worked as the editor of many advertising videos and artistic documentaries. In 2016, I was appointed as editor-in-chief of RTSH2, a channel fully dedicated to marginalised groups in society including: LGBT community, persons with special needs, persons of old age etc. This new experience developed in me a parallel perspective towards my artistic practice so far. Many of my works were influenced very often subconsciously through the emotions and approaches pertaining to such social groups. Examples can be taken from the Time Anatomy (2020)1, MUTE (2013)2, The Family (2014)345 etc.

My professional experience touches upon, in addition to the artistic creative activity, other genres, such as documentary film, whereby I share a long journey consisting of 6 years. I will also mention the documentary dedicated to Gjon Mili, a photographer of worldwide reputation6, as well as short documentary films, featuring social topics and characters,of relevance to discuss in our society. One of the documentaries Tunels Angel depicts Angel, a 70-year old, who is guarding, same as during the communist regime, the tunnel, built with the perceived danger of enemy attack that could threaten the country, in mind. Ranging between craziness and passion, he has established a museum, where we can see Albania in its 30 years of transition, consisting of many items occupying his underground house, comprising 40 individual rooms. Rami is another character, fine-tuning the pianos and always behind the curtains of symphonic concerts. Rami provides us with another rhythm of musical notes, those which pave the way for the emergence of symphonic music.

My involvement has for 6 years extended over to teaching. I work as  a part-time teacher at the Faculty of Architecture and Urbanism at the University of Tirana, as well as at the University of Arts, in Stage direction and Editing. To me, teaching has been a very good experience, especially the contact time with  students and the reciprocal artistic exchange. Owing to them, many of my works have emerged.

My work as a video-artist has been permeated by an approach which connects them to the element of time and how the reality they depicted underwent changes in the absence of an element or of the implementation of another element. In the video Time Anatomy (2020)8. Anatomy is where we preserve an uncertain time, it appears to us interchangeably as real and surreal. An intertwined anatomy, which does not manage to obtain its appropriate form. As an existing, but also a fake world. We all encounter situations wherein we cannot discern or perceive clearly how the different realities are served to us. They are very often feigned, brutal or face realities, embodying curated and suspicious aesthetics. They are similar to two wishes opposing each-other.

Inspiration for each of my works originates from moments that I find during business trips. I have always found my inspiration against the impossibility to transform the surrounding events, inadmissible situations, which can be witnessed and accepted by all9. This world of ours is made of walls and, perhaps, due to this it is a world. Touching upon the wall of impossibilities has been my permanent passion and fear, where  one undoubtedly has to go to the end. As long as you cannot articulate the things which are witnessed in the darkness of solitude, inhabited by no one, this will be the end. To me, the creation of a work has been an attempt to convince oneself that ‘I am here too’; it has been a means to accommodate some sense perceptions, which can never be articulated. We are in permanent search of the witnesses, be they often invisible, confirming our presence at the most essential level. We have no visible evidence, affirming the appearance of presence. None. I have actually a lot of proof and indications, however, they are all intrinsic, non-sensual, beyond-sensual, or a perfect consonance, emerging out of the unification of the entire senses. To me, the world is an illusion, therefore, it appears to be decent and rational to feed myself with its products, which are also illusions.

I am married and I have a daughter. She has been the subject matter of some of my video and installation related works. I held a conversation, in one of the videos, with my unborn daughter, whereby, the items that I was using during my pregnancy were displayed in the installation. Even during the periods when I did not have much free time and it was difficult to manage, I tried to make my obligations as a mother part of the creation process. I think that nothing can keep you from creating, on the contrary, ‘hindrances’ very often are transformed into real expressive sources.

Regarding my family, I can say that I am part of a family of artists, including my husband, my brother-in-law, my father-in-law, who are both painters as well. This is why my family and artistic life are cohabitating naturally with each-other. Very often intensive artistic discussions and debates constitute a daily part of my life. However, peculiarity stays with the fact that we are all different, with everyone searching and creating while preserving their individuality and ‘face’.

Statement written by the artist in consultation with Adela Demetja (2022).