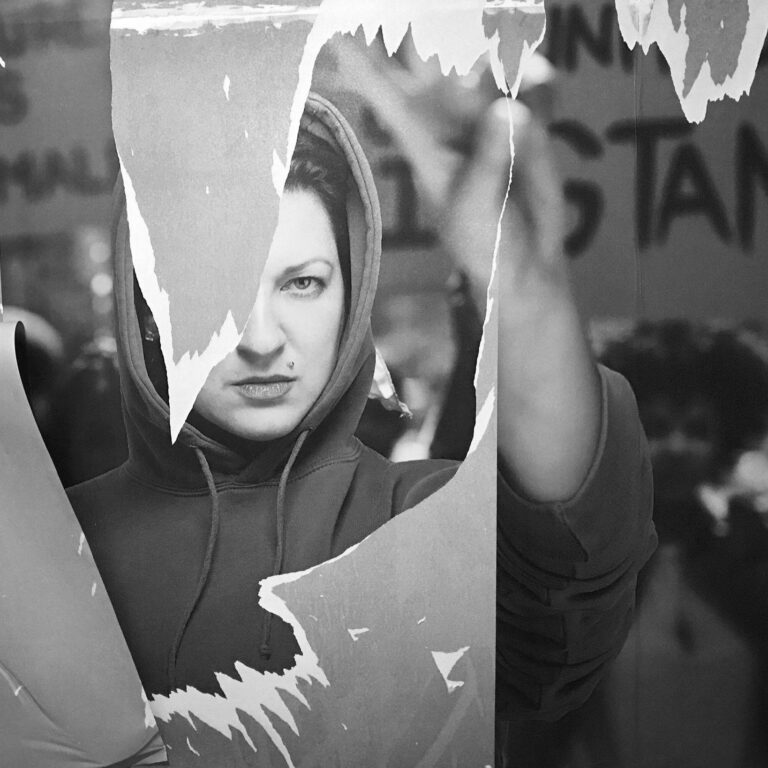 – born in 1975. She is a Slovak artist, curator and documentary filmmaker who lives and works in Prague. She is currently a PhD student at the Academy of Fine Arts in Prague. In 2005 she graduated at the Department of New Media, Academy of Fine Arts in Prague. In 1999 she studied at the Department of Art, Bezazel Academy of Fine Arts and Design in Jerusalem. Between 1997-98 she studied at the Department of Painting, Academy of Fine Arts in Bratislava, and between 1996-97 she was a student at the Avni – Institute of Fine Arts in Tel Aviv. She uses art as a tool to activate society. Through simplifying means such as irony and parody, she opposes neo-conservative tendencies, criticizing this way the culture of political representation. She uses new media, most often video and performance, as a form of her messages. She creates fictitious video-documents and seeks ways to intervene in public space. Her outputs are straightforward, based on good dramaturgy of individual performances and sensitive timing. In her works she deals mainly with the position of minorities, xenophobia, racism, nationalism, queer themes, and the Middle East conflict. In 2009 she founded the women’s art group 5. Kolóna (5th Column) and in 2013 the group Romane Kale Panthera / Rómske čierne pantery (Roma Black Panthers), which organize events on the border of political art and activism. Within her PhD. studies, Moyzes founded the gallery “Artivist_lab”, which main idea is to connect interdisciplinary active people who respond to social, societal, and political issues. One of the intentions of the gallery is to connect various departments of Charles University in joint projects together with an AVU student. Since 2019, the gallery has collaborated with non-profit organizations such as Člověk v tísni (People in Need), Slovo 21 and Prague Pride. The gallery is a kind of laboratory where exhibitions, discussions, workshops, and lectures take place, where philosophers, sociologists, journalists, artists, and activists should meet in interaction with each exhibition. Her work Museum of Ethnology III (2015) was included in the publication Art and Theory of Post-1989 Central and Eastern Europe: A Critical Anthology, 2018, published by the Museum of modern art – MOMA – in New York.

As an artist, I am committed to feminism. My entrance exams for high school and university in Slovakia were accompanied by sexism, I was clearly told that I take the place of a man, because I end up like any woman with children in the household, precisely at the “stove”1. he art career is for men! Sexual harassment by older professors was my everyday reality during my studies, whether in Israel or Slovakia. My role models were women artists and curators – I finally felt that the study concerned me that it was about me. Every single woman lost in history means a lost chance for young currently studying girl. But most of all, it is a huge and tragic loss for art, culture, and whole society. This disappearance of female authors from the Czech scene is the result of a social approach, to which it is enough to name only current statistics: Academy of Fine Arts in Prague (AVU) and Academy of Arts, Architecture and Design in Prague (UMPRUM) are still waiting for their first female rector. Since its foundation (1799) a total of 5 women have led the studio at the Academy of Fine Arts. In its 27 years of existence only one Czech woman artist had a solo exhibition at the Rudolfinum Gallery in Prague! Another problem is the premature elimination of socio-economic differences in Europe between women from East and West! Demolishing gendered traditions is very important to me. My husband took my surname at our wedding, just so that our child could have the surname of both parents. I wanted to disrupt the gender tradition, based on which the child is given a name only across the male line, and therefore only men have the right to continue the family2!

My art is a direct intervention into public space or events – I do not comment on reality from a distance, but intensively enter the centre of events with my Artivism3 – a novelty with which I thematize activist efforts in the field of art and break the “mythological” consciousness of artistic strategies in contemporary art. Artivism has brought a new language of creative radical performance to the public. The essence of my PhD research is the relationship between artivism and the media. In my artistic practice, I point out cases where art meets or even unites with activism. I examine whether Artivism is a young art form, or a movement, or just an attitude and practice that exists on the fertile boundaries between art and activism. Art is the only social form in which the law of “Freedom of speech” works, this freedom of course has different boundaries in a democratic country and a totalitarian country, or currently in a patriarchal neoliberalist-clerical fascist world, which in the name of nationalism denies rights to women or the LGBTIQ community. However, if artists are well acquainted with the rights of their country, they will always find holes in the law that allow art to usurp social change on its behalf, to create a protest called happening and to find freedom in a lack of freedom. For years we have criticized that art has become alienated from mainstream society, that it has become elitist, now it is time to bring it back where it belongs, Artivism returns art back to mainstream society. As was the case in my work:

Česká delegácia pri pamätníku Jad Vašem v Izreali (Czech delegation at the Yad Vashem Memorial in Israel), 2011 – the result of the project was the fact that a senior official of the Ministry of Education, Ladislav Bátora, was fired after an international scandal4.

Zevling – Duchcov, 2016 – (with Romane Kale Panthera) – based on this performance and media pressure, senator Václav Láska and ombudsman Anna Šabatová seriously tried to change the law “Zero Tolerance”, but in the end they failed in their intention6.

Okamurova horúčka spôsobuje popieranie holokaustu (Okamura fever causes Holocaust denial), 20187 – (with Romane Kale Panthera) – Prime Minister Andrej Babiš, among other politicians, who similarly denied the Roma Holocaust the year before accepted the package, but then took political advantage of our action. Following this, the pig farm at Lety was purchased8.

Uncover / Odkryv, 20199 – in response to the project, the municipality began returning paving stones made of Jewish tombstones to the Jewish Religious Community10.

The text was written in collaboration with Denisa Tomková (2020).

Denisa Tomkova is a Slovak-born, Berlin-based and UK and US-educated researcher and writer. She gained her PhD from the University of Aberdeen in the UK. Between 2015- 2018, she was a member of the international research project ‘Comparing WE’s. Cosmopolitanism. Emancipation. Postcoloniality’ based at the University of Lisbon. She taught the Introduction to Visual Culture class and was a guest lecturer in the Performance Art Class at the University of Aberdeen. She was a Research Fellow for the European Roma Institute for Arts and Culture (ERIAC) in Berlin. In April 2020, she curated an online group exhibition Performing the Museum at ERIAC which questioned the absence of Roma representation in arts and culture spaces. She contributed to journals such as Third Text, Yishu: Journal of Contemporary Chinese Art, ARTMargins Online, L’Internationale Online, Camera Austria, Profil – súčasného vytvarného umenia, H- SHERA, Berlin Art Link, Kuba Paris and Magis Iteso.