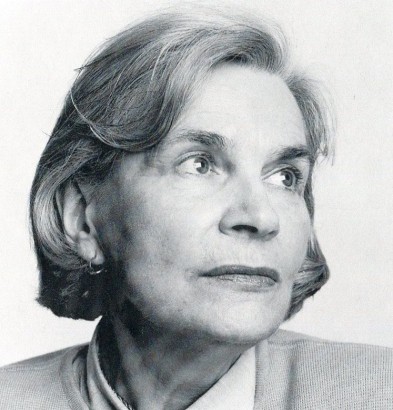 (maiden name Helclová) – born in 1923, died in 2010 – is one of the institutionally untrained artists. In 1949, she married the poet and artist Jiří Kolář, became ill four years later, and soon began to devote herself more systematically to art. In 1963, she became a member of the Křižovatka art group. She left Czechoslovakia with her husband in 1978, and did not return from Paris until 1999. At that time, her collages and assemblages were gaining wider attention and awards, and were still presented at the Documenta in Kassel (2007).

“I didn’t rush to be an artist. I was aware that I would have to fight for my art.”1 Her friendships with artists instigated Běla Kolářová’s desire to create something.”I didn’t enjoy photographing people very much,” she said at the beginning of her artistic career, which is connected both with the camera and with its subsequent abandonment. “One day in early 1961, the phrase “The whole world has been photographed” struck me like lightning. Was that a statement by Cartier-Bresson or another photographer? I don’t remember that. However, what did not disappear from my memory was the despondency that seized me. (…) So is there nothing left but to pile up what is seen upon what had been seem for a hundred times before, to modify what has long been discovered? Was the whole world really registered by simply pressing the shutter button? Is there anything left?”2

Kolářová did not want to accept such a fact. “Every opening of the eyes, every view of the people around, of the landscape, the street, the house, the tree, the everyday or curious object or situation was accompanied by the question: Who, when, how did they see it? And suddenly I began to discover a world that was left aside, unnoticed by photographers. ”Běla was fascinated by the petty and mundane things, necessary and at the same time obvious. “Even these little things, parts of daily-used devices that we can barely notice and end up with annoyance, newspaper pages, quickly overlooked every day, discarded expired tickets as well as cellophane, in which the candy we just ate was wrapped, they also form part of me, our life, they also testify about me, about us, and they are also worth noting.” Thinking how to capture this garbage of nature or civilization lead the artist to projecting them onto a bromine paper, imprinting them into wax or applying the technique of artificial negative. “I was amazed at how the number of items to be “photographed” grew during my work, what surprises they gave me under the magnifier.”3

Kolářová continued her experiments in the darkroom until she came to spatial assemblage through derealized portraits and arranged photographs. “The camera limited me, it wasn’t enough for me again. A second shot of the arranged objects, their black-and-white image permanently captured in time, cannot tell how these objects change, shine and go out according to the light, as they come to life with their own shadows. So I stopped photographing and started gluing.” She set about building regular structures, geometric patterns and rasters from everyday non-artistic objects, and toying with their meanings and references with special humor and playfulness. “The surrounding world disappears, hands play with objects, combine their position, looking for an expression to which words fall short. And suddenly that’s it,”4 – a collage or assemblage is done on the artist’s desk.56

“I realized that I was a woman, that I couldn’t make some big objects, that I would not manage that. I focused more or less on what was to be achieved in our household. ”This is where Běla let potato and onion peels, poppy seeds, carp scales, egg or nut shells, porcelain shards, matches, razors or needles penetrate into her art. She made poems from strands of hair, and drawings from imprints of make-up and lipsticks. She allowed fruit, sausage, gingerbread hearts and baked Easter lambs to enter the gallery in 1969, and in 1981 she told her life story with the help of a snap fastener. It is the choice of material that encourages associations, for which her work is still often characterized as “programmatically female”. “It simply came to my notice then. I wanted to make a deliberate difference,” the artist said retrospectively, thinking of the other members of the constructivist group Křižovatka. In this context, art historian Marie Klimešová speaks of the work of her friend as a silent form of provocation: “Where men solved abstract concepts and manipulated pure geometric elements, Běla Kolářová remained concrete and personal, but with the same sensitivity to the principle of mathematical variation.”7

“I was not just a shadow!” Běla’s marriage – less so divorce and temporary separation – with Jiří Kolář became the perpetually analyzed motif of her biography. Their different positions on the art scene are remembered (while Kolář has been considered a leading figure in local culture since the 1940s, her work has long been overlooked); their mutual creative influences are discussed, which in various periods is evidenced mainly by the application of similar artistic principles (“He often gave me some stimulus, impulse. Like many others. It was a kind of education in the beginning, remember that I was nine years younger. He already had his Group 42, I had nothing.”)8; and the dynamics of their private relationship has also been thematized (“You know, I always had to cheat on art. I had to cook, take care…”)9. Kolářová also fed the family and objected to being just a “woman by the stove” for her husband: “That was his slogan, but it wasn’t really like that. We understood each other very well. We were happy, Kolář was generous and free-spirited, although I had to take care of the household and the like, but I also had space for my own work. My traditional role suited me. We also lasted fifty-five years together, even though he was not always a faithful husband. I knew it, I was making a little bit of scenes, but what was I supposed to do.”

Běla Kolářová preferred to create in peace and quiet. “I’ve always been more of a shy nature and I was never pushy.” She never cared much about the art world’s attention. “I don’t consider myself a great artist. My work was not accepted at all, but I still went on my way. In fact, I considered my work play that has made me very happy.”

The text was written by Kristýna Péčová (2021).

Kristýna Péčová – born 1993 – is an art historian and curator. She focuses mainly on the art of the 20th and 21st centuries, in which she likes to break down the boundaries between so-called higher and lower, fine and applied arts. She is currently working at the Department of Fine Arts of the Academy of Arts, Architecture and Design in Prague and she is preparing the next edition of the International Symposium of Ceramics in Bechyně.