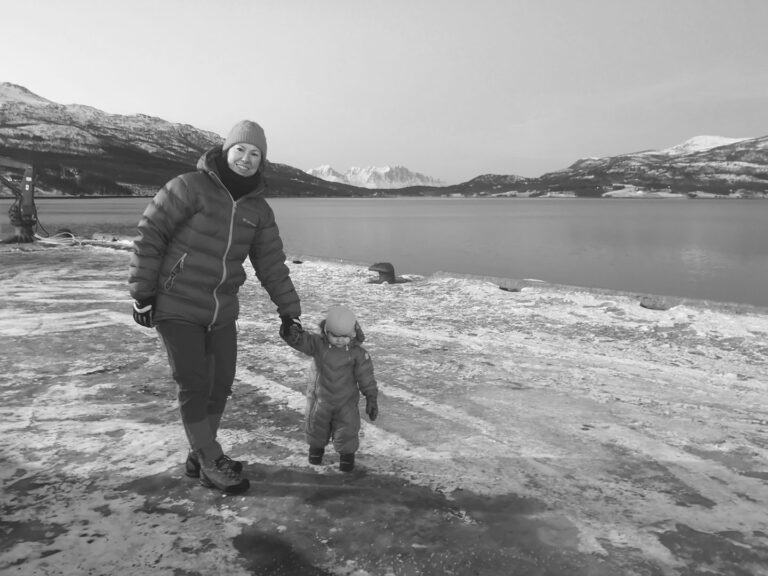 – born in 1976. Isabela combines various approaches and methods in her practice, working as an artist, architect, sociologist and ethnographer. First of her works revolved around disciplines of art, design and architecture. Over time, she shifted her focus to the problematics of social dimensions of urban planning and architecture. For the last couple of years Grosseova has been exploring the theme of three interlacing figures-surfaces, mediating a peculiar triangle: artist – viewer – exhibition. In projects for which she invites viewers to participate, the boundary between the creator and the viewer becomes suspended and indefinite. She is one of the first Czech artists who, through her engaged practice, creates evaluative projects within institutional or post-colonial discourse. Currently, along with Dominik Lang she runs sculpture studio at UMPRUM in Prague.

„I applied for the painting studio, which I thought it’s quite ambitious.

It’s without any compromise. (…)

It really felt like I’m working on my future, and dream job, dream career,

She became interested in art as a child. Her mother, a sculptor herself, supported her in the first artistic attempts. Despite fondness for the world of numbers and mathematical equations, she decided to attend art high school. Later on, she started her university studies at the painting studio of AVU (Fine Arts Academy in Prague).

When asked about her visions for artistic work, career and life after the Academy, she admitted that at the beginning of her studies, these visions were naive, drew from the older generation of artists, the generation of her mother and her friends, who had been spending their time creating works in their ateliers, to sell it via Podnik Dílo. Everything seemed much easier and they looked happy, being able to do what they love and make a living. However, when Grosseova graduated the Academy, she realized the reality has little to do with what she remembered watching artists as a teenager.

“Artistic thinking which can be introduced in different professions, which happened to me in my architecture path.”2

After her graduation, Isabela worked as an architect and member of Josef Pleskot studio in Prague. What seemed to be a dream job at first became hardly stimulating after five years. During that time she met her partner and co-creator of future projects, Jaspear Alvear, who convinced her to quit her studio job and start working for herself. Grosseova began internship with New York architect and artist, Vito Acconci. Despite it being a six-month internship paid with lunches, it inspired Isabela to return to art, because “architecture cannot grasp all the topics, working pragmatically it cannot face the most complicated issues”3.

“My credibility at the moment is based on the failure of other artists. And this is a very problematic moment”4

After several years of building a career in architecture, Grosseova came back to solo artistic practice. The theme of artists of the dark matter of art became the focal point of her considerations. She focused her attention on the “invisible” graduates of artistic studies. Her PhD dissertation, „Gravity of Artistic Competence”, subtitled “The Unplanned Connection of Art and Life”, treats on commercialized art education in a Neo-liberal economic politics, where graduates of art studies finish their education to function parallel to the art world, making a living through precarious work. Thus, the demand, supply and competitive equation is an experience without an alternative – a dictate defining success – circulation in the art world or failure, coupled with unprofitability and coercion to adopt half-measures. During her four-year research, Grosseova conducted several dozen interviews with the Academy graduates who were pushed into various, often surprising professions to provide for themselves. There was a painter, who ran a therapeutic practice, an artist who became a priest (however, he saw it as one of his art projects), or a conceptual artist, who trades in real estate. “It is very hard to admit to abandoning art, people blame themselves for it.” The artist examines how the creative potential can be utilized outside of the realm of art, in lines of work that can hardly be described as creative.

In 2005 Grosseova started cooperation with Jasper Alvaer. Among other projects, they created “Transculture”, a three-act project devoted to problematics of social awareness and European identity facing progressing globalization5. The duo drove along the borders of the European Union – from North Africa all the way to the north of Norway. They gave voice to provincial capitalism, looked at peripheries of the euro-centric map. The trip became a project registering accidental materiality of everyday, unregulated trade – local products sold by roadside vendors. Random meetings were registered through photography and by artifacts: the collection of purchased items, which attempt to capture the culture of “things” as a medium itself, communicating much more than circulation of goods on its own. The artists created a material-symbolic interpretation of everyday life scenography in the context of micro-history and anthropology of daily life, which allowed to reveal further purposes and meanings.

The first installment of the “Transculture” project (2006)6 was the exhibition at the Atrium of Moravska Gallery in Brno, where the artists showed artifacts from Czech collection, both public and private, coming from the countries, which they visited during their trip. The objects on display were supplemented with descriptions of the context of the journey of these objects to the Czech collection, as well as items from their private archive – what they gathered throughout their trip. However, the real focal point of the project were people – meetings they experienced along the way. Five of them attended the exhibition in Brno and shared their experiences with the viewers in a form of public debates, presentations and film screenings.

One year later, the project was continued in Krakow’s Bunker of Art, by the name “Figure and Ground” (2007)7. The exhibition, curated by Anna Smolak and Magdalena Ujma, presented the journey along North Africa and Eastern Europe, documented with a series of photographs depicting roadside vendors and their goods in a local cultural / landscape context. Thus, it was focused on what is marginal, what takes part in perception parallel and fully subordinate. The products the artists brought from their journey were also presented along with recordings of specialists, talking about historical and cultural contexts of plants, fruit and vegetables, reflecting the history of migrations, discoveries, trade routes and global trade agreements. At the time, Poland had been a member of the EU for only three years. Grosseova and Alvear analyzed how it affected the landscape of the European outskirts, peripheries of peripheries, focusing their attention towards margins of reality outside the media narration of the mainstream. The Polish edition was enriched by comments from Piotr Bikont, Robert Makłowicz, Łukasz Łuczaj and others.

During Grosseova’s research for her PhD dissertation, she created three research exhibitions: “Competence” (2015) in Fotograf Gallery in Prague (cooperation with Jasper Alvear and Jiří Ptáčkek, “Vůbec mne nezajímaly výstavy” [I didn’t care about the exhibitions] in AVU Gallery (2017) and “Průraz” [Certificate] in Entrance Gallery (2017). In the first one, Grosseova researched the concept of artistic competence. The exhibition’s goal was to spark a creative potential among recipients, their engagement to be the key element of the exhibition. Each visitor was to face the classic task for young adepts of art: create a drawing of their own hand9. All of the drawings remained in the gallery, becoming part of the exhibition. The viewers’ experience was enriched with recordings of conversations with art graduates, who did not continue their career in art, for example mister J., who started a prosperous computer company after graduating art (however, as he states, he knows little about computers.)

In her work Grosseova blurs the boundaries between the creator and the recipient, giving priority to the latter. In a way she became a catalyst, which along with the audience dissolves her role of professional artist. The viewers experience the creative process and the experiences themselves become works of art.

“I don’t work with external topics. The central point of my practice is my life.”10

Written in cooperation with Jolanta Nowaczyk (2021).

„I applied for the painting studio, which I thought it’s quite ambitious.

It’s without any compromise. (…)

It really felt like I’m working on my future, and dream job, dream career,

„Artistic thinking which can be introduced in different professions, which happened to me in my architecture path.”2

“Is it possible to view the resignation from an artistic career as positive in some cases?

Is it possible to imbue the non-artistic world with artistic competence?”8