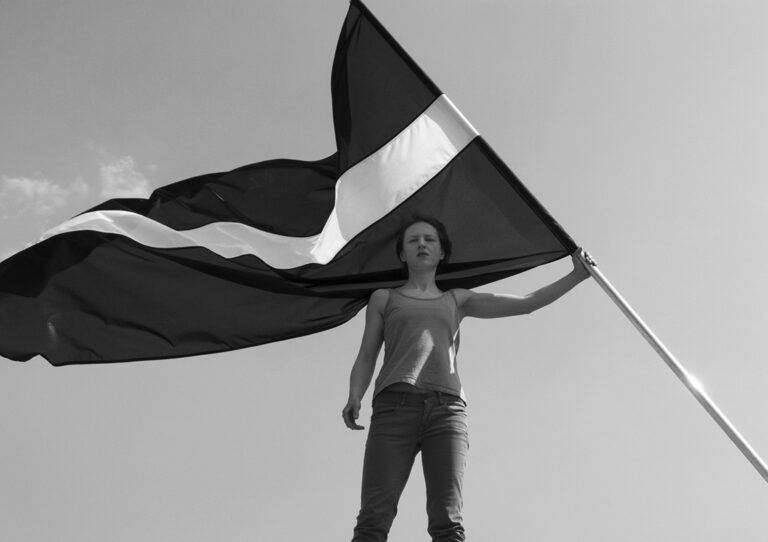 – born in 1975 in Minsk, Belarus. She graduated from the A.K. Glebova Minsk Art College and from the Monumental and Decorative painting Department of the Belarusian State Academy of Arts. She continued her studies at Le Fresnoy — National Studio for Contemporary Art in France, then at Düsseldorf Academy of Fine Arts (classes of David Rabinovitch and Daniel Buren) and the Cologne Academy of Media Arts (KHM). She uses new technologies to rethink the forms of interaction between the work of art and the surrounding space. Reduction of the pictorial, rejection of narrative, analytical approach to the media used, and the active inclusion of the exhibition space as an equal element of the multimedia installation are the defining principles of her work. A recipient of the Düsseldorf Art Prize. Her works are featured in archive of the IMAI (Inter Media Art Institute) collection and are included in private collections in Switzerland, France, Germany, and Belarus. A permanent public space installation by Anna Sokolova and Oleg Yushko can be seen in Mechelen (Belgium). She has been exhibited in Germany (Kunstmuseum Bonn, European Media Art Festival Osnabrück, New Talents Biennale Cologne, NRW-Forum Düsseldorf, among others), Belarus, France, Brazil, China, and other countries. Since 2005, she has been living and working in Düsseldorf.

When and where I was starting my studies, new media were not a thing. Since my mother is a sculptor1 and my father is a painter2, I chose monumental painting, a kind of synthesis of the two.

The Monumental Painting Department of the Belarusian Academy of Arts, despite its extreme conservatism and complete detachment from the world of contemporary art, set the direction in which I have been moving ever since. Monumental art teaches how to work with large objects and think in the context of architectural space. This, paradoxically, intersects with such a movement in art as site-specific installation.

As an artist, I follow my own canon. One of the rules of this canon is to interact with a specific space. My task is to subordinate the space to my idea. To conquer it, to appropriate it, to make it integral to my work. It is important that the whole room or building be involved in my work. My material is moving image, video. Most people associate it with cinema, but what I do is not narrative in a cinematic sense. Video image for me is a dynamic form of light, which adds an extra dimension to a three-dimensional space.

I synthesize the image from footage that I take myself or I program it. Most of the time, I work with my own visual element, Linement — a stripe of light that moves against a black background34. For each new exhibition space, the rhythm and proportions of this video element are re-adjusted. Initially, I only showed Linement on CRT monitors. That was important because of the way CRT monitors work, with light literally poured outwards. I made several site-specific installations, Ornament, using CRT monitors, lining up at first four and then fourteen monitors vertically, in a column5, and then horizontally, in a line which was infinitely reflected by mirrors completely changing and overpowering the exhibition space6.  I wanted to develop this result of transformation and interaction further, and I began to use projection and video mapping when working with Linement78, to engage architectural forms as projection screens.

I have turned to Linement over and over again, sometimes transforming it into a material object910 or bringing it back to video reality, but in a new quality1112. Although it lacks lexical meaning, Linement is akin to a canonical text organized according to the principle of musical structure. Its dogmatically sequential system of signs does not convey a specific meaning but brings to understanding on an emotional, pre-linguistic level.

Text is important to me as a form that exists in time and space, the perception of which becomes deeper and more complex when it is integrated into an art object. Therefore, apart from the theme of Linement — light in space — I also work with the theme of text in space. I subject text, like light, to a medial transformation, tying its perception to a certain time interval and a specific space.

In One poem between the window and the black wall13, the text is literally suspended in the space between a window and a black wall, inviting the viewer to reflect on the nature of perception. In this work, it is based on the comparison of the three different time cycles of the objects mentioned in the title: the daily cycle of light outside the window, the hourly cycle of the running text of the poem, and the timeless monochrome black wall. In the installation Understand/Feel14, the viewer can interact with the text and decipher parts of it by dipping a hand into the water through which the text is projected. What matters to me here is the experience of sensual interaction with the text, the intuitive search for the key to reading and understanding it. In the audio installation One art. One place15, a radical text about art is broadcast through the audio system of a church building, countering religious dogmatism with an artistic one, and filling the empty space with a powerful, almost tangible presence. In the kinetic audiovisual object One shape, one square, one execution, one transcendence16, the text that is read aloud is transformed into a physical force that is literally pushing a black square.

The above works testify to my interest in the art of Barnett Newman17 and Ad Reinhardt18. As for the technical implementation of the installations, none of them would have been possible without the support of the artist Oleg Yushko19. Communication with Oleg and my parents, Tamara Sokolova and Sergey Kiryushchenko, is an important part of my creative process.