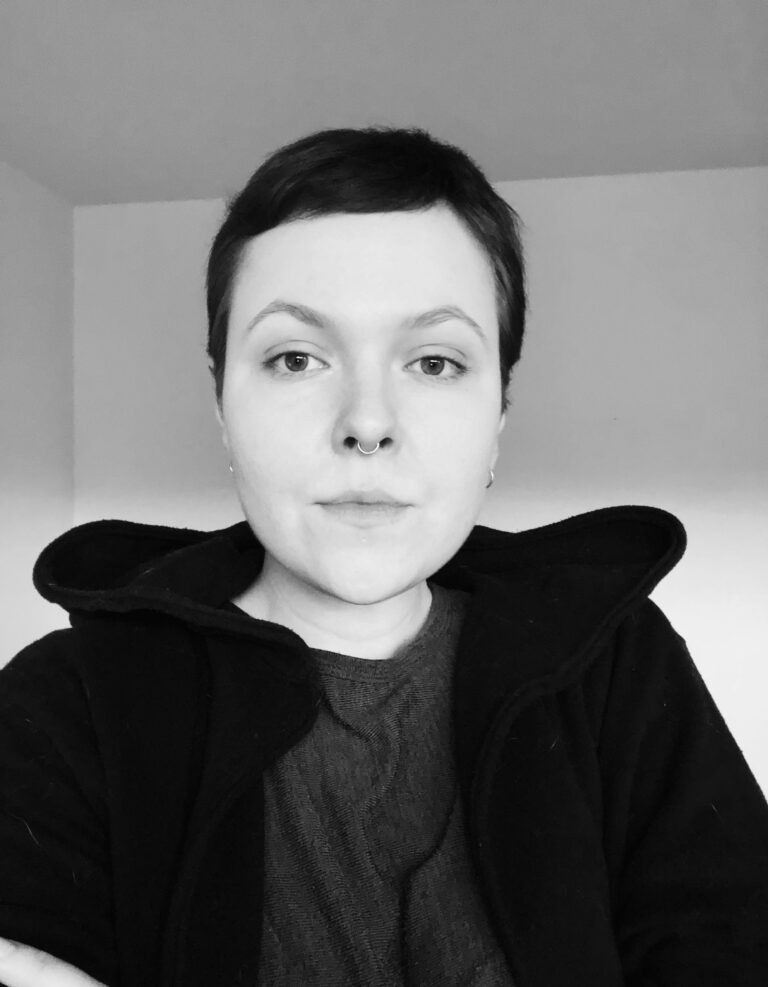 – born in 1993. She completed her master’s degree at the Ceramics Studio at the Academy of Fine Arts in Bratislava in 2018, she specializes in applied art and works mainly in the medium of ceramics. Afterwards she completed study stays in Wroclaw and Jerusalem and an internship in Monika Grabuschnigg’s studio in Berlin. In 2016 she won the Collection of the Year award at BADW with her collection, which she subsequently presented at the Prague Designblok in the prestigious Diploma selection category, in 2017 she exhibited her work at Talent in Munich, appeared in several Slovak and foreign articles, and was also part of the Slovak National Gallery exhibition Out of the (Potter’s) Wheel in Pezinok. In 2017, she and her colleagues opened the exhibition KKK in the Nitra Gallery. In 2018, with her work within the Miksmitte project, she won the BADW main prize, and together with her colleague Štefan Sekáč they became the faces of BADW 2019. The project was also presented at the Designblok 2018 in Prague, for which they were nominated for the Czech Grand Design award for The best table accessory. Her diploma thesis was part of the Diploma Selection at the Prague Designblok 2018. In 2020 she presented her work at the exhibition 1000 Vases in Paris, as part of the curated Arthouse Designblok Prague, at the KHG in Berlin and at BADW 2020. In 2021 her work will be presented in the gallery La peau de I´ours in Brussels, at the Photoport Gallery in Bratislava and Paris during the Salon Révélations.

Zuzana Svatík is a visual artist who works mainly in the medium of ceramics and in her work critically re-evaluates the function and potential of applied art in contemporary society. For Zuzana Svatík, ceramics – and applied arts in general – have enormous potential to bring, in addition to the aesthetic and utilitarian functions with which it is traditionally associated, added value in the form of a critical and engaged position of work. Her work also has an educational dimension and focuses on exploring the possibilities of communication and mediating content to the public through design. Zuzana does not build her works as separate objects but creates an opportunity for dialogue with the outside world through them. In her work, the issue of gender equality, stereotypes concerning masculinity and femininity, the theme of adolescence or the search for one’s own identity often appears.

Zuzana Svatík uses mainly traditional, archetypal materials and forms in her work. She works with clay and porcelain and creates vases that retain their simple and functional shape. Although Zuzana does not approach to the invention of new forms, but to continuity, this decision has a critical and discursive dimension for her. Her choice is based on symbolism, social history, the social meanings that material and form carry. Zuzana Svatík perceives the vase as an archetype, an object of households and living rooms, directly connected with the feeling of home. However, it is also a metaphor for the stereotypical perception of a woman as a housewife and vain decorator. The object reflects these tendencies and common ideas and procedures, it is their irrational and ironic ridicule, while it does not lose its useful function and is therefore easily applicable to households operating in the spirit of these ideas.

When working with archetypes, Zuzana Svatík naturally gets to reflect on tradition and its role in contemporary applied art and in society in general. She does not perceive tradition as a static practice that is given, immutable and inviolable. She thinks of tradition as the transfer of knowledge, experience and activities, but also as the responsibility for choosing what deserves to be traded. She emphasizes the critical reassessment of continuity and the need for selection that responds to current social realities. Advocating the preservation of traditions at all costs is perceived as a negative phenomenon, especially when this discourse is misused to maintain a dysfunctional status quo, problematic practices, or systematic inequality. In such a case, she points out that it is not adequate to ask whether something should change, but whether there is something at all that should not change.

The critical and engaged contents that Zuzana processes in her works are legible especially through painting on vases. For Zuzana, vases do not only have to be decorated by flowers and abstract patterns, but can convey important and positive messages, reflect reality and current events, not excluding political movements. The content and theoretical level of Zuzana’s work focuses on contemporary gender stereotypes, their historical, social, and biological nature. It also examines the masculine and feminine nature of people, things and activities, the position of dominance and subordination, primarily through her own experience. She layers scenes and motives that can be contradictory, confusing, and disturbing, and the accumulation of their meanings increases tensions. She treats male and female bodies differently; those who look feminine are often objectified, naked and rigid, and resemble advertising photos, billboard campaigns or pornographic editorials. Their poses tend to be breakneck or absurd in relation to their surroundings. On Zuzana’s vases, these characters often appear in violent, erotic, or taboo situations, surrounded by racing cars, bears, sharks, tigers, which evoke traditionally understood masculinity. This contrast is a popular advertising strategy, where typically female characters are placed in dangerous or particularly masculine situations, thus fulfilling secret male desires. A woman exposed to violence and threatened by guns and knives is not just a product of the imagination – this position is in fact the embodiment of the danger she faces in the patriarchal system. However, Zuzana depicts these negative phenomena mainly to stimulate discussion and reflection123. In Zuzana’s practice, the very act of decorating and creating ceramics is associated with the reflection of traditionally masculine and feminine activities and related attributes. Zuzana points to stereotypical conventions in artistic creation and emphasizes that art in this sense does not differ significantly from other areas of human activity. Understandably, women are implicitly expected to have a different kind of art than men. If we know that the artist is a woman, we approach the work completely differently, although we are usually not aware of it. The fact that men and women are expected to work differently and perform differently is not just a specific feature of art – the art world is only a derivative of this broader problem. Zuzana Svatík draws on feminist theories, especially Simone de Beauvoir, Judith Butler or Chimamanda Ngozi Adichie. However, for her, feminism does not represent a special teaching or ideology, but a life attitude that aims to change society for the better. Although feminism is an essentially positive value, it is often presented in the public sphere as a conspiracy against traditional values. However, this only indicates that everything is not right with the so-called traditional values. Feminism is simply an expression of the fact that there are specific problems in the way our society works. For me, being a feminist means not being afraid to point out and solve these problems. This approach is seamlessly followed by another source of inspiration for Zuzana Svatík – the visual artist Roberto Lugo and his work based on activism through applied art. In this context, Zuzana emphasizes that politics today is basically unavoidable, because in a sense it has become a commodity that we are forced to consume. In the media, political content is presented solely for the purpose of evoking as many negative emotions as possible, which are a simple guarantee of profit. And it works very well – it rarely happens that political events do not arouse anger, disappointment, or disgust in me. This is inevitably reflected in my work. However, the ability of art to show things in completely new contexts can purify what is political from the onset of negativity and give it a certain ease. Politics can carry positive values; only in this sense is it an important aspect of my work.

There is a certain aspect of transformation in Zuzana Svatík’s work. In her 2016 project called IN & OUT (Dnu a von), she undergoes conceptual and social transformation motives that are mostly the result of petty vandalism and reckless treatment in the public areas of blocks of flats in the housing estate. A fundamental moment of work is the conflict between mine and ours, the conflict between closely interconnected spaces, which, however, evoke completely different needs for expression. After closing the door of the apartment, it is as if we lose barriers, consideration, and responsibility for our behaviour in the environment which we are also a part of and which we come into contact with every day. Responsibility for this type of behaviour is dampened by the anonymity and essentially invulnerability of the act, which will later be perceived as group, common to all residents of the house representing a larger group of people united only by this space. Zuzana transferred the mentioned motifs to the surface of the vases without any modifications and composed new, unexpected, absurd compositions. Within the creative process, the original motives go through several forms of semantic transformation. They used to be unwanted, repulsive, destructive elements in public space, but now, by moving into a new framework, they are paradoxically becoming a full-fledged and acceptable decoration. However, the second form of transformation takes place mainly in the social context. Anonymous drawings, inscriptions, or human behaviour itself return through vases to their culprits, to their apartments, where they must confront them again45678.

In 2019 and 2020, Zuzana moved to a more general level and explores the universal nature of symbols and the possibilities of creating narratives in the context of her objects. She connects well-known meanings with her own experience into hybrid stories, without losing sight of the nature and position of applied art; she does not deny it, nor does she try to change it fundamentally, she only works critically with its given functionality. In this way, Zuzana Svatík approaches religious motifs, especially depictions of saints, the Virgin Mary and Jesus Christ. These portraits are part of the intimate environment of people, but they also surround us in a public visual environment – often misused for specific political and power purposes. In response to this practice, Zuzana places religious figures in special relationships with other motives, intuitively combines her personal vision and experience with these easily recognizable motives and opens them to new connotations that free them from negative political content910.

In her work, Zuzana Svatík is looking for ways to further actively and critically develop applied art. She confronts its heritage, works with archetypal forms, and connects continuity with progressive content. She creates her art pieces in a way that they can take their place in contemporary discourses, engage in lively discussions with the audience and talk to society from their specific position, which has the potential to approach people in their everyday life. Finally, Zuzana Svatík says: The state of women’s, feminist or any other art in the countries of Central and Eastern Europe is not particularly positive. I don’t feel qualified to make any predictions, but I would like to believe that the future of art depends at least in part on what kind of art we create.

The text was written in collaboration with Viktória Beličáková (2021).