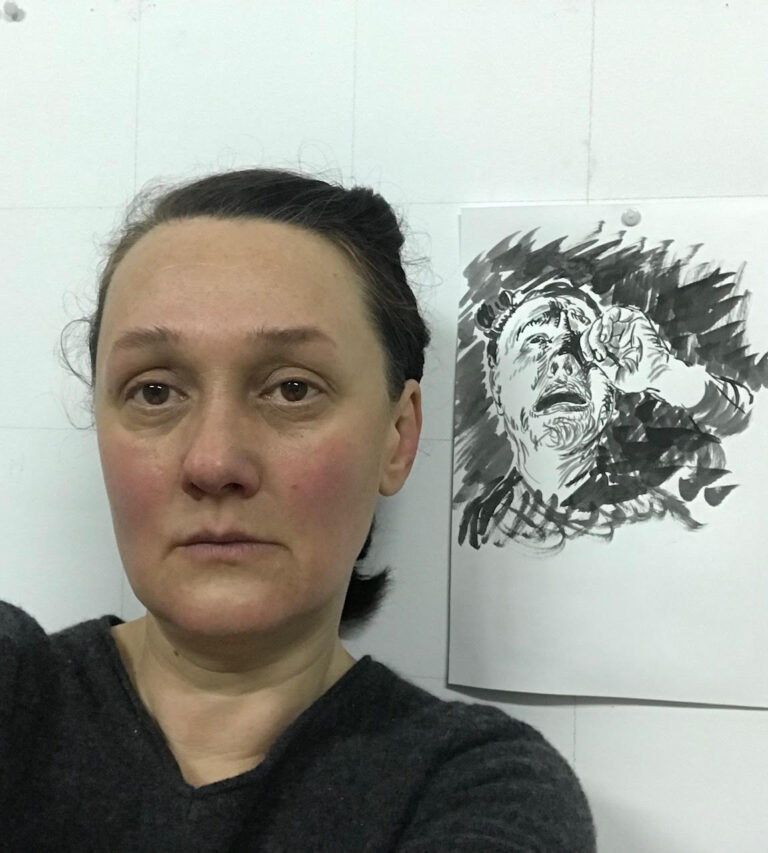 You have been living in the Netherlands for more than twenty years – do you introduce yourself as a Dutch or a still Belarusian artist?

I am a Belarusian-Dutch artist. At the Royal Academy of Art, where I studied, we were asked to specify our nationalities, the administration mentioned mine as “NL/BY” and it has remained like this since then.

How did a Belarusian Academy student end up in the Netherlands 20 years ago?

When I graduated from the Academy of Arts in Minsk, around the mid-1990s, a sickle and a hammer were put back on the main square making it clear – it was not a place where I could live. I knew I had to leave the country.

I left later, in 1996 I was still saving money. Few friends of mine managed to enter the Belarusian State Academy of Arts and those who did faced humiliation. Later many got expelled and also starting to think about leaving for Europe to finish their studies abroad. The entire generation of artists moved elsewhere. The academy administration considered the Chair of Ceramics where I was studying to be not the most progressive direction and showed little interest in it, thus I was able to complete my education. Then I made a breakthrough, so to say, by the skin of my teeth and entered the Academy of Art in Amsterdam.

Did you feel a big difference in the academic process?

Could you give examples?

It just felt so good being at the Rietveld. Everyday life was very hard, but the environment I found myself in was so exciting that it compensated for all the hardships.

The education at the academy is free, students discuss with professors what they want to do, there is no “socialist” competition, there are absolutely mixed groups of students of different ages, nationalities, those well-versed and those with no education at all, impoverished refugees and children from rich families.

I had a Dutch friend who turned out to have Warhol’s flowers in her bedroom, while I was struggling to pay for toothpaste. And yet, we were getting on really well with her.

At the academy, I got access to the technical base. I was firing something daily – small pieces of clay and glazes – mixing, burning, and ruining a bunch of plates. But I also learned a lot, I really like all this chemistry.

And in Amsterdam itself there is a good artistic climate, there are many artists who, just like us, also have come from all around the world, there are numerous exhibitions in art galleries, exhibition spaces, clubs, and museums. One can aspire to be successful, which motivates a lot.

Was the Royal Academy your next step in European socialization?

Yes, I took a 2-years’ course at the Reijksakademie. It is a place that makes you put aside all your everyday problems. You have a studio, monthly scholarship and, most importantly, access to various technical workshops and assistants who help you put your ideas into life for free. And the main answer to the question “How can I do it?” was not the one that we used to have before, when we were said, “It is impossible, here you need less…” or “Oh, just forget about it and come with something less complicated!”. At the ReijksakademieI we heard, “Let’s think about how to do it!”

Have you always wanted to be an artist?

My dad is an art collector. Well, he was an athlete, a swimming coach, but somehow gradually grew into collecting. He really loves painting and among his friends there are many artists he enjoys socializing with and supporting. One day he brought home a small landscape by Nikolay Isaenko. I think it was the first painting that appeared in our house. It was a landscape in Gurzuf, smaller than A3 in size. A house on top of the mountain at distance covered in haze.

While looking at this artwork, I felt everything turning upside down inside me, I realized it was my cup of tea – painting, paints, and brushes…. When I grew up, I realized that at that moment there was some click of fate turning me into an artist. This landscape is now hanging in my bedroom. It was in 1979, I was seven years old.

Did you then you meet Nikolai Isayonok?

Yes, he was a family friend ruining himself in drink together with my dad. Both got heart attacks and both gave up drinking – well, all as usual. For me, a seven-year-old child, those meetings were something extraordinary. Then I attended Khobotov’s art studio on Kalinowski Street in Minsk. And it was there that I met Anya Sokolova, I was ten, and she was seven years old.

And what was the Belarusian cultural and artistic field like in the 1980s?

The 1980s, especially the late 1980s, were a real buzz. I had a feeling that it was all new, somewhat very alive. “Nemiga-17” appeared. I knew every member of the association, at home we have the works of almost all the artists from “Nemiga-17”: Matievich, Kiryushchenko, Hobotov, Kuznetsov, Gorovaya, Sokolova, Litvinova, and Katkova.

Is there a Belarusian artist who has had a particular influence on you?

Well, Tamara Sokolova has influenced me a lot.

She has some specific taste, her approach, her own unique minimalism, a sense of material that I lacked. Do, it was Tamara who has had an impact on me – with the beauty of life or something.

How did you decide on your art medium? You are one of those who have been faithful to the chosen direction (ceramics) for decades.

Fortunately, when still in Minsk, I failed to enter the Department of Painting at the Academy and made an easy choice, which was ceramics – a less popular major with classes held in a separate building. All those who were studying monumental art and painting, went from their main building to our to moan and get distracted. At the Department of Painting and Monumental Art, the atmosphere was extremely unhealthy and humiliating.

In which way did it manifest itself?

Penniless professors full of complexes endlessly humiliated students and one another probably as well. At the Department of Ceramics, there was nothing of the kind. Fortunately, the administration based in the main building did not have time for us.

When in 2020 the students of the Belarusian Academy of Arts in Minsk went out to protest and ended up in prison, did it remind you of 1996 and your groupmates’ mass expulsions for their civil position?

The current situation is much worse – sadistic riot police armed with clubs did not run after us.

How does the current socio-political situation in Belarus affect your professional practice?

I believe we all need to pull together to organize exhibitions and campaigns, write letters to draw attention to the Belarusian problem. My life split into before and after August 2020. Before that, I had not been really willing to communicate with anyone, I left and rather wanted to forget these Belarusian ties in favor of something new. I wanted to change. And now that we are facing such a disaster, we need to help each other as much as possible.

Is it possible to convey such messages with ceramics?

I have already joked that for me ceramics is a practice that resists catastrophes. Here in Holland we have a well-known ceramic academy in Den Bosch, and once it was on fire. Absolutely everything perished in the fire, nothing remained – it was a city-wide catastrophe. Only students’ ceramic works survived. They were wiped off the soot, and that’s it – now they are bright and beautiful, as before.

I may be wrong, but you are the only Belarusian artist whose works were bought by the Stedelijk Museum in Amsterdam.

Yes, probably I am.

Which of your works became a part of the Stedelijk collection?

It’s a tea set that looks like it was once broken and then glued back together from different pieces. I created it to escape melancholy and nostalgia, in memory of my grandmother’s habit of gluing together broken porcelain pieces123. Another artwork is a series of trophy cups – the idea to make it also comes from my family history456. I brought some works to “The Frozen Fountain” gallery the status of which allows it to advise museums on whose artists’ pieces to purchase. And that was when everything started789.

Has this gallery started to represent you?

Yes, I am still an artist of this gallery. It’s been for twelve years already. The gallery advised them to buy my tea set. It is very difficult to work professionally without a gallery in Western Europe, so I am very glad that we are still cooperating.

Are you a commercially successful artist?

I don’t know, probably no. I’m just selling some pieces here and there. Now I am creating 3 small artworks for a London gallery.

That is, success in career has never been an end in itself?

It has certainly been. Even in order to get an independent artist’s visa and stay in the Netherlands.

Have you ever thought of bringing the national context of Belarusian ceramics into your work? If I didn’t know that Vika Mitrichenko is an artist who was born in Belarus, in Minsk, I would think you are a London artist whose works are sold in a prestigious gallery.

I don’t have any references to Belarusian ceramics, but all my works are based on family stories that took place mostly in Belarus. My grandmother’s Chinese cups, for example. Such typical Soviet poverty, when people might have nothing but still a grandmother would have beautiful cups in the sideboard and there would nothing more beautiful in the entire world. As a child, I used to open her sideboard and just sort through them.

When I arrived in Amsterdam, the first years were very difficult, I had to work hard to survive, and in the little free time I had from all my part-time jobs, I began to sculpt, breaking and gluing cups back. It was my therapy, my salvation from the problems. And suddenly my professor at the Academy said, “Listen, this is great, finish this work.” Or rather, I didn’t even show it to anyone, it was she to open my closet without asking, and for a European to open a personal closet and take something out of it is the top crime.

I finished the series of cups, and I am so grateful to my professor for that. I don’t remember anything else I did during my studies, but only these broken and glued pieces of history. They will remain with me forever.