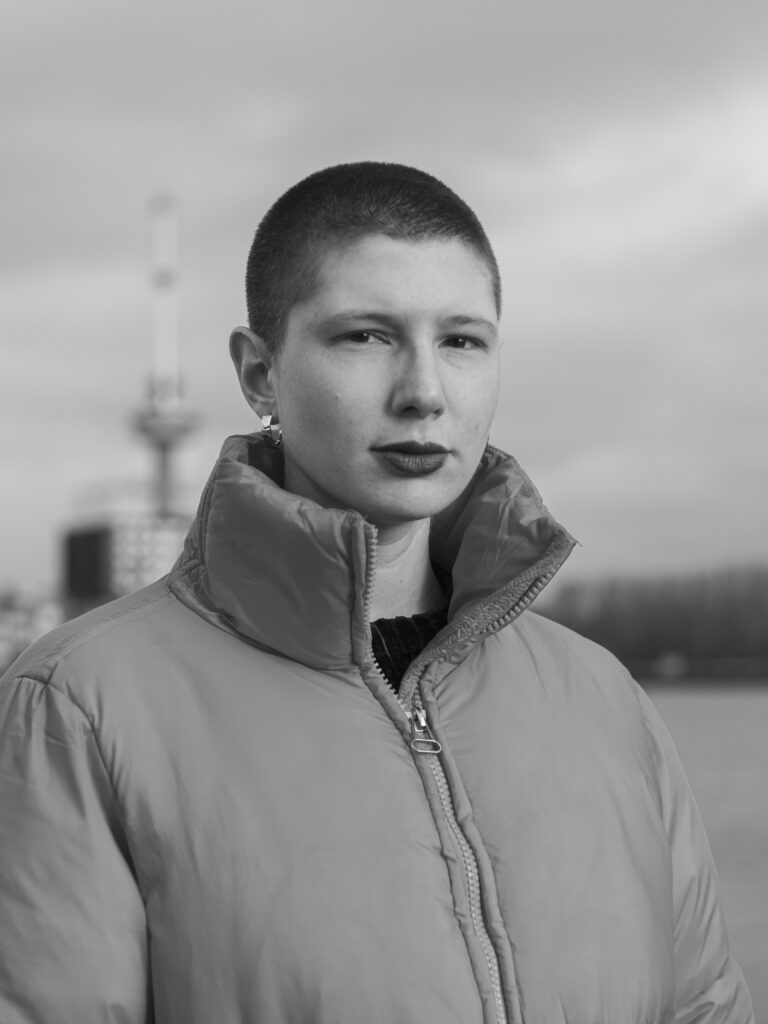 – born in 1991 Warsaw. artist and filmmaker currently based in Rotterdam. Studied Fine Arts at the University of Arts in Poznań, Academy of Art in Szczecin, and the Piet Zwart Institute in Rotterdam. She received fellowships from the Minister of Culture and National Heritage (2015), Młoda Polska (2016), Centrum Beeldende Kunst Rotterdam (2019), Stichting Niemeijer and Mondriaan Fonds (2020). Her works propose a form of poetic filmmaking towards assembling female lineages, nurtured by the entanglements of eastern European countries and their diasporas. She works collaboratively, and is involved with WET – a production and distribution cooperative for film, video and artists’ moving image. She is also a member of Filmwerkplaats, an artist-run 16mm film lab in Rotterdam.


Portrait of the artist by Nick Thomas.

In my work I use moving image to assemble fragmentary portraits of people, communities and places, exploring the affective textures of their lives. I am attentive to the histories that have shaped them, complicating them where possible and resisting linear timelines. My practice evolves in dialogue with other artists and film-makers, and I now frequently collaborate rather than working individually.

I often work with female subjects and biographies, especially those shaped by experiences of displacement. I am interested in the complicated entanglements of eastern European countries, and their diasporas, something which has become more acute since moving away from Poland myself in 2016. I want to know what can be learned and reclaimed from these histories and narratives, and how they shape people’s intersubjective experiences. My dual perspective – as both insider and outsider – has enabled me to see these narratives as a part of a shared political space, and as a catalyst for imagining alternative ways of living and working together.

Ideas around nostalgia, belonging and national identities also became pertinent in my work after relocating to Rotterdam. I live in the working class neighbourhood of Charlois, an area with a large Polish community, with whom I interact every day. Thinking about diasporic spaces of intimacy and care1, I filmed de Spiegel2 and Sohaila3, both depicting working class and immigrant women in places where labour and sociality entwine. Sohaila is a silent portrait of a hairdressers’ salon, and takes its name from one of the employees, whereas de Spiegel, which comprises a single, continuous shot, is set in my neighbourhood bar run by Alicja Dulak, who doubles as bartender and amateur singer. In the video she sings a Polish ballad while her regular customers engage in casual conversations around the bar; multiple languages entwine, altering viewers’ levels of access to the piece. For non-Polish audiences, the language operates solely on a non-verbal level, producing an opaque space narrated through gestures and conviviality.

Similarly, ‘Balkon van Europa’4, made in collaboration with Erika Roux5, touches on female working-class labour and identity. A female protagonist spends time in a snack bar located at the very tip of the Rotterdam harbour, on so-called ‘reclaimed land’6. Through its panoramic window, she looks onto the mouth of the river Maas, where cargo ships enter and exit Europe’s largest port. Composed of a series of locked off shots, the video reflects on the progression of time and acts of looking; it pursues snippets of narrative in order to break them down, and dissolve into surfaces, textures and compositions.

Following the thread of displacement, in 2019 I started working with my family archives. In an attempt to link them to my own lived experiences, I began to make connections between female bodies across generations and social-geographical contexts. ‘Camerawoman’7 draws on a film archive, shot on 8mm by my great aunt Maria Jastrzębska, who I never met. The reels are records of her daily life, travels and relationships in 1950s and ’60s Poland. Tapping into the fragmentary nature of an amateur archive, the work has had various iterations – as a book, a reading and a video installation8. ‘Camerawoman’ talks about gendered experiences, and the ways they are embodied in intimate visual records. For me, engaging with the archive, is also a process of assembling my own female lineage.

In my films I turn towards, and tune into the world, making records of precarious moments and gestures; I am interested in presenting ‘the world to be witnessed’9. I often use only images and sounds recorded on location, trusting they can carry their own weight. My documentary desire to witness the world goes hand in hand with an attentiveness to images and forms (a nod to my background as a painter). A generating force for my films lies in the capacity of the moving image to communicate and take stances through evocation and poetic juxtaposition, without conclusions. While employing an observational mode I want my work to allow for opacity and partiality, leaving space for a viewer to do the associative labour necessary to construct the world of the film. Inspiring examples of films sharing these qualities are ‘At the Time of the Ebb’10 by Alia Farid, the films of Kevin Everson, or works by individuals affiliated with Harvard’s Sensory Ethnography Lab11 such as ‘People’s Park’12 and ‘Foreign Parts’13.

Acting as a cameraperson for the majority of my films, I am interested in camerawork understood as a physical endeavour, acknowledging my own limitations and exploring the possibilities of a camera treated as an extension of my body. I believe that the relationships between subjects–their lived experiences and emotions–and the camera can be embodied in the camerawork. For me, filming is an interpersonal and investigative process, with the camera acting as both a poetic device, a means for facilitating encounters, and a tool for research.

Pursuing my interests in Polish colonial legacies, as well as following a family connection, part of my work has been situated in western Ukraine. An important part of this process has been to research historical and contemporary Ukrainian voices14. I became interested in processes of shaping identities and cultivating memory in the region, and in exploring alternative possibilities of living and working. I made a film ‘The Close River’15 in 2019 during a research trip to Hutsulshchyna I took with my partner and collaborator Nick Thomas16. With an itinerant camera, the film traces shifting borders and markers of power, drawing a poetic portrait of a place where histories of coexistence, violence and resistance are carved into the landscape.

In ‘The Close River’, as well as in another collaboration ‘Forces’17, both shot on 16mm film, we explored the possibilities of field recordings and non sync sound in order to evoke a place rather than represent it. ‘Forces’ was developed through letters and drawings which we then used as a script. We shot the film over a couple of summer days in two locations in Rotterdam, the urban island of Brienenoord and the port – filming each other in places chosen for a conjunction of symbolic and material forces in the landscape. ‘Forces’ is a film poem, a suspension of the present, an act of spending and wasting time together.

I’m currently working towards a mid-length film, made across multiple villages in Hutsulshchyna in collaboration with Nick Thomas and Khrystyna Bunii18 – a local researcher, activist and archivist. The film will take the form of a poetic documentary following Bunii as she carries out her amateur ethnographic research. On her field trips, she approaches inhabitants of Hutsul villages in order to scan family photographs and documents, and in doing so produces a vast digital archive of a heterogeneous culture, pursuing a political practice of self-narration. Through engaged camerawork, capturing spontaneous encounters, oral and musical accounts, the film will track the emergence of the archive in real time.

As well as working in collaboration I have always been involved in self-organising and grassroots activities, recognising the necessity of building independent structures of mutual support and dialogue. Between 2013-17 I was a co-founding member of Silverado19 and currently I am involved in WET, a production and distribution cooperative for film and video. At the core of the cooperative are the tenets of mutual assistance, sharing of expertise and exchange of labour. WET is also a platform for public presentation and facilitates film workshops informed by our collaborative research into feminist and collective filmmaking.

The text was written in collaboration with Magdalena Adameczek (2020).