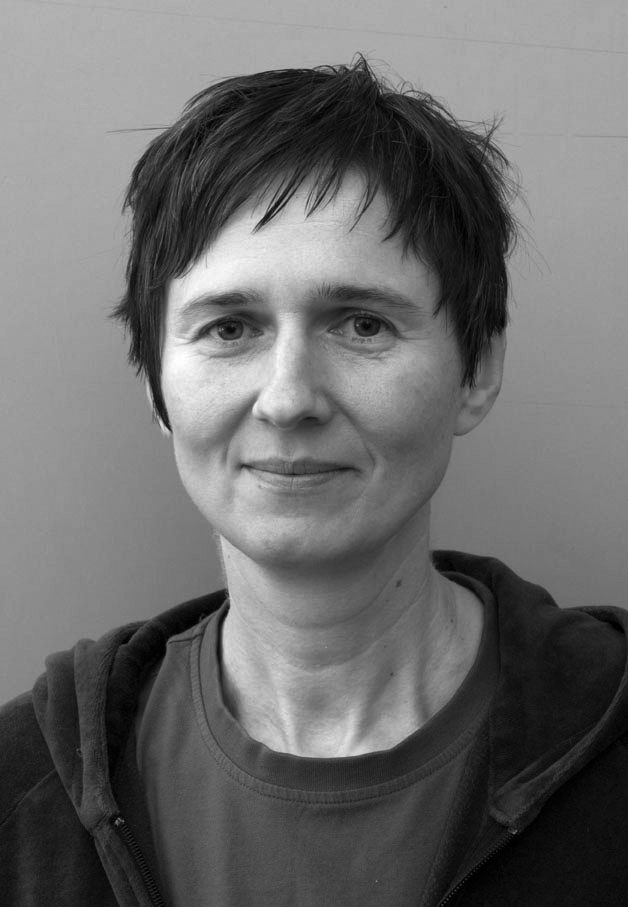 – born in 1966, Târgu Mureș, Romania. She studied at the Painting and Intermedia Department of the Hungarian University of Fine Arts. She graduated in painting and teaching in 1995. From 1997 to 1998 she studied at the Hochschule der Künste in Berlin. She has been teaching at the Hungarian University of Fine Arts since 2009, and is a senior lecturer since 2016. In 2019, she earned a DLA degree. Her practice unfolds in a variety of mediums (painting, graphics, photography, video, installation, community art projects) and connects seemingly distant concepts and phenomena through sensitive associations. Her work explores the functioning mechanisms of the human body and the soul, and is closely related to neo-conceptual art. Also calling on intuition and superimposing layers, she was initially building her pieces from organic materials, quoting biological illustrations. In the last 15 years, her attention has increasingly turned to the questions of the inner world of man, bringing to the fore topics such as trauma processing, healing and self-healing, as well as remembrance.

One of our basic activities in life is fighting for our identity: we try to define something that constantly changes. For me creation is about this quest. Thus the process of creating is also a dialogue between the world, the self and art. This is a dimension where these three elements are transforming to something else, if only temporarily. I see the purpose of art in this transformation; in forming and broadening the human consciousness. My aim is not to process a personal experience but I’m interested in a certain situation that allows me to build in, recreate and integrate my experiences as well.

An integral part of my artistic practice is revolving around basic, existential questions of humankind, such as death and trauma. I call the distance between me and my topic zoom in/zoom out, that can be the expression of scaling my understanding of being and reality. I often play with distance in time, I review important memories, I work with them conceptually, such as in my work Invisible Plan, or in the video Double/Trouble, where I experimented with various states of mind.

In my early works the self hides behind a symbolic, abstract objectivity. After an artistic silence caused by a tragedy in my private life in 2004 I tried to process the situation from the viewpoint of “immersing myself to the fullest”. My series Anything can happen to Teddy manifests this point of view1. Teddy, the protagonist of the series shaped the narrative frame for me, so I could talk about things that are otherwise taboos. The works are connected to my personal story but as parts of a fictional visual narrative they move apart from me as well.

I was always interested in human vulnerability and fragility of individual lives. Thus, in the beginning of my career it was also a trauma that prompted me to create objects and installations. Besides other organic materials, I often used paraffin that represents death, faith, conservation (as an experiment of manipulating time), and healing2.

Working with traumas can be grasped by the transitivity of the things we can control and those we cannot; and by the transition between personal experience and some kind of material. For me watercolour in the best possible way to visualize this relationship. This is the medium which holds me in the present moment, that can capture my attention during the process of creation and it also keeps me in motion and absorbs me. It simultaneously creates space for being focused and being open for uncertainties, possibilities, eventuality, coincidence and surprise. Yet I am able to control it. I am subordinated by the function of the material during the process. The material and my intention make me dynamic and that is what creates the whole procedure experiential3.

This way of expression is not exclusive: when I am interested in something, I try to find various media and I revolve around the possibilities of expression. A situation, a topic or a question comes up first and determines what I will work with. I am interested in sciences, not only art history and cultural history, but psychology too; and from natural sciences biology, which fascinated me for a long time. I like to detect things around me, but with a poetic and personal approach4. For example my works Denatured, Laboratory sample5 or Pigmentatio mundi6 are like that, or my series about environmental issues created in Bitterfeld7.

Research is a part of my practice, but its determining role and extent depends on the nature of the artwork in question. A conceptual piece of art requires another kind of research, such as the “completion”8 of the 1938 issue of the German dictionary called Duden with pages about Jewish religion and culture, or my DLA dissertation (2019) in which I am dealing with trauma.

Female perspective is strongly present in my work, but I don’t use striking elements, the attitude that is closest to me is not the feminist, political or activist point of view. Nevertheless, I worked on a community project dealing with issues connected to women in which I collaborated with seamstresses and I focused on their social situation9. As a private person I try to express my opinion and participate in public life. What I see around me, i.e. hate and nationalism are repelling for me, because I have experienced these living in the Ceausescu regime as an ethnic minority.

Being a member of the Hungarian population located outside current-day Hungary, a “second-hand identity” followed me in my life since my childhood. Living in Târgu Mureș I was always longing for someplace else. Now I know that the provincialism I was suffering from is typical for the whole Eastern European region.

My experiences as a member of a minority and my investigations about my family’s memory inspired artworks such as the Transitory objects project. The suddenly found Hungarian court dress of my grandmother recalled a chain of stories from the history of my family and prompted me to dig deeper in the topic. One part of this project is the video called Trans-national10 in which I am wearing my grandmother’s dress, walking with a suitcase and grocery bags from the door of my apartment in Pest to the Buda side through symbolic sites of the city, and then back again. The body crossing the bridge became a bridge itself as well between past and present, its ancestor and itself, Transylvania and Hungary and between departures and arrivals. However the baggages make the whole marching, ironic so it alludes to the issues of immigration, homeland and the faith of women as well. The series Family Album (2014-2018)11 is a continuation of this project, consisting of cut out photos and collages. I recreated some copies of family photos by cutting them out. By doing so I was also processing: the aggressive move of cutting made me able to redraw the figures of my ancestors, to make them mine and to transform them into patterns.

The process of “redrawing” found family photos, as a trace of memory, has been exciting for me ever since. I follow the lines, I create lines, I find threads towards the distance of photographs so the images become my own, personalized documents12.

The statement was written in collaboration with art historian Kata Balázs (2020).