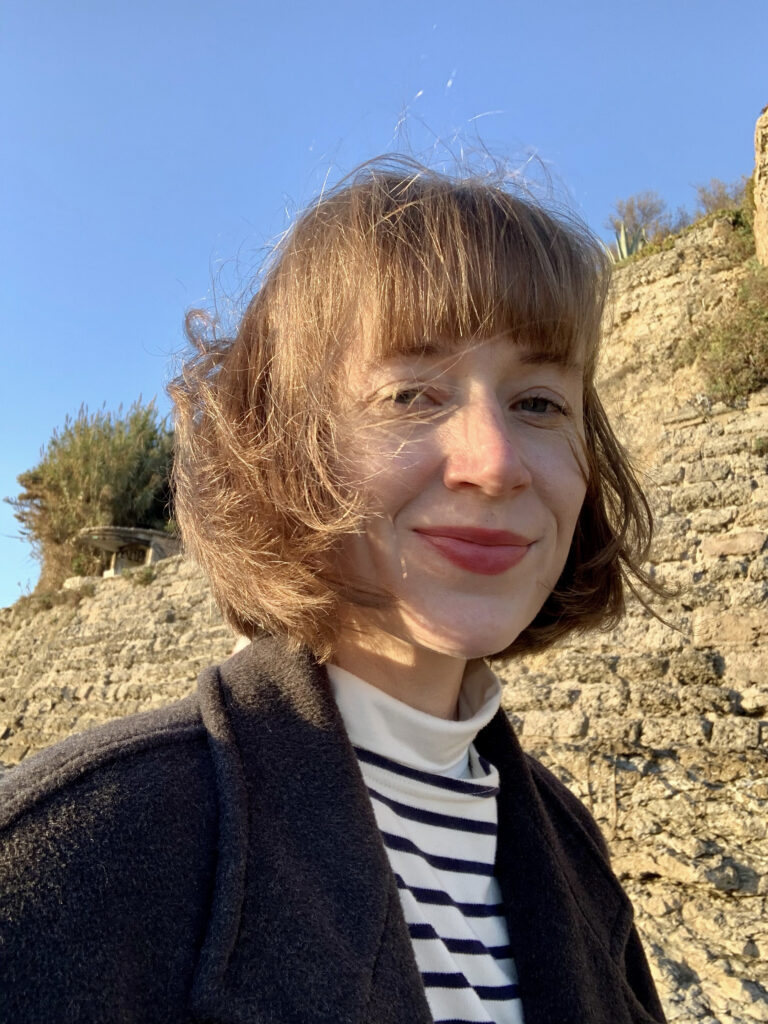 – born in 1982 – is a graduate of the Academy of Fine Arts in Bratislava. She has exhibited in Bratislava, Prague, Berlin, New York, Lisbon and other cities. She has participated in numerous residencies in Europe and New York. In 2011, she was a finalist of the Oskar Čepán Award. The artist is represented by Jiri Svestka Gallery, which published her two original books Skipping School, Learning the Fire of Things (2019) and Soft Boiled (2021). She lives in Bratislava.

For me, art work is a way of relating to the world, of reflecting on it. At the beginning there is always something that sparks my interest – a moment, a story, a found photo – I get excited and I go from there. When I was preparing an exhibition for the The National Museum of Natural History and Science in Lisbon, I decided to work with a site-specific context and I discovered a key moment in the history of the institution – a large fire of 1978. This was followed by a period of few months when I thought about how to talk about this through art. At last, I decided to exhibit objects that have literally lived through a fire – burnt fossils. For forty years, they were stored in the archive, having lost their scientific value. At the same time, the institution did not want to throw them away, because they carried a different – we could say emotional – value. I had brought them back into the exhibition space of a museum. It was a very simple, but in a way radical gesture, which raised questions instead of becoming an answer itself.

My artistic research is built more on the foundation of a childlike curiosity; in contrast to many artists who focus on research, I rarely work in a planned and structured way. Rather, the way I think about it is that things open up before me and I react to them and create a new context for them. When I create, the most important for me is the balancing between the intuitive and the rational/guided. I think quite conceptually, yet at the same time I leave space for the “unnamed”, possibly magical, something that is not entirely in my control. Perhaps we could say: „Let the world speak for itself.” There are themes that have been appearing in my work constantly for a long time. If I were to mention only one, perhaps the most important one, it would be the connecting of the personal/intimate to the large, universal, that what transcends us. And also how it is possible to speak about something much larger precisely through personal stories.

For me, art work is being, it’s a kind of positioning, a way of being present in the world. Attention to objects, stories, relationships. This is something I remember from my childhood and not much has actually changed for me there. In creative work, it is then a question of cultivating this childlike curiosity and deepening the skill to push it further. The work starts when I tell myself this is something I want to share with others through an artwork. Then I think about how to transfer this experience and talk about it so that it transcends the plane of personal fascination. Why should it matter to someone else? There are many things and moments that catch my attention every single day, and not everything I wish or am able to carry into art.

It is interesting and important for me that I am present and work in diverse contexts, that I perceive the differences and thus have a more complex idea of the art world. Sometimes there is much more of what connects us than we think. There was a time when I travelled a lot and lived in different cities. These past years I have had a preference for returning to Lisbon or New York, where I already have a social network, relationships and projects I work on. These two cities are different, but I realised recently that in each of them I can experience a different part of myself, hence our close relationship.

For a long time I avoided calling myself a photographer. Only after about a decade of working in a rather conceptually informed way did I start to approach photography more freely. Visuality and light have always been important to me, and I am no longer ashamed to display “pretty” photos. It it strange to mature into this freedom. I guess it’s only natural that I am drawn towards this medium, as time has always been a big subject for me and my practice has always been about observing and the subsequent “editing” of the seen, which is essentially the principle of photography. Shots from the NASA archive, anonymous photos found at a market, my own iPhone or analogue photos – they are all equal to me. The difference only lies in deciding which ones I will use. Photography is simply like text for me, like writing – I choose what slice of the world to depict.

At first, however, I would consider my texts and my visual works separate. Gradually, I found a way to connect them. In original books and video essays, I find spaces where I am able to explore these connections. The link they offer differs from project to project. I am not able to express everything only through text or only visually, I therefore feel comfortable“straddling” between the two. Eggtuition, the newsletter containing my original texts was born, among other things, from a desire to reach a different audience and to create a new context and options for myself. Writing provides me that, which is very important for me. I started writing in English and so far this remains so; a foreign language offers me distance while simultaneously forcing me to formulate my thoughts very precisely.

I feel very close to the feminism that, for example, Agnès Varda developed in her work and in her life. Her work is about attention towards various stories, about giving space to the people and events that would not be heard otherwise. The question of gender is therefore not something I put an explicit focus on in my work. At some point I realised that I am the first in the line of women in my family to be able to pursue what she chose in her life. And that this is part of a historical, social, feminist context that goes beyond our family. I was raised by a single mother and I am more and more aware of how this environment shaped me. Ever since I was a child, I was used to the the idea of a woman being independent and making her own decisions, it seemed like the most natural thing for me. But I also recognised another aspect of our, or rather my mother’s, situation: that single mothers have it very hard, not only financially but socially, because they are seen as inferior next to “complete” families. My mom and I kind of muddled through, but in hindsight I am grateful for the experience. I remember one summer we made extra money by cleaning the school I attended and she taught at during the school year. My mother is an intellectual but she possesses a deep social awareness and taught me to appreciate the value of work, any work, and not to discriminate between people based on status. This way she gave me some foundation on which I still draw. When I was working on the book DAY for Bratislava City Gallery, and a short essay was born about the act of getting to know a space through the people who take care of it, for example the cleaners, I was not writing about myself, but from a place of my own experience nonetheless, and this authenticity was important to me.

The text was written in collaboration with Miroslava Urbanová (2022).