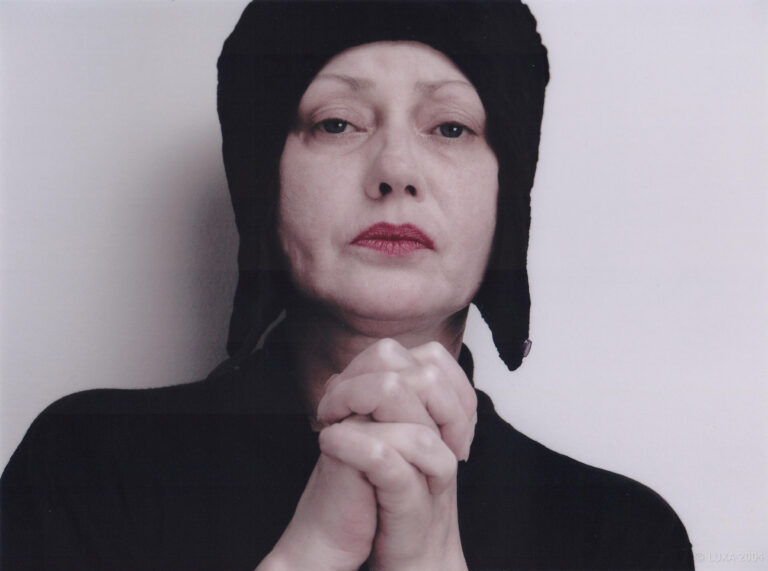 – born in 1954 in the village of Doshchanoe, Arkhangelsk Region (the Russian Federation), died in 2010 in Minsk. In 1973 she finished the Minsk State Art College named after A. Glebov and in 1979 graduated from the Belarusian Theatrical Institute, the Department of Monumental and Applied Art. In 1990, became a member of the Belarusian Union of Artists. For 15 years, she worked as an artist at the Borisov Decorative and Applied Arts Factory. The artist was a member of the artistic groups “Forma” and “Pluralis”. Her works are in the collection of the Belarus National Art Museum, the Zimmerly Art Museum (USA), the municipality of Bonn, as well as private collections in Minsk, Vilnius, Riga, Gdansk, Warsaw, Stockholm, Berlin and Boston.

​Performance After12 was created in 1997 when for about three years Ludmila Rusova had already been working in Minsk. After a long period of living in the village of Efimovo, she sold her house and moved to the city where she purchased a one-room apartment, which became her studio. Ludmila Rusova returned to Minsk after a difficult breakup of personal and creative relations with her husband – artist Igor Kashkurevich, leaving behind many joint campaigns, performances, and conceptual trips. Her colleague and friend, Olga Sazykina recalls, “To such an extent had this resource, this power of negativity – the feeling of being left, abandoned, insulted, and betrayed – stirred her up that she automatically kept on working for another five years, still remaining on this wavelength”3.

The artist invested all her efforts in overcoming the magnetic field of the previous period of work in tandem. And here we can discern typical consequences of gender hierarchies coming into play – those that regard self-actualization, symbolic capital, and shared creative heritage. Moreover, the incurable disease – lupus – started producing impact on her personal and social life and, of course, affected art practices. Nevertheless, Ludmila Rusova was working with an incredible power and intensity and, perhaps, it was she who became a “figure of power” and a reference point in the unofficial artistic environment of Belarus at that time.

The 1990s were characterized by a certain boom of performative practices. Thus, previously individual and disparate, in 1997 the performances grew into Performance Week, organized in “The Sixth Line” Gallery, with the participation of Irina Zelenkova, Oleg Ladisov, Ludmila Rusova, Ilya Svirin, Viktor Petrov, Maxim Tyminko. The event was curated by Irina Bigday and Olga Kopenkina.

In 1999, the First International Festival of Performance “Navinki” was held in Minsk. However, in the local art field, the performance as genre fell under the influence of the hierarchical system of art, which caused, on the one hand, a frivolous attitude towards it, and on the other – the difficulty of perception and interpretation of what was seen. Also, it was hard to distinguish between performances, actionism, and happenings. These practices were (re)invented in perestroika and post-perestroika times with new meanings and content added.

Performances had been present in Ludmila Rusova’s creative biography even before the term itself came into use in the Belarusian artistic community. Starting with trips out of town in her student years and later, in the work Mirror Cross 1⁄2 (Georgia, 1989) and campaigns dedicated to Kazimir Malevich (Suprematist Revival of Kazimir456, 1988 – Vitebsk, 1989 – Minsk, 1990 – Moscow), Ludmila Rusova mastered a new language, its properties and capabilities.

Any artwork, apart from its “own meanings”, provides evidence of time and socio-political context. It (un)consciously reflects the relief and gaps of the local space. The late 1990s in Belarus were a time of apathy and collapse. The country was moving towards conservatism, the range of cultural and political practices was narrowing down due to the increasing interference of state structures. 1996 can be described as a turning point, it was the year of the referendum, which resulted in the extension of presidential powers.

The euphoria of the late 1980s-early 1990s faded away. While in the neighboring countries contemporary art centers were started with the support of the Soros Foundation, in Belarus similar projects remained unrealized.

In the late 1990s, a wave of artistic emigration began. The turn of 1997-1998 became a period when the Minsk Gallery of Contemporary Art “The Sixth Line” (1992-1998) was closed. The work After fully reflected the hopelessness and pessimism associated with the “new era”. The performance was shown at “The Sixth Line”Gallery on November 28, 1997 to mark the end of Inna Kayuta’s exhibition “The Path of Cres” (curated by Olga Kopenkina).

The work After is a gaping, an open wound that exposes the trauma of being and becoming. This is a story of death and rebirth, it is about the sacrifice that we bring to this world, about relationships that devour us, but in which we – with ashes on our heads – give life one more chance. In this work of Rusova’s the unnameable primary fault that makes a person a person, and time – time can be recognized, that something which can neither be articulated nor figuratively described. This is certainly not a direct retelling of everyday events or a personal biography, but an attempt to capture Dasein.

Ludmila Rusova relied on the community formed around “The Sixth Line” Gallery, on the young generation of artists. In 1995, curator Olga Kopenkina wrote that the gallery “worked as an independent non-profit organization implementing a program to bring together innovative initiatives to create a Center for Contemporary Art”7.

This movement had every chance to transform the cultural situation in Minsk. However, history decided otherwise. The new generation began to leave the country, “The Sixth Line” Gallery was closed, and the cultural space literally got curtailed.

Thus, while performing After and visualizing the history of the iconic gallery whose days were numbered, Ludmila Rusova marked the “end of a beautiful era.”

After Ludmila Rusova’s performance, “The Sixth Line” worked for another 8 months and finally ceased to exist in July 1998, after the exhibition “Five from the Academy”, organized by the Polish Institute in Minsk (V. Luchay, P. Novak, R. Lugovskiy and others) and curated by E. Domanovskaya. It was closed for a formal reason: the space rented by CJSC “Beltechnologiya and M” failed to receive the official status as a non-profit structure.

Ludmila Rusova always worked hard and much. Her every gesture in public space was well-measured and precise. Each action shook up the local community, and, as the artist put it herself, did it “hot and strong”. However, it cost immense efforts. By the end of the 1990s, the consequences of an incurable disease had become more noticeable. The nature of Rusova’s performative practices changed with the artist’s biography (private eventfulness, bodily unsteadiness, and unreliability) starting to play an increasingly important role.

A special attention should be given to Ludmila Rusova’s documentation practices. The artist supplemented her performances with texts and metaphysical poetry, which expanded the field of interpretation and provided the viewer with receptive clues. These are by no means explanations, but rather traces left for us to follow. The pulsation, the artistic rhythm of her works, sometimes gets uneven, turning into a tremulant line.

Ludmila Rusova, defining herself as a post-structuralist, in her artworks still leans towards metaphysics, with its belief in the eternal truths. The figures and forms of her works hardly look like an “empty sign”, on the contrary, any action seems to be associated with an otherworldly referent. Performances form a separate semiotic world created through bodily affects and signals of biography. Life, death, and art that appear in the author’s text that accompanies the performance After are concepts that invariably describe her artistic practice:

…there is life and death,

and there is art

life is not art

there is no art in life

no living is art, art is better than life,

life is only part of art, death is not art either, death is part of life…

…there is the life of death,

and there is the death of life,

there is no death of art

is the art of living

dying, living the life of life, living through the death of death, there is life of the art of living,

to live both life and death… for the sake of art…

Tanya Setsko – researcher at the Center for Gender Studies (EHU), co-organizer of the feminist Gender Library,  member of MAKEOUT, curator and cultural activist.