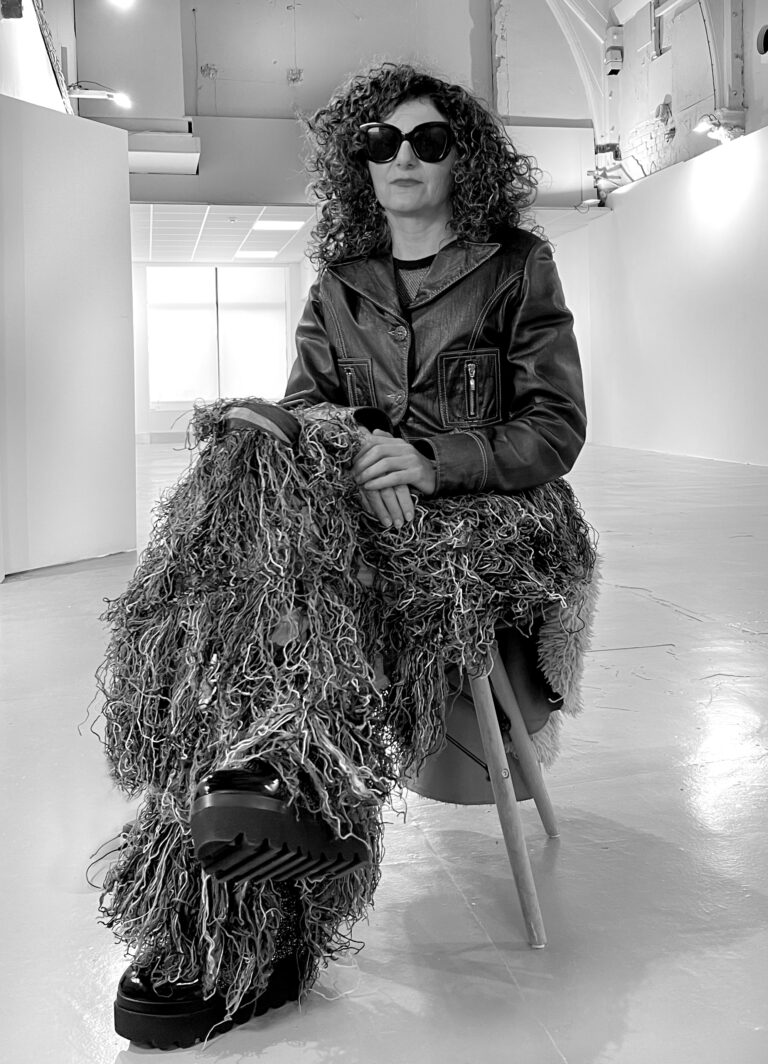 — born in Sarajevo in 1966 to an Albanian father and English mother. She moved to England at an early age and did not return to the Balkans until after graduating from Goldsmiths University in 1988. Her work was first shown that year in Damien Hirst’s landmark exhibition “Freeze” in London and she went on to exhibit regularly in the UK, USA, China, and throughout Europe. She represented Albania in the 48th Venice Biennale of 1999 and in 2017 took part in documenta 14 in Athens and Kassel. One of her most recent group exhibitions was the needle, the haystack, the thread, curated by Monika Szewczyk at The Arts Club of Chicago. She recently exhibited in Phair, May 2022 with the Peola Contemporary Art Gallery in Torino, Italy. She is an artist and Professor of Art and Photography at De Montfort University, Leicester, UK.

When I was a child I was uprooted from one culture to another. Not knowing the local language at this early age I discovered that the language of art was universal. I discovered at age of four I could draw and people could understand me. And people noticed my talent. I was obsessed with horses as a child, first seeing them pulling carts in Sarajevo then pretending to be a horse and riding horses growing up. At six years old I painted a horse, the painting was titled Horse1 which was sold at an art fair to raise money for the school. That painting is still owned and valued by the buyer who has framed the picture and hangs it in their family home.

As I was always good at art in school it was a natural progression to then study art. I first studied an art foundation course that gave me the chance to explore all art disciplines, such as design, fashion, and sculpture before selecting painting. I would sketch my ideas as paintings quickly like Claude Monet and the impressionist painters. However, after several visits to Kosovo, I found photographing a quicker method for capturing ideas, and I would return to the studio and then paint from the photographs I had taken and ‘make art’ from them. During my student days, a tutor Ian Jeffrey, the renowned art writer, and critic, head of Art History at Goldsmiths College2, suggested I should exhibit the photographs on their own. This was a pivotal moment for me as I realized the photographs were strong enough on their own without having to paint from them.

After graduating in London in 1988 I went to live in Kosovo to connect with the land of my father and his family where I also began to learn the Albanian language. It is here I began the haystack project3 which linked in with my early obsession with horses as it was based on horse feed. I found art in the landscape as I felt the haystacks were like land sculptures. It felt like my homeland and my artistic background were united in these land sculptures that were made by the farmer and sometimes the animals that fed from them.

I was obsessed with haystacks at the time and a friend Violeta Bardhi from the Drenica region invited me to go to witness one of the first large Reconciliation of Blood Feuds Campaign gatherings. I was so moved at that moment, it felt like I was taking part in a  monumental and historic event. From that day, I followed all the other mass reconciliations and then became involved with the grassroots team. We visited the feuding families to encourage them to ‘forgive the blood’ and end the feud.

These few years were very turbulent political times in Kosovo and in 1990 I had the opportunity to follow and work with the Blood Feud Reconciliation Movement4 and its figurehead Anton Çetta. This historical moment shaped my life as it was an extraordinary and emotionally moving campaign and inspired me throughout my life. In 1991 after many visits to London, I made a documentary film with the BBC called, Forgiving the Blood. This was shown recently in 2019 in Dokufest and some of the participants were in the audience.

Today, I work mainly with photography, drawing, performance, and film. I have taught art to students for over 30 years and, now as a professor, this is an important part of my artistic practice. I am fascinated by the art school environment and the reciprocal tutor-student relationship.

My cultural identity is a curious one. My parents divorced when I was four years old in Sarajevo and I went to live in England with my English mother. My father went to Kosovo and lived there all his life. He married again and I have four sisters who also helped me to connect more to Kosova. We speak to one another in the Albanian language. So I had each parent at home in their own homeland rather than having parents that were new to a culture respectively. My mother later emigrated to Zimbabwe and married there. This not only gives me a strong identity but somehow an equal belonging and outsider feeling to both cultures. I have drawn from this as inspiration in many of my works.

Shifting Borders is a series of work that I made in 2006 – 2008, where I originally placed myself in Albanian costumes in locations around Kosovo, Albania, England and Zimbabwe, and then I used models in various Albania costumes from different regions. Sometimes I even photographed myself placing the costumed people as ways of examining identity visually. I decided to compose the works with a small figure reacting to real situations in the landscape. I chose to do this in black and white to use the pictorial language of historic photography.

The two works to the right of the picture are from my Shifting Borders5 series showing a figure in Albanian costume one is in Kosovo6 the other taken in Zimbabwe7. Although the curator of this exhibition put this together at random the two pictures seem to represent my mother and my father. The Zimbabwe mother has round, earth-like images whereas my father’s Kosovo picture is square and angled (my father was an architect in Kosovo) somehow subconsciously I have pointed to this and it was this exhibition that highlighted this. This ongoing process of exhibiting and re-evaluating my work is also my process.

My work is highly instinctive and I do not think things through in my process. I react to things emotionally by drawing and taking pictures without thinking. Just like I captured the farmers’8 as they walked over the hill and instinctively took this picture. Usually, people hide their contradictions, while I like to show mine in my work. This approach is visible in the work I have produced over the past three decades. I want to unify all the elements of myself in my artwork. It is like a jigsaw puzzle for the viewers to unravel.

In my work, I have been representing women either washing in Hamam Turkish Baths or bodies de-formed by water9. I have many different bodies of work and I sometimes work on them in tandem. Often adding work to various existing series. The series, Personality Explored10 started back in 1986. It is a theme I keep returning to using the nude female form as a starting point.  It is what connects my work, the bodies of women in the Hamam to the women in Has Kosova11 to the Women in Water. I guess I am the thing that connects them. They moved me and I wanted to capture them and make art about them. Much of my work is ongoing and there are series and themes that run as far back as 1986 during my time as a student to the present day.

In my everyday life I am a mother, artist and professor at a university. As many people, I juggle trying to keep all the things going. Being an artist is difficult as usually the time gets spent on more demanding aspects of my life and so I have to be disciplined and committed to going into my studio and creating art. I identify as non-binary as I have many male and female aspects. I brought up my child on my own and took on the role of the father and mother. Lala is actually a male name in Albanian; it means ‘best man.’ The best man who collects the bride at a wedding, “O po vjen goca moj Lala, (Oh the lass is coming Lala)” as the Kosovo folk song goes…