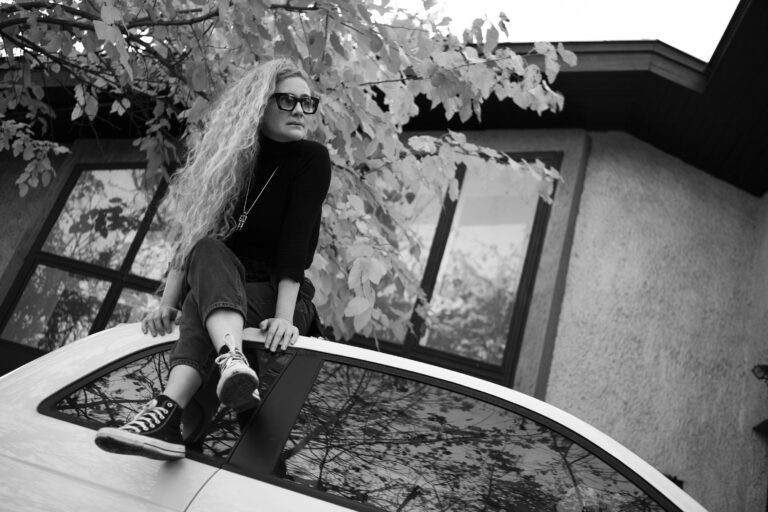 – born 1972 – is a contemporary painter and intermedia artist, underground singer and frontwoman of the band Tereskova. In addition to painting, she works in a variety of mediums and in the performance genre. In her practice, she blends elements of popular culture and advertising in a provocative way, elaborating on topics such as the contradictions of the elitist conception of art, the saleability of art, or gender inequalities. Her work has been exhibited at the Ernst Museum, the Kunsthalle Budapest (Műcsarnok) and the Ludwig Museum Budapest, among others.

Portrait of the artist by Évi Fábián

Commercial galleries appeared in Hungary when I graduated. Before that, official art scene was defined on a state-regulated, political basis. In contrast, there was a group of artists who could not exhibit officially, or at very rare occasions. My masters were Tamás Szentjóby and Dóra Maurer, who began to work in an era when art was defined by strike, desire for freedom and separation. They wanted to part from official, politically controlled art, so it is by turning inwards completely and almost shutting out the outside world that they worked and exhibited, sometimes despite prohibitions. After the country’s political system changed, art could open up to the public. I was interested about what happens when art doesn’t show resistance, but lives with its freedom and does what our teachers never did: it makes money out of itself, and just like anyone on the market who wants to sell something, advertises the product. And what does it advertise itself with? With a female body that is preferably uncovered.

I was in my late twenties when I made my work entitled I Am a Contemporary Painter1, in which I posed in the style of lingerie advertisements on a billboard in Lövölde Square in Budapest. The problems I have outlined in this work still define my art. I realized it because I wanted to draw attention to contemporary art, I wanted to communicate that we exist. I also wanted to point out the prejudices that surround artists and make it impossible for us to assert ourselves. According to public opinion, artists must live poorly and look bad, they must be miserable. Although this is a project made twenty years ago, I still did not reach the living standards I want to have because there is still no real contemporary art market in Hungary, and it is still considered a sin if an artist wants to work for money.

Several of my works deal with how to make contemporary art known. I think the artist has to be a star, just like a pop star. My goal is that people line up not only for the exhibition of a dead artist, say Van Gogh, but also for the exhibition of living, contemporary artists. If I was not born in Hungary, I would not have realized many of my works, because elsewhere fine arts and collecting art are parts of the culture.

I wanted to be a singer since I was a little girl. In the eighties, several artists played music, my role models were the Bizottság band and Marietta Méhes. They also inspired me to form a band, although I never learned to play music, nor did my role models. Shamefully I didn’t put any energy into running my band, I never called anyone so we could have a concert, we never had a manager, and when we went to the countryside, I got a nervous breakdown there because the conditions weren’t good. People, on the other hand, liked it, and the fact that I was Tereskova as well probably added a lot to my reputation. In the debuting commercial TV channels, and as a graduate painter who was also a crazy singer, I was unique. I was later able to use these experiences to make myself known as an artist as well.

With my exhibitions, my goal has always been to let a lot of people know that I’m causing an uproar so that one day an exhibition opening can become a real social event, not just a professional one. Unfortunately, art circles are still very closed, and I’m working on changing that.

When I first applied to university, the head of the council told my parents that no demons would be admitted to this school. For the fourth try, I went in dirty pants, ugly glasses and a ragged t-shirt, I didn’t put on makeup, I put my hair together in a bun. Without even opening my portfolio, I was admitted to university. I could only get into the artistic circles by disguising myself as a man, or at least as an ugly girl. This is an absolutely feminist issue. In the early 1990s nevertheless, I thought, together with many feminists that feminism is a thing of the past. It turned out we weren’t right.

In both my professional and private life, I had the disadvantage of being a successful and especially good-looking woman at the same time. That is why feminism has become important in my art as well. I am not informed about the subject of feminism, I am not interested in anything in the world except myself, yet I am always in the middle of things. Before, I hated when my work was labelled as female art, and I found it ridiculous that art is defined by whether it was done by a woman or a man. In 2015, I got tired from one minute to the next, that’s when I became a feminist artist: I completed a series of 32 images called Writing on the Body234 that wouldn’t have been made if yet another man hadn’t left me because I didn’t think the way they thought I should.

The man who made me realize this work left me because he thought my life is complicated. As a man, he can’t help his partner, he can’t be the backbone of a strong woman who wants to get a bowl of soup on the table when she’s hungry.

It is not because I’m a feminist that I don’t cook. I just don’t feel like it. I want to stand in front of the canvas and paint instead. In the current situation, I have to work to be able to pay a cleaning lady and a housekeeper. Men forced these occupations onto women, they would not complete these task and would not be able to endure the shame if anybody found out what kind of lowly work they were doing at home.

I am constantly politicizing my art, but not the way it is done in the parliament.

I have a work where I defecate4 next to the revolution-torn parliament because I think I can do this better than the members of the parliament. After all, the fact that I rewrote Péter Geszti’s song entitled Hungary is also politics. For doing so, I was called in by the then government to the Prime Minister’s Office to discuss this with me. Or when I organized my own funeral and declared that I would no longer paint if in Hungary, artists are despoiled by businessmen in the name of patronage, that was politics as well. And of course, when I covered all the walls of the gallery with portraits of Viktor Orbán, indicating how politics crawled everywhere, into our private lives, that was politics too. Unfortunately, politics has infiltrated so much into the lives of all of us that many have been persecuted because of their supposed political position.

Since then, I don’t want to expose myself to the political struggles of insane, emotionally overheated people. I was right when I was five, when I decided not to deal with politics because they would take me to the gulag.

The statement was realized in collaboration with curator Andrea Soós (2021).