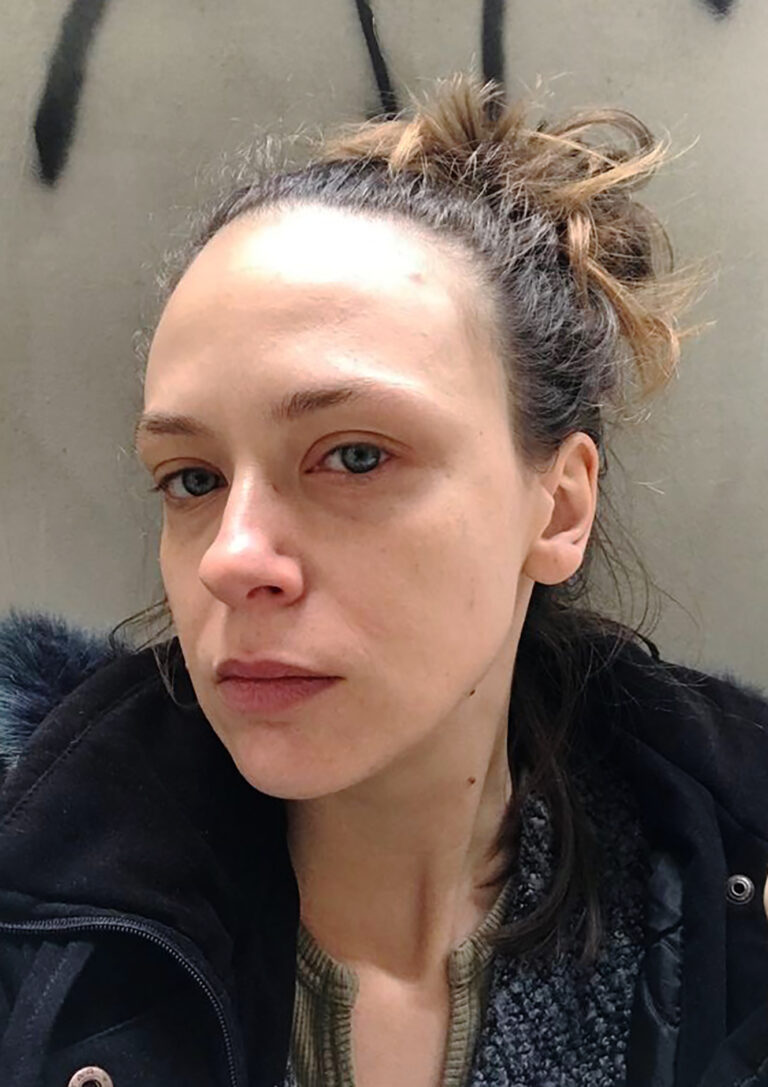 I’m Jelena Mijić, although I always find it strange when I hear my full name, because I am usually called Jela. I grew up in the village of Bukovac near Novi Sad, I am the oldest of three sisters. It was only when I started high school for design in Novi Sad that I became aware of class differences. I studied painting at the Faculty of Fine Arts in Belgrade, where I currently live and work as a gallerist, producer and cultural manager, waitress and bartender, sometimes as a photographer, and occasionally I run creative workshops for children. For several years, I was also the host of the radio show Sceniranje (Staging), which is devoted to the local art scene and cultural policies. Since 2013, every couple of years, I have been a part of the team that organises the MultiMadeira artist residencies on the Portuguese island of Madeira. In my free time I take dance lessons. I have also performed as a dancer and musician and held performances. In the context of visual art, I create and exhibit only when a good opportunity arises, i.e. when I am invited to participate in something that offers an interesting contextual or spatial-production framework, and for the reason that I do not have the means (in a spatial-time-financial sense) to create for the sake of creation, nor the will to spend time applying for exposure for the sake of exposure i.e. building up my CV. In the near future I plan to move back to my village and do more or less everything I mentioned earlier. Most of all, I would like to be an artist and a housewife.

I don’t differentiate between private and professional, I live it all together. I prefer to act in a collective1 or in collaboration with someone rather than alone. I also like to involve other people, not necessarily artists, in my work2. My view of myself as an artist varies and I find it difficult to fit comfortably into existing categories. I see art as a vocation rather than a profession. I believe that the art system is deeply corrupted, but at the same time I have the need and feel the responsibility to participate in it, so I problematize it through my own work, simultaneously establishing an ironic distance from myself. I have a problem with imposed authorities, as well as the increasingly noticeable tendency to reduce art to mere trade and commodity.

Subjects that interested me even as a student of painting are the authority of the artist’s personality, the questioning of the classical principles on which the work of art is based, as well as issues of control and giving in, randomness, and the demystification of the creative process and artistic system. On that trail, I created the first work I consider having an author’s stamp, a series of paintings called “Art Must be Beautiful, Colourful and Handmade”3, which led me further into “Lottery-Paintings”456789, which are based on the principles of aleatoricism, and are created with the participation of the audience. Very often when I create, I build on my previous works or procedures. I don’t do much, I simmer ideas for a long time, until they thicken nicely, and then I wait for a good excuse to carry them out. Or I happen to be provoked by the context. Then I make a new work that is a response to the situation, but methodologically it keeps continuity with previous works. Sometimes I even exhibit old work, but with some new element, which enables a new reading. In terms of production, I am guided by two motives: simple and cheap.

In 2017, I spent two months in New York as part of a residency program organised by Residency Unlimited, as a winner of the “Dimitrije Bašičević Mangelos” Award, which is given to young visual artists. In the works created after that, I mainly deal with understanding the relationship between the text and the artwork, between the positions of the curator and the artist, as well as the role and influence of the market in the world of art. From that moment on, the text itself, that is, the way the work is spoken of, becomes a very important part and key to understanding the work itself. The work “Reinstatement”10, created in 2018 purposely for the 57th October Salon, explicitly considers these relationships. In the following work “The Great Painting Exhibition With a Bunch of Paintings or How New York Brought Me Back to Painting”11121314 (probably the most complex work I have done so far) a very important ingredient is the text by Branislav Dimitrijević15, an art historian and curator of authority who agreed to play the game, that is, to write an overpraising text about a conceptually almost banal work. The initial idea was to literally respond to two important postulates woven into the very identity of the award: the transfer of experience from the centre to the periphery; the expectation to perform (demonstrate) something extraordinary upon return – in the form of a solo exhibition.

In the last work “Jela’s business”16 created in 2021 for the purposes of the exhibition at the Street Gallery in Belgrade, the text explaining the exhibition and which was placed to be seen before all the works, and which I wrote, was an integral part of the entire work although I don’t think it has any literary value. In it, the process of creation of the work is recounted almost in detail, as are the conditions of work and everyday life. It is in this gesture that my most important views are expressed. Art is not more important than other activities and it must be for everyone. Art is not separated from the private, nor from the social. Artists must not mystify, nor create a false image of what it looks like to practice art. Being just an artist is impossible. One must entertain.

The text was written in collaboration with Mirjana Dragosavljević (2022).