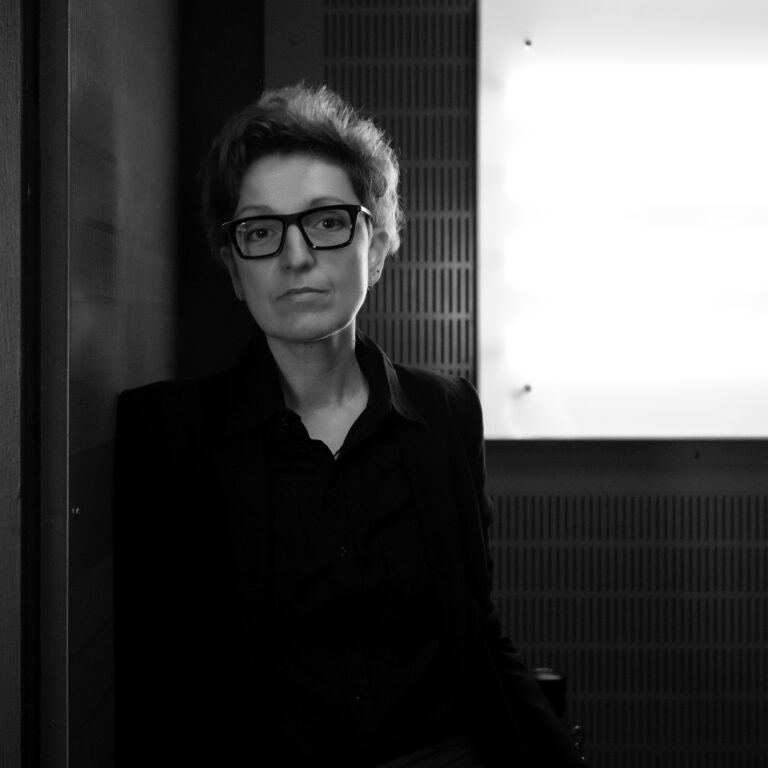 – (1974) is a visual artist and filmmaker, born and raised in Yugoslavia who lives and works in Belgium. In her films, photography and video installations, Jureša explores issues of cultural identity, gender, the politics of remembering and forgetting and collective violence. She graduated from the Academy of Arts in Novi Sad and holds a Ph.D. from Ghent University, Faculty of Arts and Philosophy and KASK & Conservatorium in Ghent.

Portrait of the artist: Bea Borgers for Kunstenfestivaldesarts, 2022.

The truth is, I work within the realm of reality though I am not interested in a mere documentary. I work with people and deal with real events, memories, history and their critical interpretation, all the while thinking about how to talk about crime and trauma and how to introduce them into the artistic space. I read somewhere that an anecdote can indicate the presence of a blind spot and therefore I treat this scrap of historical margin as a guide. It seems to me that this inherent ambiguity – that the anecdote refracts within itself has become, over time, the essence of my creative process.

Doing art was almost not a choice but my centre of everything. When I look back, it is clear to me that, through the creative process, I persistently searched for a meaningful voice, examining the space beneath the surface of the known. Samuel Beckett writes that he does not want to reproduce reality but to discover what lurks behind language itself by boring “one hole after another”1. One can almost communicate what at first seems unfathomable, if you penetrate reality by zooming into the details and intimacy of your wound. An attempt to heal in advance will be unsuccessful if that is the primary task but the creative and investigative processes give things meaning.

I get the impression that time passes linearly for many, but that my generation lives a parallel reality, the one locked in the loop of the 1990s and the consequences left by the wars. Through the prism of that experience, both my observation of history and the experience of the present are refracted. The 1990s also brought an identity crisis, the memory of Yugoslavia in the newly created states was savagely revised, trivialising the Yugoslav anti-fascist past, its uniqueness and complexity. During the breakup of Yugoslavia, the roles of poets and murderers suddenly overlapped, making our basic concepts of understanding the world painfully wobbly. I grew up in Yugoslavia and after its collapse I continued to live in Serbia, where I witnessed the change of values through historical revisions and the rise of patriarchy, religion, right-wing beliefs, nationalisms, which, with the denial of crimes, as an official state policy, gave birth to twisted offshoots of neoliberal capitalism. That is an ongoing process throughout the entire Yugoslav territory but it is most difficult to bear when you live where you are expected to belong until you realise that, like many others before you, you cannot belong there.

One of the main issues that preoccupy me in relation to crime is the life that continues to exist even after the Neighbour has been taken away. Equally, complicity, as well as the stretching of the line between the perpetrator of the crime and the silent majority, are increasingly in my focus. After I moved to Belgium, I started to focus on and analyse the mechanisms of the politics of memory in a wider European context, which expanded my research and led to the conceptual beginning of APHASIA2345. This feature-length film essay traces the genesis of collective crimes, linking them to the creation of nation – states and national identities. In three chapters, APHASIA reveals threads of positions of power, racism, injustice and violence from Belgian colonialism, through Austrian antisemitism to atrocities in Bosnia during the Yugoslav wars. My intention was not necessarily to connect the events in a documentary fashion but to make a kind of documentary gesture through the tapestry of relationships; the rhythmic sheet of this cognitive failure that rests on the denial of the crime6. And there is also the question of complicity, the question of positioning oneself within this structure— not only my involvement as an artist dealing with this topic— but also the complicity of media, film and photography; their complicity in historical crimes, which evolved from the mechanical tools for recording reality into an agent of tracking and coding7.

During the research for the work Mira, Study for a Portrait89, I faced my own ghosts and my memory of Yugoslavia and the question of whether the Yugoslav experience was actually lived or was it a construction1011. Is it possible to live a life outside of pre-set identity determinants and the burden of past sufferings, is trauma transmitted to future generations, was it possible to establish a country freed from war traumas and the wider geopolitical context, and what does it mean to be a woman throughout whose existence this reality is refracted?12 Initially, we can reflect upon a biography of a woman and a country and the chronicle of an era13. However, this is an illusion, because the geography of time in the work is very specific. Although photography and video frames refer to places to which the viewer returns again and again while following the video installation, their meaning is supplemented with new events (and histories). That fragility of the moment and the vulnerability of a place whose innocence cannot survive, led me to create a framework through which I can question my own sense of loss. A look back into the Yugoslav experience and the consequences of the war can also be read in the multimedia work STILL1516. The Sarajevo Children’s Choir—present exclusively through a sound installation—was created during the war in the then shelled city under siege. The photograph showing an empty room where the choir rehearses represents the present moment, as it is, in a building whose meaning creates a series of multi-level connections – with the repertoire of songs performed by the choir among others. Both of these elements collide with the moving image of the post-Dayton landscape, with the very questions of where is it that the war ends and what its consequences are and whether events can truly be understood through a linear reading of time, putting the past, present and future into brackets.

I am preoccupied with not belonging and personal destinies determined by the established social concepts or imposed political circumstances. On the one hand, it can be a question of female identity and the experience of being a woman, as in Notes on PMS17, where premenstrual syndrome is used as a framework through which the portrayed women express their fears and insecurities, which are patently socially conditioned. On the other hand, it can be an encounter with the Mozarts1819, polyglots from Southeast Europe who sell tickets for Mozart’s operas and concerts on the streets of Vienna, dressed in baroque costumes and whom the observer unequivocally recognizes as a signifier of Austrian identity. The destinies of the wandering Mozarts and their social non – belonging were largely determined by the fact that they were born in a region far enough from the privileged Europe20.

Five years after I filmed Mozart, I found myself in a situation where my previous life and professional experience became invisible. It’s not unusual, that’s just how it is, the life that happens in the territory that the Western gaze does not reach is not registered as (equally) important or else it is taxonomized into categories that do not tolerate complexity. Being a foreigner broadened my interest in the violence of everyday life and the pitfalls of silent racism and patriarchy. For someone interested in historical crime and its denial, moving to Belgium meant being at the source. This dual position, the experience of being the one who observes and the one who has become the object of observation—and the knowledge that every collective crime is conceived in language—I recast into a film poem called UBUNDU.212223.

The text was written in collaboration with Dejan Vasić (2022).​​