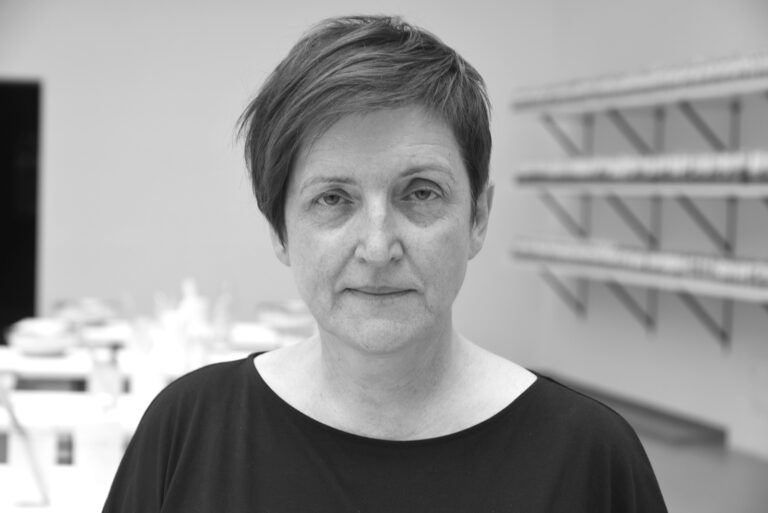 – born in 1963. An artist, professor, organizer, and curator based in Slovakia. Subject of her work is a search for the balance between personal experience of growing up in the country marked by plenty of political turmoil and the universal history of the Eastern Bloc countries during the transition period from 1990 until now. As a professor she led the Studio IN and The International education program Open Studio at the Department of Intermedia at the Academy of Fine Arts and Design in Bratislava between 2004-2019. She exhibited widely both locally and internationally. Her solo project Eastern Sugar was presented at Kunsthalle Bratislava in 2018. Her solo shows were organized among others in Bratislava, Prague, Budapest, Vienna, Helsinki, Rome. She represented Slovakia (together with J. Surůvka) at the 49th Venice Biennale in 2001. She cocurated the exhibition series Private Nationalism in 6 countries (2014-2015); Universal Hospitality 1., 2016, Vienna, Austria and Prague, Czech Republic, 2017. Currently working on the international exhibition and research project Eastern Sugar supported by Creative Europe program.

Portrait of the artist by Rosta Jozsef.

To me, art means communication, opening a dialogue. A person is not just a spectator, but a conversation partner. My aim is to change her/his way of thinking. I wonder how to create a context in which I allow a person experiencing a different quality. Not all things can be described rationally and for this reason an art is a better language. It brings a total, multi-layered experience. Intermedia art works with the whole body, its works are using movement, time and touch and it is therefore more difficult to ignore them. A good example is the installation of the Pillow1 from the Floor cycle (1996-), where people had to go through the installation if they wanted to continue with the exhibition. The trampling of the installed pillows also reminded of the constant devaluation of women’s work.

Through art, I can submerge deeper into myself. I am watching what is happening in the world around me and letting it pervade me. I think that artists have a feeling for what is happening in the world – they can name current phenomena or bring contemporary commentary for universally valid existential experiences, for the human essence. We are a little bit like a chronicler; we diagnose and report on the society. At its best, art has implications for the future.

It is natural for me to engage myself, also out of consideration for my family history, especially for the male characters of my grandfather, father, uncle. As a student, I have been active in the unofficial scene, for example, together with Jozef Rokek Juhász and other friends, we founded the Studio erté, platform for performative and experimental art. During the Gentle (Velvet) Revolution and for the next year, I worked for the Hungarian Independent Initiative and the newly formed newspaper Nap (the first independent Hungarian newspaper), but I understood that I needed to set the line. I didn´t want to sacrifice my whole life for it, and I wanted to be here for my family and my art. Sometimes you can do more with your artwork than if you were still protesting on the street.

I try not just to illustrate the idea and not to comment on specific political things. I think that activism is mainly about simple black-and-white communication, it expresses that we are standing for something and rejecting something else. On the contrary, art brings more readings, layers, and complexity of content. I feel an urge to comment on social issues, but I also need a distance from my work, so I cannot react quickly. If necessary, I would rather shout in the square. Sometimes, however, art and activism can be very well connected – for example, the work Clouds2 (2017 Košice, 2018, Bratislava), which I created with Jaro Varga and Marian Ravasz for the White Night (Biela Noc), was to be installed during the protests For Decent Slovakia (Za slušné Slovensko). In the end, the installation was not technically possible, but the message works in both cases.

I think that my art program represents various permanent themes that return cyclically. I´d return to those that interest me repeatedly. Sometimes I understand only later which things belong together. In the 90’s, I was more tied to the material and its informative value. I have already abandoned this approach, I mainly use readymade, or rather readymade looking objects. I do not produce the vast majority myself, so I miss the direct creation of the work. Working in this way, when my vision is materialized by other people, requires a high concentration and organization. I see intermedia as the most natural language to describe what I want. Sometimes I discover the link during the process, other times I have it clearly defined from the beginning. This was also the case with Eastern Sugar3 (2018), in which I wanted to refer to privatization, values, work and memory through the story of sugar factory in Dunajská Streda. Formerly I would be interested in sugar as a crystal, today the story of the sugar factory represents a metaphor for an economic problem.

In the 90’s I worked mainly with my own experiences. At first, I probably did not understand what feminism is all about. Today, I cannot call myself anything other than a feminist, as I perceive it as a fight for equal opportunities. I consciously started working with this idea after Katarína Rusnáková invited me to participate in the exhibition Paradigm Woman (1996). This exhibition opened an area of ​​women’s themes and new works for me. I think that the absence of women at different levels of social life – in political representation as well as in the arts – needs to be remedied. And we haven´t gotten over it yet – in academic environment or politics today, women are accepted, but still only with reservations. I dealt with this topic in the work Zsófia Meller4 (2012), which was based on an interview with the philosopher Agnes Heller about her family history. Ágnes Heller’s grandmother, Zsófia Meller, was the first woman to study at the University of Vienna at the end of the 19th century and she had to sit behind the folding screen to not to disturb men during classes.

In reconciling work and creative life, I was lucky enough to have support in the family. At the same time, my inner need to make art was so strong that I was determined not to give up. If artistic self-realization is your need, it is difficult to limit it, for example, due to motherhood. Without work you lose your essence. Reconciling these needs is a shared responsibility of the woman, the whole family and society in general. However, even in this matter we are still catching up with the West – women artists in our region had a different starting line than the women artist in the West. We have been affected by a deficit in education and by artificial equality of opportunities. That is why in my works such as Eastern Sugar I am interested in the research of the decolonization process.

The text was written in collaboration with Michaela Kučová (2020).