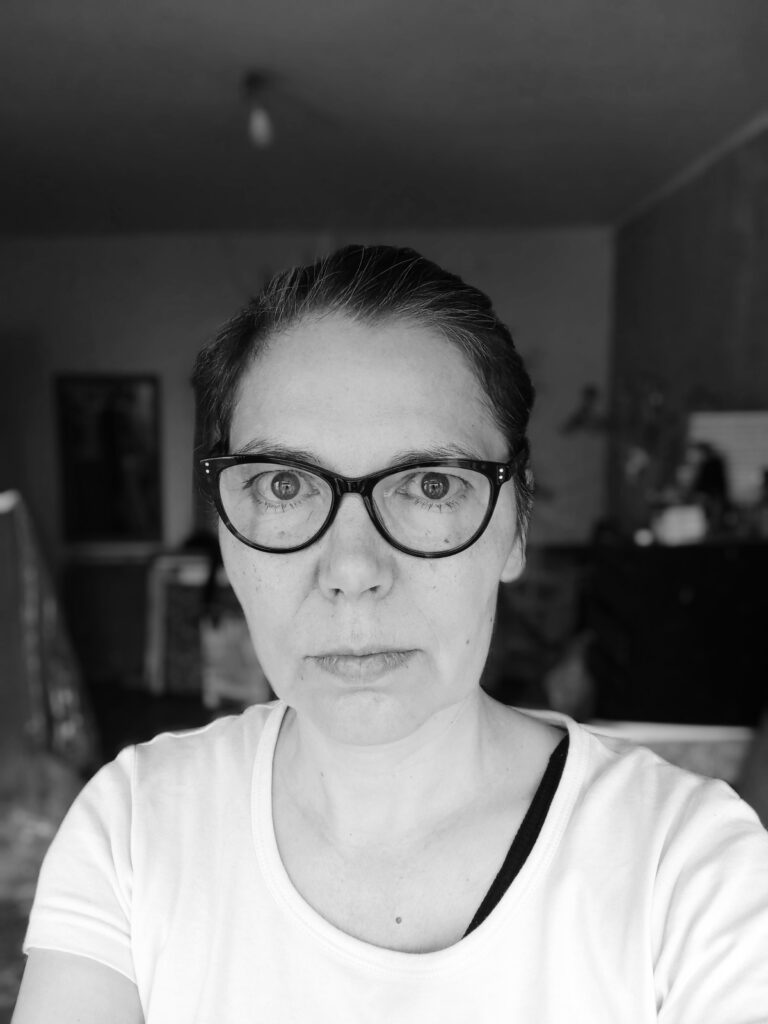 – born on the 15th of April 1966 in the city of Ostrava, where she grew up in a housing estate in the Poruba district. She has loved drawing ever since she was a child. She attended a vocational secondary school in Frýdek-Místek, from which she graduated as a trained arranger. She worked as a window dresser in a grocery store in the centre of Ostrava but after some time she became a librarian. In the second half of the 1980s, she began exhibiting her drawings and prints at unofficial exhibitions. Hana Puchová was an active member of the circle of artists that gathered around the painter Jiří Surůvka and the collective named Přirození [the Natural Ones/Naturalness], which also included artists such as Daniel Balabán, Pavel Šmíd or Petr Pastrňák. After the fall of the Communist regime, she got accepted to the Academy of Arts, Architecture, and Design in Prague. She studied in the Illustration and Graphics Studio of professor Jiří Šalamoun. After she graduated from the academy, she joined the Přemysl Pitter Church School for Roma children in Ostrava-Přívoz where she worked as a teacher. She has participated in dozens of group exhibitions, and since 1996 she has been also having solo exhibitions. Still-life paintings and portraiture of her friends became her main domain as she is now recognised as one of the most prominent painters of her generation from Ostrava.

It is said that I enjoyed drawing already during my early childhood. The family that I grew up in was not artistic. However, my mother graduated from an art high school. She worked as a shoe arranger at a Baťa store her whole life and she supported my artistic inclinations and interests.

The idea of being an artist was something exotic and exclusive for me.

The first living painter I met was Karel Žaluda, who was a teacher at the Folk Art School in Ostrava-Poruba. He and my mother somehow knew each other, and one of his self-portraits still happens to hang in her living room. Looking back I see that certain proclivities of mine had already manifested then and they still have a hold on me. Just as the lack of ability to follow certain work methods and procedures or to keep things in order while working do.

I remember a teacher threatening me that she would show my carelessly maintained workbook to another teacher from the Folk Art School so he would know what I am like. I don’t even remember what subject it was.

I also remember that I used to draw my classmates, predicting what they would look like as adults.

I suppose that this attempt of connecting and communicating with others already appeared during my childhood and it has prevailed in my practice as something crucial. I didn’t even properly consider that I could apply to an art high school. The truth is that I didn’t even really know where they were. Following my mother’s example, I enrolled to a vocational secondary school in Frýdek-Místek with a focus on arranging. I did not have any particular expectations but I was glad that various art-related courses were a part of the curriculum. Drawing was being taught by Jaroslav Homolka, who had quite an unusual personality but thanks to his support I contemplated the possibility of further studies of art. However, in socialist Czechoslovakia, this path was not realistic.

Around the same time, at the end of the 1980s, I met Jiří Surůvka and others who later founded the collective Přirození [the Natural Ones/Naturalness]. We were trying to organise alternative exhibitions anywhere where it was possible but what was the most important is that we were together.

During that time, I made a living as an arranger but later I also worked as a librarian. Before my studies in Prague, I even briefly worked as the kitchen help in a hut in the mountains.

Following the example of many friends, after the Velvet Revolution of 1989, I decided to continue my studies — and I got accepted to the Academy of Arts, Architecture, and Design in Prague, to the Studio of Illustration and Graphics, which had been recently given to professor Jiří Šalamoun. He supervised the studio in a manner that helped me feel free in my creative practice and I am still very grateful for this approach. He had the capacity of knowing what was particular in each of us and he would point out if we were lying to ourselves — or more precisely when I was lying to myself. The studies were also important as an opportunity to meet people since we were able to devote our time to these friendships that still last. Last but not least, I also performed in these shows at the Academy and even starred in one of the films made by Vít Soukup.

During my studies, I realised that I enjoy documenting and marking down events, and working with the reality that surrounds me. This is actually something that I am dealing with even today, especially through painting as a medium — I devise drawings that document various events or situations that I find myself in1.

I work quite slowly and I tend to spend a lot of time on various more or less useful reflections, especially when I paint on canvas. I consider painting or more precisely the act of painting to be work. A conscious yet simultaneously free process. I work with motifs that may seem banal but that is exactly why I choose them — to be as straightforward as I can be.

Quite often I focus on figurative painting. Even though the painting comes to depict nothing more but a figure but I am intrigued by the structure of the painting and what happens in the empty space2. The joy and the pleasure that are derived from all those gestures and work with paint and matter that create various effects, and in general from all the activity and movement that happens around the painting are certainly a part of the process. I find the search for different colour correlations, new impressions, albeit strange or dubious ones rather enjoyable.

I am working with an intention of creating a good painting — I am invested in the physical outcome and I pay much attention to the execution. However, the meaning behind why I do this is equally important for me.

Even though the reason might be a vague assumption it is better to be aware of its vagueness. It does not exclude the possibility of distancing, correcting oneself, searching for a different solution or simply waiting. I try not to overestimate my work or my will that motivates me but I also do not underestimate it.

I accumulate the layers of paint, constantly and even obsessively repainting. It takes me quite a long time to arrive at the point of being satisfied in which the painted outcome no longer irritates me.

This is how the Living Rooms series was created, whose theme is the dwelling of friends of mine, including their figures3. Subsequently, I created the series We Are Here, for which I painted portraits of my friends and people who are somehow connected or present in my life.

During the time when I was trying to quit smoking, I began working on the series of smaller drawings called Eyes Deep Open because, even to my surprise, I could not face a larger format without a cigarette or the thinking accompanied by the cigarette.

In all the series, including the cycle It’s so merry here , I depict the environment and the spaces of the school where I have been employed with some breaks for the past 24 years4.  I also keep painting floral still lifes indefinitely5.

Occasionally I work with illustration and in these cases, I take on a more factual approach.

An exception is an authorial book called Soňa’s Power, in which I reflected my passion for comics and women heroines.

I gravitate towards these personal topics not because I think that my life is somehow particularly interesting but because I cannot offer anything else.

The text was created in collaboration with Katarína Klusová (2021).