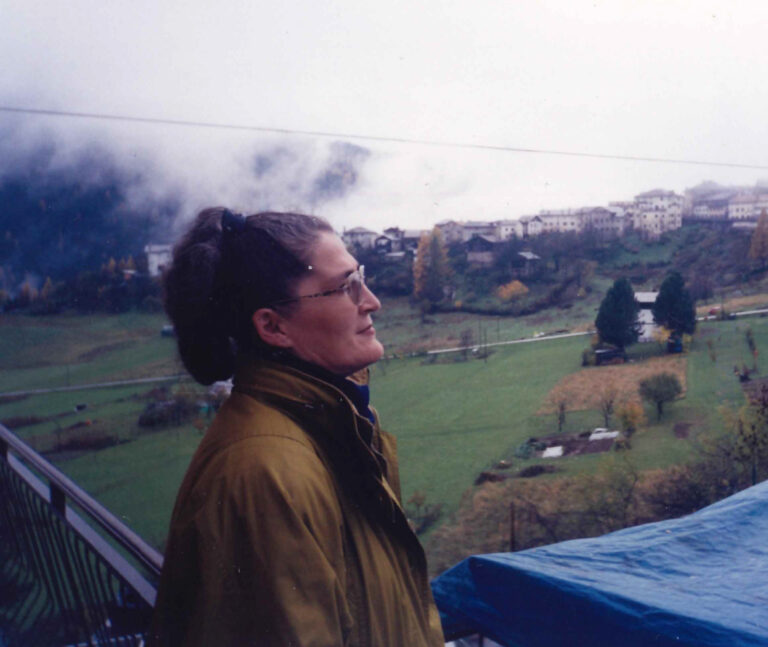 – born in 1951 in Durrës – passed away 2005. She worked mainly with the medium of Textile, Painting, Drawing and Installation. Graduated from the Painting Department at the Higher Institute of Arts in Tirana  in 1972. During her studies, she specialized in textile. From 1998–2005, she worked as an art teacher at the Jordan Misja Art High School in Tirana.

Diana’s wish to follow the path of art was personal, this was acknowledged and supported by her family. Back in her early childhood and youth, she got involved in art drawing courses (as they were known before) in her birth town, Durrës. Subsequently, she followed on to higher studies at the Academy of Arts, Textile Design branch, where she graduated in the academic year 1972-1973. Textile design was a branch of the arts that was not her personal choice, however, it was embraced by her nonetheless1. This branch, to which the artist would commit herself so much, would become the main medium of her practice.

Following the completion of Diana’s studies at the Academy of Arts, now known as the University of Arts, she worked at the design bureau of the Carpet Factory in Kavajë, as a designer of the rug models, mainly destined for export. In 1973 she was transferred to Tirana, where she was appointed as a teacher in the subject of artistic drawing at the ‘Mihal Grameno’ school and at the ‘Visual Arts Teaching Course’ at the Palace of Pioneers also. In both positions, she made her contributions, by way of training and encouraging generations of pupils towards the path of visual arts. Following a not  very productive period of creative practice, due to the absence of an atelier premises, she was awarded the ‘Leave for creative practice’ for a couple of years and thus she was able to create some work, mainly oil on canvas. Most of these works have been donated and there is no precise documentation of them, apart from a portrait of her son.

She was closely connected to art and she considered it to be part of her identity, while her teaching activity was considered by her as a profession. To her, artistic creativity was an indispensable part and form of expression of thoughts and feelings, much more so during the difficult years of communism, as such a thing was not so easy. Even subsequently, following the change of political systems, times remained troubled and to her art was a meaningful and  simultaneously liberating activity. With the emergence of democracy, artists finally found their FREEDOM, thus liberating themselves from the visual dogma imposed by Socialist Realism. The artist brought an intuitive approach2 into the focus of her practice, thus initially deserting the classical forms of composition, as well as technical level implementation. Subsequent to the 1990s her art tended towards improvisation, as she conceived that some moments were more inspiring compared to others, and consequently, she did not generally transfer her ideas into sketches, croquis, bocete etc. As a result of her spontaneity, she had fruitful creative periods, as well as others which were less so.

The transitional changes in the 90s brought about a new development in her creative practice, which was reflected also in her works. She goes back to textile, this time with a new perception of composition, whereby the distinctive trait from the perspective of conception being the creative tendency towards free geometrical3 and more organic abstraction4.

Referring to her technique, the creations of this period have been produced with poor organic materials, and very often previously used (mainly wrapping materials) or had  been in industry use from prior to the 1990s. Taking into account that in the course of the transition years there were significant shortages of materials and means for producing the works in textile, the artist tended to use spare materials from the textile industry, remnants of the communist period, and also combining them with materials leftover from import products, such as coffee, rice sacks5, various cotton, wool, linen threads6, etc. A part of these materials were coloured manually to reach the necessary tonality7. Consequently, many of her works were characterised through a recycling and re-utilising approach. The artist has in many instances produced crochet work with cotton threads/fibres, being inspired by popular traditional techniques, thus using them in producing images permeated by a modern and contemporary spirit. These techniques provide a new added value in her creation activity.

Her ideas and composed works in textile were casual, sensual and decorative creations, which did not draw on concrete topics. The composition of her work was closely connected to the materials being used, and as such the sensitivity that the material was providing and the interaction among the materials had a decisive impact on the final work8.

Being a house-wife and mother have been a factor for f her creative practice going through less active periods. However, she always found the time to create. Her family members recall her working everyday, even on small things. Most of her works have been produced within the perimeter of the home , which was adjusted to function also as a studio, and where all the family members were involved in various processes for the production of the necessary materials for the textile: such as producing the wool threads, unweaving of sacks, colouring them, preparing the support structure for the embroidery, etc. A further innovation was the use of random materials, found casually, which she creatively adjusted and transformed according to the need of the piece. Every single textile work was produced without the  avail of any machinery or loom, but she adjusted auxiliary structures (like griddles) whereby she fixed the pieces she weaved. Weaving occurred mainly using big needles, up 15 cm long, which were produced by herself, with the assistance of her husband, mainly for wool threads. Some of her works produced in textile, have a co-authorship including her husband, Fatmir Miziri, who is also an artist.

Around 1995, the creative practice was resumed in the studio. She started to try new techniques during the recent years, thus producing works in installation, whereby it is worthwhile mentioning the intertwining of the textile with the technique of the adhesive on glass9 or the production of silhouettes on film negatives10, which were to be projected on the wall. She experimented even with small metal structures being intertwined with the textile, which remained incomplete and un-exhibited. She has left some sketches11 of projects she wanted to realise.

From 1998 she taught the subject of drawing and painting at the Artistic Lyceum ‘Jordan Misja’ until she passed away in 2005.

Statement written by the daughter of the artist, Ela Miziri in collaboration with Adela Demetja (2022).