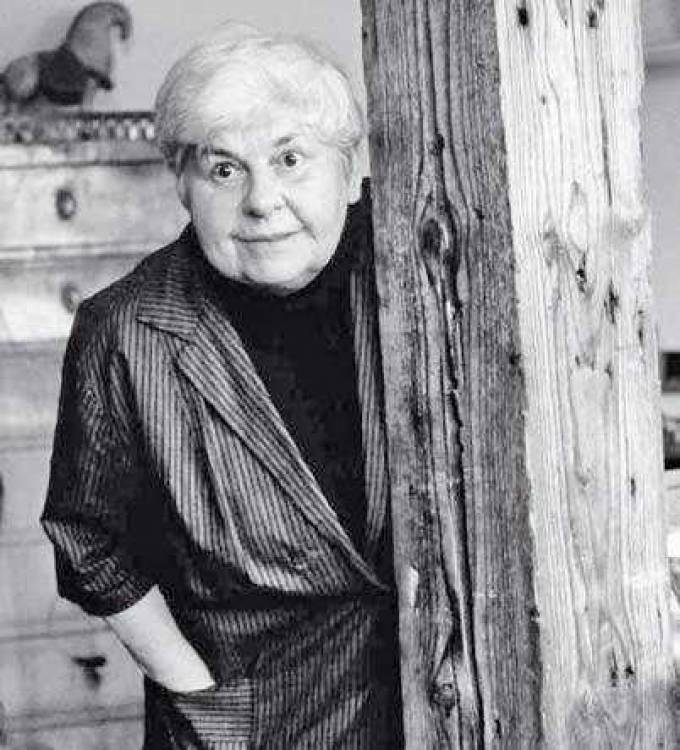 – born in 1926, died in 2012 – was a Czech documentary and reportage photographer. She graduated from the State Graphic School with Jaromír Funke and Josef Ehm (1942-1943 and 1945-1946) and then at FAMU where she was a student of Karel Plicka. She has long devoted herself to children’s photography, and also created the cycle Personalities, the Vltava or the Power of Age. In 2001 she received the Za zásluhy [Merits] prize.

When I started photographing life, it was dangerous to appear in the street with a camera, because if one did not take Hradčany or souvenir photos, one became suspicious. But taking children’s photographs was tolerated. Besides, the theme of children caught me as it was actually the only freedom that was here at that time (after 1948). I liked best to photograph children who played somewhere at the outskirts of Prague, Košíře, Bílá Hora, Karlín… In all those places children played in the street. I didn’t know them, and they didn’t know me, but you have something in you to understand them.

At first I went to a graphic photography school, after the war I finished it, because during the war the school was interrupted. At that time, we were sent to forced labor (Totaleinsatz) at Barrandov. Then I went to practice with Illek and Paul, a renowned Prague company at the time, where monuments and advertising were photographed at the highest level. It was great practice. Photos were also taken on glass plates, but mainly on a large format from a tripod. I accompanied Alexander Paul several times when he photographed churches, interiors and statues… When you look at someone who can do it, you learn a lot. You can do it differently, but when you see someone who is already “someone”, it will teach you. Yet I still considered it a bit of a prison, because it was from nine to twelve and from two to six in the evening, and all day was gone. Then I met Jan Šmok one day, he was a friend of mine from  the graphic school and he also was in Totaleinsatz with me, and he told me that he was attending FAMU for a year then, you have to go too. So there I went and I was admitted. There were no women, just some pretty boring guys. I made entrance exams in 1947, it was the American curriculum at the time. And just after half a year, the (“Victorious”) February came, and everything changed so that I wanted to flee from there. And then I said to myself, let them flee (!), If they don’t kick me out, I’ll stay here. But such a school is amazing in that you meet people who also want more than most people who don’t do anything at all. But finally, things got so tangled up that in the end, the worst of all was the kind of nodding1.

The Totaleinsatz at Barrandov was in a way cruel. I worked 12 hours a day from six in the morning. At that time, I lived in Ořechovka, so I got up at about half past three. And because I was a manual worker, I walked from the final tram stop, I didn’t mind, but it took longer. We worked in laboratories and made photocopies.

My first idol photographer was Jaromír Funke, he was my professor. I was fifteen then, and I don’t think Funke was happy with us then. He was a tall, funny and ironic man, and we must have been bothering him a lot. But thanks to him, I understood that daylight is something beautiful and that artificial light is actually tricky, and when one learns to work with daylight, one can avoid the artificial one. And then what really shook me up was The Family of Man [exhibition at the Museum of Modern Art in New York, 1955] and Henri Cartier-Bresson and the Magnum Photos community. I was interested in European and American live photography. But in our country there were almost no examples to follow2.

I probably found my expression in photography by not thinking about it at all. It has to be felt from the inside, it’s hard to explain. Each of us is different, each of us think something about something, we feel something, and that shapes us to make the art we want. If no one interferes, it will somehow succeed. It doesn’t come right away, for a while you tear everything apart… But I don’t have much development, I kind of still like the same thing. Live photography still attracts me, the change is installed by life itself that is constantly changing, so it can never end. I develop everything I took, but I’ll throw out half of it. Digital photography is probably not for me, I will stay with analog, I edit it only by selecting… I do not make cutouts, only enlargements. If it is a cutout, I consider the photo already badly seen. According to the photographer, he should be able to handle it so that he does not have to carve it. But this is an ideal condition that rarely occurs. Of course, I prefer the act of taking photos to developing them. Photography is terribly exciting, it’s a rush – so that  the moment doesn’t escape, that you are on spot, that you don’t get knocked down – it’s simply dramatic. You take some rest when developing, and if it does not meet your expectations, you scold yourself. Photography still surprises me, but I’m not happy with anything.

I photographed Bohuslav Reynek, he was an extraordinary man. I don’t know if people like him live today, if so, it’s beautiful. He lived on a dilapidated farm, he was a poet and an engraver. He had two sons, his wife was a Frenchwoman, a poet, Suzanne Renaud. When he was younger, it was said that in the summer they lived on a farm in Bohemia and in the winter they were in France. When we visited him, he was alone with his sons. At the time, they were completely unacceptable to the village there, to their National Committee – the sons, although they knew several languages, one worked as a bus driver and the other fed pigs. Bohuslav Reynek got up at about three in the morning, made fire in the stove I have in my photos, and cooked food for the pigs, engraving his plates… Then he woke up his son, who had to go to the bus. When we were there, he could be heard that he was completely satisfied that if he had to be in an editorial office or the like, it would disturb him. He was there with music, God and his etchings. He didn’t mind being photographed at all, he was somehow over it. He was above everything3.

I also photographed Josef Váchal, as an old man, he was already like a devil resembling those he painted. He knew we were coming, but he wasn’t home. Eventually we found him and he took us home. Then it turned out that he didn’t want to let us go. So we barely caught the bus to Prague. He was funny and obstinate. It was fascinating how he managed to live in that chaos. I took a picture of him reading his Bloody Novel, which he said was slanted so that the blood could drain well. There were old orange peels everywhere, supposedly for the elves45.

I then returned to the cycle of portraits of writers after years, unfortunately I did not have time for many people. For instance Kolář still looks the same. But e.g. Karol Sidon has changed. I also took pictures of my parents, but it’s more difficult. When you’re still with them, it’s harder to see. But I started with them. Yet they probably weren’t very happy with the photos, maybe just a little. My father was an intellectual and a journalist himself, so he regretted that I was not a studying type, so it would be good to do something about me and not bother me with schools. In the end, they figured out that I might be a photographer, maybe a reporter. That’s how it happened.

Created from a transcript of an interview between Dagmar Hochová-Reinhardtová and Marek Eben in the Czech Television program Na plovárně (July 10, 2002). The answers were selected and edited by Eva Skopalová (2021).