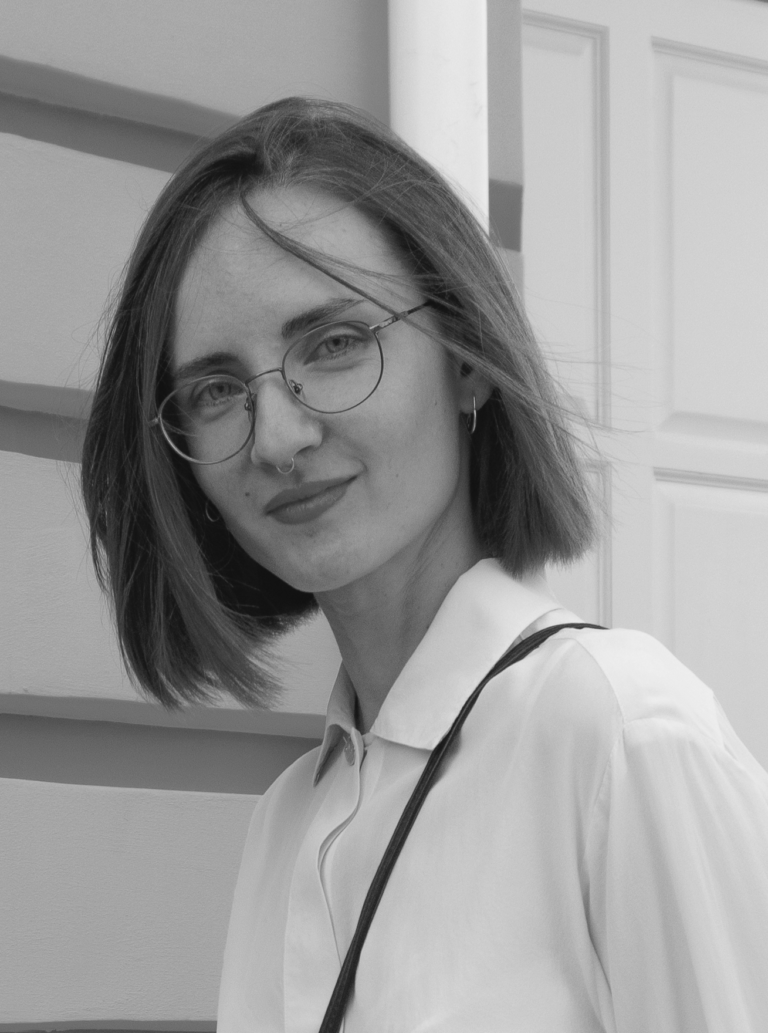 — born 1988 in Zaporizhzhia, Ukraine — artist, curator, illustrator. Graduated from National Academy of Visual Art and Architecture (2015) and Contemporary Art Course (2015). In her work, she explores the visual traditions of Ukraine’s painting school, historical memory, political aspects of a landscape, gender performativeness. Works with such media as painting, drawing, video, installation. Practices collective exchanges and cooperations. Since 2009, resides and works in Kyiv.

…being in dire straits while enduring of success and achievement

Me becoming an artist is a long path, inseparable from becoming a woman. This, in turn, is not about accepting “the woman’s destiny», but sliding in between «traditions, actions, ages and genders”; it is about escaping from dual machines, cutting them in halves (in Deleuze’s and Guattari’s meaning). My artistic practice is a possible fragment in the dotted line of Ukrainian art history — but not the one that is marked by the logic of the national representation, but the one that has been written inconsistently in Ukraine. Without calling my art a “feminine” one, I am not deviating from the political position and feminist discourse. It is rather an attempt to move in reverse direction: to find out what feminist elements my practice contains.

My academic art education was based on mastering the skill. But the painting which I had been studying for a long time never fully satisfied me. Yet I am turning back to painting to reconsider its limitations and capabilities. In the work Study To Learn How To Draw12345 I engage the course book on drawing and question the Soviet teaching methodology. When one studies at higher educational institutions whose syllabuses were last updated in the 80s during the SSSR times, and teaching methodologies and teachers’ manners are macho-sexist instructions given by «big masters» who are always engaging you into the sadistic battles — even then the most confident belief about finding your “own path” would be threatened under the weight of a exemplary figure of “a genius artist”. Undermining such a matter of things, reflecting on my educational trauma — this is also an elaboration on deconstructing the established patriarchal order.

Feminism emerged in my life during the Maidan via me getting acquainted with other partners and activists. Subsequently, it soaked into my art. At the exhibition “Cave of Golden Rose”67 — the one that the four of us worked together on, friendship was one of the key principles of our curatorial work. Female friends — these are the people whom we can share not only the passive living-through our destiny with, but whom we can mutually charge and jointly act together with. “There is no life and no art without a female friend!” — as the creative duo Welcome into the Puppet House! stated.

The economic conditions of being an artist makes me doubt that this is my profession. The lack of support and a system of professional circle involvement through the educational institutions in Ukraine places the responsibility onto our shoulders for not only a conscientious work, but also for an independent acquisition of resources and skills needed for an artistic practice. Reading Book89 is a self-educational project that includes female participants of diverse backgrounds and is based on the principle of networking. With attention to gaps, we discuss the relations of materiality and discourse in order to satisfy and strengthen our own symbolic existence.

Working for Concrete Dates Collective (Ukrainian abbreviation: KKD) was an important, yet traumatic stage of me becoming an artist. In the collective where the majority of males received education in humanities and had quite the silver tongues, women usually found themselves in a situation when they were incapable of skillfully articulating their thoughts. Because of this, within the group’s dynamics the gender imbalance was evident. Later, I began to give preferences to women’s collaborations.

The KKD-Collective was formed on the basis of the Contemporary Art Course which I joined in last years of my studies at the academy. The course rested upon the principle that we had to engage into an equal exchange of thoughts. But when you are used to being an “empty vessel” that is filled by an “all-knowing” teacher, switching into the mode of an active producer meant that you had to re-consider yourself and knowledge as such. Studying at the Contemporary Art Course coincided with the revolutionary events, and they influenced the conceptual discursive direction of the educational process. One of the KKD’s first works was Silence, Movement, Repetition1011. It explored dissident movements of the 1960s and came about as a performative action in a public space where we developed relationships not only between ourselves, but directed our attention into history, rethinking methods and instruments of collection action.

Within the Ukrainian cultural field, the demand for feminist art is gradually growing and that, on its turn, forms a new market. Labels that few people wanted to be ascribed to fifteen years ago, are now becoming almost a pre-requisite for a female artist’s existence. Unfortunately, Ukrainian art contains many sad female biographies. During the Soviet times, women had an opportunity to build up a career like men, yet they did not avoid repressions. In the 1990s, many female artists found themselves in the midst of wild capitalism that swept over Ukraine after the collapse of the Soviet Union, and faced inequality as well as impossibility of developing professionally.

Due to economic and other life circumstances, many women were compelled to abandon art in favor of craft, pedagogical and other types of work, dedicating themselves to survival and child-raising whose parents-artists often avoided the responsibility.

Nowadays, the degree of sexism seems to have dropped significantly. However in reality, the patriarchal order is acquiring a more sophisticated and veiled shape that calls for new battle strategies. Me personally, I am interested in fragile, unstable, every so often low-profile collective practices as well as introducing the feminist optics into anything: leaping out of binary oppositions, redrawing of space, shifting of power dispositions. According to Helen Deutsch, female subjectivity is based on narcissistic trauma — can art be a space for pride and narcissistic injuries treatment? Being a female artist means to be in constant conflict with your perfection.

Catching myself in painful doubts about “whether I am worthy of the real artist’s title”, I turned to the “impostor syndrome” (is it a coincidence that these were exactly the female researchers who started using this term?). The female impostor artist undermines the legitimacy of art. She claims the “general right to speak on behalf of no-one in particular”. She creates art in her spare time, despite hindering circumstances, and moves through doubts and errors. It is the essence in which she exists.

The final version of the statement was edited in collaboration with Oksana Briukhovetska (2022).

…being in dire straits while enduring a fantasy of success and achievement.