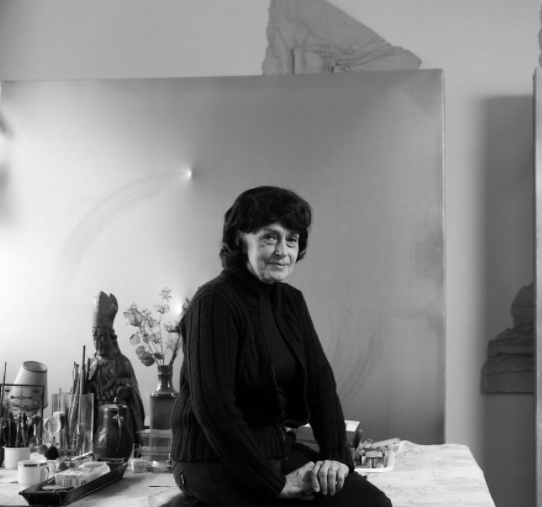 – born in 1940 in Prague, Czechoslovakia, a sculptor and graphic artist. At the end of the seventies, together with Jaroslava Severová, initiated regular meetings of artists, which resulted in two unique group exhibitions of artists from the “unofficial” scene (9 [1981], 15 [1982]). In 1990 she became the first professor of free art in what was then Czechoslovakia (between 1990 and 2003 she ran the Studio of Conceptual and Intermedia Creation at the Academy of Arts, Architecture and Design in Prague, from 2005 to 2012 she worked at the University of West Bohemia in Pilsen). Initially she worked with resin and papier mache, later she began to focus on intermedia overlaps connected with sound and the new media.

We do not choose the time in which we are born

Each phase of my artistic activity follows in a specific way, expression, material used and form of processing the previous phase. If anything drove me forward, it was the ability to discover questions, inexplicable for me at that time: how far can my mind reach and transcend the boundary of the real and reveal somewhat the secret stored in my unconscious with the help of a focused mind. Recently, the topic of the existence of being, following the consciousness of man in connection with the cosmos, has become my focus. An example is one of my recent exhibitions Infinite Convergence and the subtitle of the works We Ever Swear1 or EveryoneSometimes Wanted to Touch Being2.

A burning topic, even with regard to my life experience, is the question of equality between men and women, which I perceive as a cultural achievement of an advanced society with an emphasis on dignity in action, equal pay at work, equal opportunities and ethnicity. But I must admit that our society has not yet reached this level, so the field is still open to dissatisfaction. In the field of equality, there are certain given facts: a woman gives birth to a child and a woman’s skeleton is more fragile than  man’s. The consequences that follow from this always create a contradictory situation in which a woman is not much regarded.

When I studied at the Academy of Fine Arts in Prague (1958–1964), we had two women and about ten men in the studio. After two years of preparation, I went to a special course of Vladimír Sychra’s Studio, where it was more gender-balanced. I can’t say that there was any discrimination against female students, rather there was a kind of grade hierarchy. Senior students simply wouldn’t talk to us. Vladimir Sychra was an intellectual, he had his natural dignity and his dealings with us were impersonal.

My generation was a generation of solitaires. As soon as we left school, all possibilities were closed to us for political reasons. In 1965 my daughter was born, my husband was serving in the army, two years later my father died and my mother fell ill. I worked on my things at night. The  brief time of freedom around 1968 was artistically too short for me. I still managed to go on a UNESCO scholarship to Paris, from which I had to return earlier due to the student riots in May, and when I arrived in Prague, Soviet tanks were standing on Wenceslas Square. Nevertheless, I completed several of my own exhibitions until 19713. But that was the end of free art for me for many years. The only option left was to “work for the drawer” as it was said at the time.

I tried to make a living somehow for the next few years. I worked on architectural realizations and also restored a lot. At work, my colleagues and I helped each other, everyone had a problem making a living at the time. After 1971, existing investors in the field of architecture and other fields were replaced by more politically savvy ones. Work-in-progress has been suspended for a long time or even canceled, which happened to me too. I inadvertently got into debt and it took me long to repay it. In those turbulent times, I mostly met with Jaroslava Severová and other classmates from the Academy of Fine Arts, but those meetings were sporadic. The men, on the other hand, went to a pub for a beer regularly and sometimes took their partners. But it was mainly men’s company. They knew about each other’s whereabouts far more than we did, but mainly informed each other about what was happening among artists, about job opportunities, about cellar studio exhibitions and about music and other underground events – see the Jazz Section, which later published interesting miscellanies that took the long way round to get to us.

Time passed, the political situation became more and more difficult, so it occurred to me and Jaroslava to organize similar meetings of women as well. We invited basic circle of acquaintances and they invited their friends, so our society grew. We met in the Makarska wine bar in a closed room called the Vagon. I remember the first contribution was the story by Věra Janoušková about the Polish artist Alina Szapoczniková, who came to the Academy of Arts, Architecture and Design in Prague straight from the concentration camp after the war and became their classmate. Later, after 1968, they all visited her in Paris, where Alina emigrated with her husband, a talented designer. Alina was a great inspiration to Eva Kmentová. I was also very interested in her work and destiny and all the stories around her, especially her bravery. The other conversations immediately went underway. The writer Alexandra Berková came several times, with whom I met again working at the Literary Academy in 2005. Otherwise, we shared our worries, we talked about our work with an interest in other professions, because there were also architects and glassmakers and, of course, about the political situation. And we also laughed a lot4.

In the Wagon, we pulled out suspicious wires, thinking we were being tapped. It was more of a joke, because, as we found out, it was a wire radio, such a unified socialist good mood tuner, a rarity of its kind today. We did not create any conscious feminist program. For the time being it sufficed to us that we got together as women, that we had something to look forward to, and that it was all fun and  it pulled us together. God knows what and how it would have developed over time. The first joint program was our two exhibitions. In 1981 at the Mělník Tower, a year later at Dobříš. Květa Křížová took over the curation and made a selection of artists, which was not an enviable situation at all. Our company was open to anyone who wanted to come, of course friends of friends, female and male, but the choice for the exhibitions was necessary. The opening at Dobříš took place without any harm. There was always a danger that someone would come and close the exhibition on spot. A lot of people gathered. But the men who came to the opening, mostly the artists’ husbands, looked as if ashamed of their wives. I don’t know exactly how to describe it, but it seemed to be beneath their dignity that their wives became entangled in such a situation. We were also reproached (although the then selection of artists are still resounding names today) that we put together an exhibition of such diverse fields as designers, glassmakers, sculptors, graphic artists or painters, which is united only by the fact that they all are women. It would not be such a problem today. The art society was quite selected at the time. Of course, we read Simone de Beauvoir, but each of us rather privately – it was instructive, but not yet feasible.

But what was our reality then? In 1991, I traveled with my family to America for a longer period of time, where I met a young New Yorker who asked me about the Czech situation and the feminist organization of women in the fight for equality. After almost thirty years of living behind the Iron Curtain, in complete isolation from the Western world, her questions seemed a little superfluous, even funny. While women in our country worked to exhaustion, demagogically worshiped by socialist propaganda, women in the West built their position in the free world of economically developed countries. We lived a completely different social and political experience. For the time being, we were just beginning to understand that we were finally living in a free world, and it was necessary to deal with this new situation honorably. I certainly did not have a satisfactory explanation for the young student in this regard. It often happened to me when I spoke to a foreigner in America that they could not understand our political and social history at the time and even thought it was a kind of personal excuse.

At the end of the 1980’s, the situation began to relax and I was given the opportunity to exhibit at the Basel Biennial. The organizer was the Art Center, then the only organization with international contacts. I was working with linen papier mache at the time. This unusual material was my own discovery, and I was able to create larger installations with it. Working with paper was then an international trend in art, especially in Western Europe.5 As my work was a success, another offer followed from the International Art Exhibition in Chicago. Of course, I could not go to America, but my father-in-law, a world-renowned occupational therapist, had successful students who emigrated abroad. They sent me an invitation stating that they would pay for everything and vouch for me, so I was allowed to go to the West. It was a shock to me. Yayoi Kusama exhibited with me at the show, whom I admired very much. I could meet her and see her work live. After the exhibition, I lent my objects to the Baruch Gallery in Chicago for a year.

At the beginning of 1990, I started teaching at the Academy of Arts, Architecture and Design in Prague, where I ran the Studio of Conceptual and Intermedia Creation until 200367. As far as women’s emancipation is concerned, the situation at school seemed far more balanced to me than in the past. This was mainly reflected in the respect and seriousness with which the work and personalities of the students were approached. But I am under no illusions that much has changed in this regard in my professional life. Even because of globalization, which is constantly creating new political-socio-cultural conditions, the path to gender equality is becoming increasingly difficult89101112.

The text was created in collaboration with Marianna Placáková (2021).