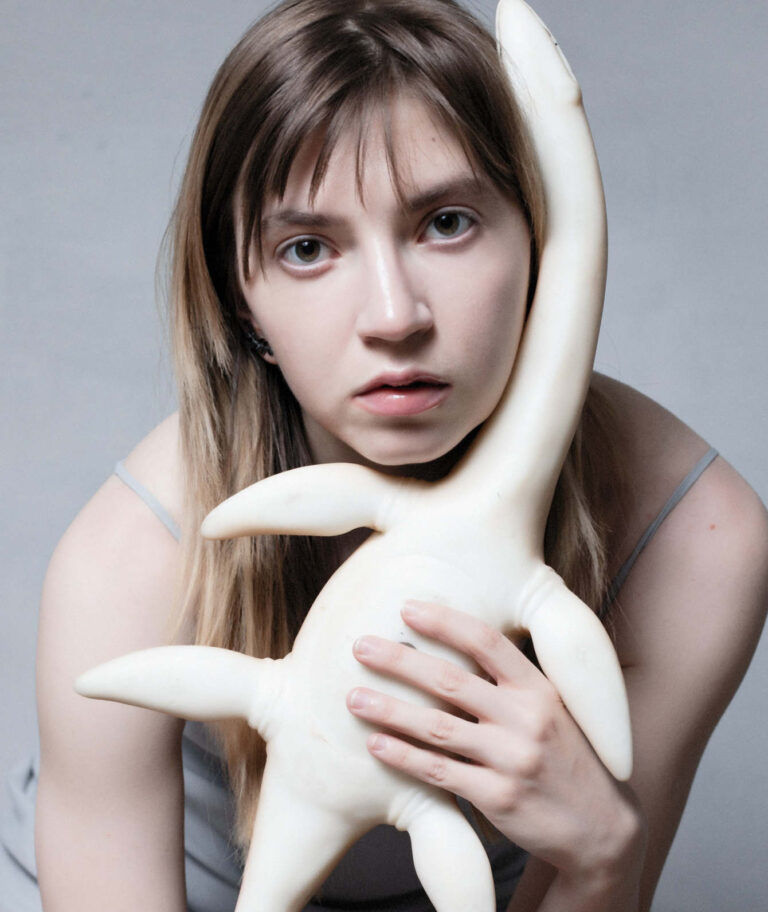 – born in 1990 in Kharkiv, Ukraine. Emerging Ukrainian artist currently based in Oakland, California. She obtained M.A. in Philology at the V. N. Karazin Kharkiv National University in 2012. In 2013 she continued her education at the Rodchenko Moscow School of Photography and Multimedia, where she completed her studies in 2016, under the mentorship of famous artist and photographer Sergey Bratkov. Her artistic practice embraces video, installation, performance, photography, and mixed media collages. In 2020 Uli was nominated for the second time for the Pinchuk Art Center Prize and won the Second Special Prize for the project “Look, she’s got beard”, she also received the Emergency Grant from the Foundation For Contemporary Arts for the same project. The cornerstone of Uli’s art practice is storytelling. Fascinated by speculative fiction, cosmism, and futurism, Uli has been trying to find alternative models for existence and coexistence. She is interested in constructing narratives that would inspire the viewers to dream of possible new realities, relations, and power dynamics.

I am walking back home from work, tired and in a bad mood. The streets are almost empty. Walking by the lake, I am watching the pelicans dive in for the fish. The violence of everyday life. The fish has to die so that the pelican can live. Should I feel sorry for the fish? If the pelican doesn’t kill the fish it will starve and die itself. So is violence natural and necessary for the survival of species? But humans are different from other animals. They often get pleasure out of violence, so for humans, it’s not just about survival, or is it? Maybe psychological survival? Why does a maniac need to kill? Why does she get pleasure from killing? Is it because she got her power taken away from her? And now she’s reclaiming that power by committing murder, a symbolic act of taking her power back? She reenacts that revenge scenario over and over again12345678.

If you think of it, that’s why violent and rebellious characters are so attractive in movies. They help us cope with our own realities and survive our boring “normal lives”. So is violence on the screen actually a good thing, a remedy for our repressed psyche?

My thoughts are interrupted by a scream. I turn and see a woman pushing somebody into the lake. The victim falls and disappears under the water. I gasp: “What should I do?”.

The offender must have heard me, she turns to look. Her hands and clothes are covered in blood. But what surprises me the most is that her skin is shiny green! Her eyes are red. And she has scary pointy teeth. She looks like an alien. Our eyes meet. I turn away hastily, in horror. I start to walk away, quickening my pace.

“Crap! She saw me! I’m a witness to murder now! What a shitty day!”

Shit, the green alien woman is following me! Well, if she does kill me I will never be able to shoot all those movies I was conceptualizing:

Plantopia. Speculative fiction about what utopia may look like, according to plants. I’m collaborating on this one with a group of plants. We use a database of different sci-fi and fantasy scripts. Plants and me, together, are choosing interesting episodes and combining them into a collaborative script about a world where plants develop a conscious mind, self-awareness, and also the ability to control the minds of other living organisms.

Holobiont, a film about a virus teaching humans to interconnect and collaborate with each other and other non-human species, developing new unprecedented symbiotic relationships.

Mosquito woman. A film about a policewoman able to turn into an insect to spy on her suspects and solve murders.

Lilith, a film about reinventing the history of gynecology and racial oppression, empowering the women used by doctor J. Marion Sims for his experiments. It’s a story of an alien invasion and is courageous enough to deal with it all and ensure the survival of the human race.

Objectified, a film about the emancipation of objects. A  revolt of objects against their owner, a contemporary witch/scientist—who turns humans into objects and collects them. The film questions the dichotomy of the object-subject relationship.

Sourdough, a film about a woman going through menopause. For her, baking is her  escapism strategy. She develops a strange romantic relationship with dough, which turns out to be a living conscious being.

Ukrainian vampire slayer, a film about an artist and a vampire/demon slayer. Her job is to maintain a balance between the parallel words using her skills of combat and art. However, she starts to question anthropocentrism and her right to slay the non-human beasts.

Nonhuman, a film about the apocalypse, where all the humans are dying from an incurable disease, and only one girl is going to survive on the planet, she feels extremely lonely and conflicted. The film deals with complex mother-daughter and interspecies relationships.

My president, a film about a slime mold waking up in the body of a president. Now that she’s become a human she has to deal with all the challenges it involves. But it turns out that being a president might be quite fun… etc.

Gosh, I was so busy working, earning money, that I didn’t have any time for any of my art projects recently. And now I’m gonna die from the hands of a shiny green woman! The universe definitely has a weird sense of humor! If you think of it, most of my projects involve aliens, fantasy characters, or zesty non-human species…

Is this how my life is gonna end? What about all the ideas I didn’t get the chance to explore yet, all the topics I was researching, and what about all the other fascinating projects I was planning to do? For instance, an online sanatorium, or the harvesting exercise machines—machines that simulate historical human activities that are no longer performed by urban populations. Or self-sustainable robots—parasites living in the cities along with urban animals. And other projects involving interspecies relationships, explorations of the non-human and speculations about our common futures…

Why is she green? Maybe green symbolizes nature? And she wants revenge for what humans did to nature? Or maybe she encompasses the feeling of alienation? Is she a metaphor for this haunting alienation that I’m feeling? Being a migrant, having to worry about money every day, being unsure of your future. Being an alien—that’s exactly how I feel!

I try to pinch myself and suddenly notice that my hands are shimmery green too.

— What the heck! Maybe it’s just the street lighting? I hope so!

Looking at my hands, puzzled, I stumble over something soft lying on the ground. I fall over. I look down to see what it is and it’s a dead pelican. Now my clothes and my hands are all red in it blood. Why is this happening to me?

My last resort is to outrun her, hide somewhere and take her out by surprise. Maybe push her into the lake, or knock her out with something heavy on the head. I’m done being nice! Pushing her into the lake seems more civil, though. It will take her a while to get out and meanwhile I will escape. So I run as fast as I can and hide behind a shrub. Waiting for her, I notice that this is exactly the spot where I saw her push the other woman into the lake. I see her coming, she’s looking for me. She stops. I jump out of the bushes and push her into the lake. She gulps indistinctly and I start screaming because up close she looks even scarier with her sharp teeth and red eyes. She falls into the lake. She watching me from under the surface of the lake with her red eyes. She seems content now, she’s smiling. I have goosebumps. I hear a shriek, I turn around and see a passerby: a woman looking at me, in fear. She saw me pushing the alien into the lake. I look at my reflection in the water and it looks horribly familiar: my skin is shiny green and my clothes and hands are all covered in blood. (pelican blood!) The girl who saw me push the green woman into the lake starts running away. I feel that I need to run after her! I have to explain.

“It’s not what you think! I did not kill her!”, — I shout, but nonhuman words are coming out of my mouth, just some strange gurgling noises.

This must be a dream! Or maybe it’s just one of my movies?

As they say, all science fiction is a mirror to our world…

The text was written in collaboration with curator Kateryna Iakovlenko (2022).