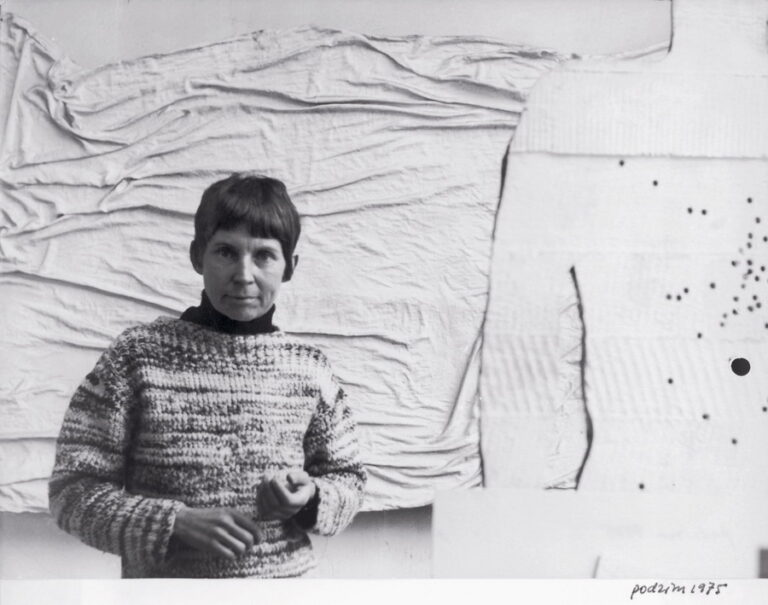 – born in 1298, died in 1980 – a Czech sculptor. She graduated from the studio of Josef Wagner at the Academy of Arts, Architecture and Design in Prague, where she met her future husband, the sculptor Olbram Zoubek. Kmentová belonged to a group of sculptors outside the official art world.  In 1970, her exhibition Footprints, produced by Jindřich Chalupecký, took place at the Václav Špála Gallery in Prague. In a radical move, Kmentová introduced the idea of negative space, which was the central theme of her work with clay.

“I think my “art” originated between the ages of 6 and 12. (Then it took me until about the age of 30 to work my way back to it.) I was lucky because I lived in the countryside. I was alone on the ponds’ white, frozen surfaces. Silence. Only the traces of my skates or skis. Imprints of bird tracks. Silence when the snow fell from the trees – like a veil. There were many moments that I remember strongly. I don’t know what I thought – probably nothing – but it was so grand, so full, all encompassing, to the point of being unreal. Perhaps some big childish joy, or more likely the sense of something beautiful to come.”1

“Women’s art holds an extensive and meaningful place in the Czech lands (not in Slovakia). It is no longer a fringe oddity, on the contrary many painters, graphic designers and sculptors belong among the central figures in Czech art. The participation of women in art is on par with the world’s general tendencies, but Czech women’s art is significantly unique. It did not arise from feminist protest, and although it carries many specific elements, it is not derived from a specific program: the femininity of this art is only a consequence of the necessity and transparency of its manifestation. Eva Kmentová was an extremely prominent figure among Czech visual artists precisely because her art was supremely feminine. It might even be said that this very femininity determined her artistic value. However, the path leading to her own form of expression was not a short or easy one.”23

“At 10 years old, little Eva was already convinced that she was going to be a [sculptor] – like her father. For this reason, she didn’t even go to high school, but after finishing her basic education, Eva went straight after the war to the School of Art, Architecture and Design, first to study with professor Nušl and then to the department of sculpture, under the tutelage of Josef Wagner.”

“In this extraordinary school, an extraordinarily lively atmosphere was created. Many young people who were important in Czech sculpture met there: Palcr, Vladimír and Věra Janoušek, Chlupáč, Preclík, Fibichová, Šimek, and Zoubek, whom Eva would marry after they graduated. The first photographic document of Eva shows her in front of a plaster model of a larger-than-life-sized manual laborer struggling in some unlikely way with a large gear wheel. She is a slim, uncertain, smiling girl surrounded by confident and purposeful young men in overalls with sewn-on badges. The photo is from 1950; she was 22, still attending school, and the statue apparently served as a decoration for a political celebration. There were many such sculptures at that time made of plaster or cement, which were removed and eventually destroyed after the festivities. This – socialist realism – was taught in schools.”45

“In the years after graduation, her art was lacking […] Among other things, she and her husband had two children, and they made their living as restorers. But young artists began to gather, to discuss and learn about modern art, and face their work. […] Kmentová felt disconnected to the introversion of surrealism; she was fascinated by Cubism and from there, other related extroverted art: Léger. Suddenly she felt like working, quickly producing sculptures whose contours she simplified, proportions she weighed dynamically, shapes she disconnected and made geometric. […] She joined the group Trasa, and when she entered a sculpture into the group’s exhibition, she – like Olbram Zoubek with his Shot to Death – aroused the offense of certain elements by “insulting human dignity with the artistic conception of a person with exaggerated proportions. Both must remove their sculptures from the exhibition.”67

“It all begins [this new approach to sculpture] with the opening of her own studio. She and Olbram Zoubek have shared a studio up until now. This new space was admirable, located in the neighborhood of Žižkov, on Kalinin Square [now called Seifertova Street, in Prague], once known as Karlov, across from the original General Pension Administration Palace building designed by the architects Havlíček and Honzík. It is an apartment building built around a courtyard with shared balconies, of which there are many in this proletarian area: you go up to the third floor and cross the balcony over the yard. The door at the end leads to the studio: you find yourself on the ground floor – the studio stands in a garden with trees and a gazebo. There is a hill behind the house, and the back wall is built into its steeply rising slope. Eva Kmentová calls this studio her lair. She crawls into it to hide from the rest of the world. The studio has old furniture that is only suitable for firewood. Eva is fascinated by these remains and begins to affix them to each other, then make prints of them in the clay. This reminds her of landscapes and figures. She adds the imprint of a pebble, the casting of a piece of cloth. […] Is it art? Who knows. Sometimes even Eva asks herself if she is succumbing to carelessness and irresponsibility. Where is the struggle with the material that is supposed to characterize sculpture, where are the great problems of modern art which are discussed in the ateliers?”89

“If Eva Kmentová often returned to her childhood, it wasn’t because she wanted to escape from the seriousness of adulthood back into some lost ideal. Neither in life, nor in her art,  did she ever void the experience of suffering […] if there was that original childlike innocence, acted upon by [the artist] Kmentová, it was she who allowed herself to incorporate the pain of adulthood into her art […] Undoubtedly, the painful destinies of both individuals and the nation itself showed up in her work (the word Jan on one of her reliefs represents the name of Jan Palach [who burned himself on 19.1.1969 in protest against the oppression of rights and freedom after the Warsaw Pact invasion of Czechoslovakia [in 1968]]. Eva Kmentová’s husband Olbram Zoubek removed Jan’s death mask, and it turned out later that Zoubek was actually a relative of Palach, which he didn’t know at the time).”10

“Inside Eva Kmentová, with her pure feeling for plasticity, lay an architect. She had good relationships with architects and often complemented new buildings with some abstractly conceived sculptures She also proposed her own new atelier in Radlice Na Kovářce. It was the baroque barn of a former farm with a red star; Eva Kmentová broke it to make large windows, divided the area vertically and horizontally into several different spaces, then modeled a garden on the hillside, such as belongs to such a building. Her old studio had been in the center of the smoky neighborhood of Žižkov; here she had clean air, quiet, and a long view over the Vltava river and high into the sky, a green grass and old trees: Eva was very happy here. But it was a fateful reconstruction. She dove into the work with unbelievable elan and therefore did not notice that she had a mild form of infectious hepatitis. She found out when it was too late. The infection turned into a chronic condition and took on an aggressive character. The treatment threw her into the hospital repeatedly for many months. That which delayed the progression of the illness simultaneously weakened her immensely. Beginning in 1974, she was able to work only very little. She had to stop making sculptures completely. She drew and modeled reliefs and sculptures from pressed, cut and torn paper, and later from adhesive tape and paper drink trays.”11

“When she died on the 8th of April 1980, she just missed entering her 52nd year. She had been a pure flame of life, inextinguishable, immortal, shining most radiantly from her eyes. Whoever saw her at the end of her life knew that, even when there was so little left of her body, that flame lit up even more. She had often had an almost predatory flash of lightning shooting from her eyes; this shifted into a steady light. The last time I was there, we talked about death. I had to ask her, with those glowing eyes, if a person really ever fully died. Is that which shines through us as mortal as our bodies? What do we know? Whether perhaps it disappears only because it is leaving to go to another time […]When she died, not a single obituary was printed, not even a simple piece of news. However, everyone who belongs to Czech art today came to bid her farewell at the crematorium. More than 200 of them. It was another manifestation of the strong bond between the artists, and though many had long expected her death, many said it was the most painful funeral of all.”12

“Something was revealed that had been deep inside me and only slightly suggested, something I couldn’t find. When I found just a bit of it, my entire life was changed for the better. With some difficulty and bitterness, I reconciled myself to the fact that I would not achieve much, or very little, and that I would have wanted so much more. Too bad. On the other hand, it was wonderful to experience life, albeit shorter, so beautifully.”

These excerpts from Jindřich Chalupecký’s book Příběh Evy Kmentové (The Story of Eva Kmentová), which he wrote in just under four months after her death, were selected, arranged and commented upon by Eva Skopalová. The introductory and concluding citations of Eva Kmentová are taken from the same text, quoted according to Chalupecký.