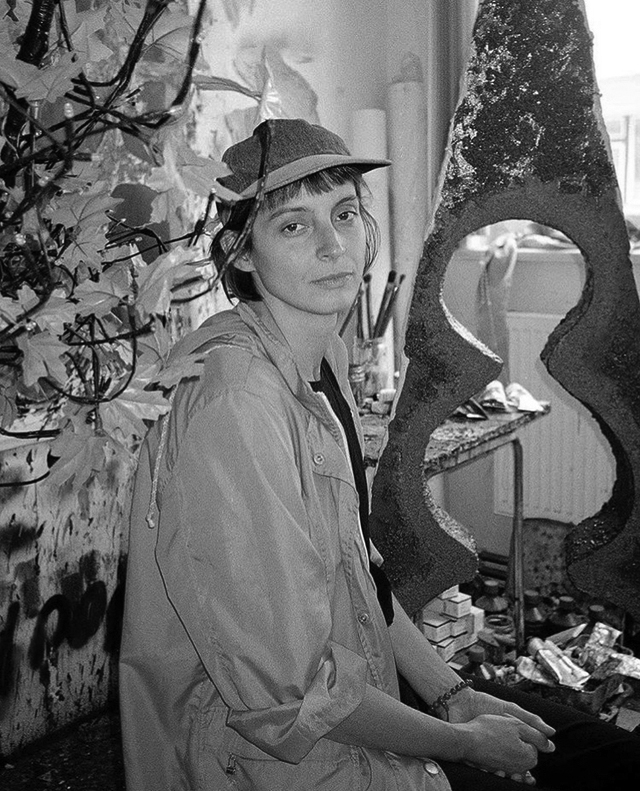 – born 1985. She graduated from the painting studio at the Faculty of Art at Ostrava University. She creates robust figurative paintings in which she progresses to abstract organic forms. Malinová works with symbolic narrative, archetypes and her own codes. Her work combines references to modernism as well as art brut, and it is always current with the themes and morphology of today

I have been devoted to art for a very long time, and I think that it has always been very intense. That doesn’t mean that I know WHY. Perhaps because I’m nervous and irritable whenever I can’t paint for a while. It is a daily activity, a habit, work, but at the same time it’s definitely not a well-worn routine. I need it to keep entertaining me. In the 10 years since I finished university, I’ve had no shortage of exhibitions. Many times it seems that I actually reject offers to show my art, but if I were to exhibit any more than I do, I would no longer feel joy in my work. Painting would probably just become an obligation, and an even greater repetition of “content and visuals” than it already is. It just wouldn’t be artistic research anymore. I am not a super-productive artist. I work slowly, take time. I am often more dissatisfied than satisfied. I think in the past two years I’ve been feeling more confident in my painting, but I don’t even know if that is what I truly want. 1

I perceive my life and work as one fluid path, of course. But art is not even a hobby for me in the conventional sense of the word. I don’t need to remember my art classes, lead discussions about art or make regular gallery visits.  At the age of 35 I finally consider myself an artist. Today it is definitely better than it was 10, 8 or 5 years ago, but it still means instability. At the same time I have enormous gratitude that I can do work that fulfills me, although it is only one of many such activities – but this one even financially sustains me.

Jiří Ptáček wrote about the rawness of the Ostrava art scene. When I studied there, it was definitely a raw, playful, “reckless” scene.  Like a constantly raised middle finger. We led entertaining debates about art or told stories over beer. Unlike Prague, we didn’t take ourselves so seriously. When I finally moved to Prague 10 years ago, I found that people here do a lot more talking and theorizing around their creations than actually making art. During the first few years, I was disappointed. It was frustrating for me that I “had to” live here in order to build my career. Back then, Prague was seen as the cradle of artists. Ostrava, even though it was more progressive, was neglected along with all the other smaller cities. But now the playful and fun art of Ostrava is also gone. With time we are all losing perspective. We are more serious in art, music, film and cooperation with others. I have also softened up.

I find inspiration in my previous work, my last image, my calm, my private spirituality and strong internal life, my sensitivity and my personal crises. My vision and my perception. History, of course. I experience true spirituality only when I am alone walking in the mountains. I know nothing more cleansing than walking in silence at heights above sea level. That is currently the only thing I can do for a few days without feeling nervous that I need to work in the art studio. It is a total reset. Spiritual independence. 2

In relation to feminism, I definitely see small changes in the status of female artists. But here in Czech, I’m not sure. For instance, collectors no longer buy only paintings but other media. But the collectors are still men. When I was around 30 and “success” had still not come, and yet all around me I saw male painters already making a living from art for a long time, I developed a theory that collectors were waiting to see whether I had children or not, whether I would stick with painting. I don’t know if my theory is correct, but this fear stays with me. Art is like modeling, isn’t it? You step out, take a pause, you’re not so visible, then you don’t have shows, you get pregnant, you pass your prime age and it’s all over? Or at least for some length of time. I wanted to write that in my environment I have known mostly passive-aggressive feminism, but actually now I’m not so sure if it hasn’t been simply more aggressive. Women seem to have pointed out the problems and gone against it with their power but not their intellect. For me, feminism on a personal level is about my equality with my partner. General economic and social equality and of course political – women are still missing there. In my work I often depict women in dialogue with men.  Sometimes in a painting, I poke fun at a man, but it is something in the details only I know about. In my work and in life, I generally seek balance between women and men. 3

Of course I believe that art must be political. The viewer should not perceive only the visual side of a piece of art. Nonetheless, it is difficult in painting, where politics have slid into caricature, descriptions and kitsch. I tried to express something about social-ecological themes at the exposition for the 2019 Jindřich Chalupecký Award finalists’ exhibition. Yet it was only a hint, as it was more about the interaction of two figures. If I can paint something that is political and simultaneously poetic, I’m satisfied. It’s impossible to escape politics, so sometimes I turn off my telephone’s social sites and internet, so I don’t have to know everything. Still, that doesn’t really work – you still know what is going on. 4

I was thinking about how people in this second phase of the pandemic began to ignore the coronavirus, more than in the first wave. The problem is still with us, but “we’ll deal with it somehow.”  People seem to think that they don’t have to deal with it, that it is for politicians to resolve. And ecology? That also has nothing to do with us! The forests here aren’t burning, they are only being destroyed by bark beetles, we have droughts off and on, and the winters are optimally warm with no snow. The politicians will deal with the issue when it finally becomes “current.” The heat in the summer of 2019 was horrible! I remember how I went out on the studio terrace and I felt like I was in a vacuum! I couldn’t breathe and I was in a panic. It was probably then that I realized that something real was happening. As a child, I loved the summer and the heat, but now that season is a nightmare. Politics should pay attention to this and focus on solving the most important issue – the future. 56

This text was written in cooperation with Eva Skopalová (2021).

Eva Skopalová – born 1991 – studied art history at the Faculty of Arts of Charles University in Prague and the theory and history of contemporary and modern art at the Academy of Arts, Architecture and Design in Prague. She completed a student exchange at L‘École des hautes études en sciences sociales in Paris, where she was tutored by Georges Didi-Huberman. She focuses on the problem of time in fine art, particularly the perspective of anachronism and its impact on art history. She recently completed a Fulbright scholarship at New York University, where she studied under Alexander Nagel. She is active as a freelance curator and art critic, where her work is based on her research in the methodology of art history.