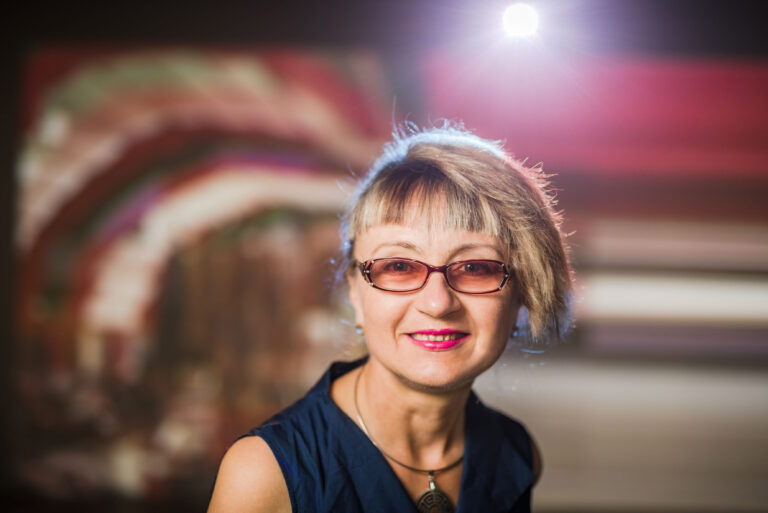 – born in 1961 in Kyiv – an architect, artist, director, curator, researcher. A pioneer of Ukrainian media art since the 1990s. Graduated from the Kyiv State Art Institute (currently, National Academy of Visual Arts and Architecture), conducted postgraduate studies in Moscow, participated in the CIES-programme (Paris) and the programme of the University of Amsterdam, Fulbright Programme researcher (USA). Took part in numerous Ukrainian and international exhibitions, residencies, film and new media festivals. Since 2003, a leading specialist of the Institute of Contemporary Art of Ukraine and author of the monograph “Interaction of architectural spaces, contemporary art and new technologies.” Since 2007, the founder of the International Festival of Social Sculpture, Kyiv. Winner of awards and prizes in the sphere of contemporary art.

Portrait of the artist by Rich Maheson.

My artistic practices include installation, video installation, film, video, media art, VR, painting, photography, performance, fashion, object, social sculpture1, public art and eco-art2. The choice of a media usually depends on a project’s idea. I do art because it is the manifestation of freedom of will, creativity, spirit with a sense of responsibility.

My projects raise questions about the role of a woman in the male world, digital totalitarianism, virtual control, neocolonialism of the technocratic world as in the project “Collider” where I combine the science of quantum physics with the theme of world cataclysms3. There, I inquire whether people are elementary particles in the system of accelerators of global forces, and whether the energy of interaction is capable of generating new meanings, new forms of thinking and new ways of living in the world.

I consider the concept of art research to be the ability to analyze, ask questions, reflect and find an appropriate art form. And if we talk about the social role of an artist, it is a function of the bare nerve which resolves the society’s pain points. Since the 1990s, I have been positioning my practice as a socio-critical one with the involvement of feminist ideas. I have been working with the topics of women’s objectification in the fashion industry, gender stereotypes in the patriarchal world, and critical thinking about the image of a woman in the post-Soviet Ukrainian society4.

My current practice is dominated by the creation of immersive environments in different countries and spaces, the project “Meta-physical time-space” is such an example5. In my viewpoint, this approach is very feminine. It is not just one artwork that, according to masculine logic, declares an “I”, but a space that embraces a visitor with a fluid plasma of a moving image, as an appeal to the idea of ​​”fluid modernity” by Zygmunt Bauman, and the experience that the audience gets during the visit and possibly alters their view of the world. Both aesthetic and ethical impulses are encoded in this experience. Ideas of concern for the fate of the world and sensitivity to the present, which are all women’s ideas, are a 21st century’s trend. A woman feels the nerve of modernity, whereas a man aims primarily at conquering the world and achieving success, so it is difficult for him to listen and perceive the vibrations of space-time.

I usually work on projects that involve different media (artworks are treated as separate outcomes), their interactions and relationships, so they build an entity. However, projects can evolve and have a continuation. The multimedia project “Collider” is such an example6, which began in Dallas in 2011, and today covers the space of historical conflicts that have shaped our world and affect the future. This project has grown into the projects “City Code”7 and in “Meta-physical space-time”8 which led to the project “Refraction of Reality”9.

When my son was 4 years old, he asked: “Mom, did you choose to be a girl yourself? You work all the time. It is better to be a boy!” Being 4 years old, he already understood how the world was structured.

There is a lack of art infrastructure in the country. It is proven by the fact that there are no state-owned Museum of Contemporary Art, Center for Contemporary Art, Center for Multimedia, Center for Photography, Center for Design, Center for Fashion, and leaves no chance for a positive experience for an artist cooperating with local art institutions. I consider my experience as a woman artist on the local stage to be fatal. That is why the majority of my most important projects were conducted in art residencies abroad: “Obvious Inevitability”, “Leader’s Favorite Toys”, “Piece of Shit”19 at Banff Center in Canada, “Virtual Sea Tower” in Brazil20, “Urban Multimedia Utopia” in Australia21, both projects in the Bauhaus Dessau, the long-term Genesis and Collider, launched in the United States, “Meta-Physical Space-Time” in Taiwan22 and others. This is a way against the circumstances, as a way to survive and succeed in art.

My experience as a mother is manifested in the long-term multimedia project “Genesis”23 (public art, video installations, photography, video, video)24 and “Genesis_2” with 3 cycles of painting: “BABY”25, “Sonography”26, “Technogenesis”27.

From the position of a curator of the International Festival of Social Sculpture, launched by me in Kyiv in 200728, I would be interested in topics that can be raised by artists to encourage interaction29, community building, emancipated sensuality.

I consider my art to be political. I work with history, science, gender, public space, the latest technology and politics. And I also feel my national identity as a woman, as a mother, and as an artist, especially given the most ignored and silenced war30 that is currently taking place in the heart of Europe and has been going on for longer than World War II.

Being an artist born in Ukraine, where there is a certain democratic tradition, overshadowed by the country’s long-standing colonial status and, consequently, violent hierarchical influences, means working with a flawed mindset.

I consider women’s and feminist art in the region of Central and Eastern Europe and in Ukraine to be of high quality. I wrote this in my articles “53rd Venice Biennale: A Special Look”31 and “Let us look at women’s art as a project of the XXI century on the example of the Venice Biennale”. These articles were published on the Art Activist platform (Minsk, 2012), which was censored after the protests in Belarus in 2020.

The text was written in collaboration with Iryna Polikarchuk (2022).