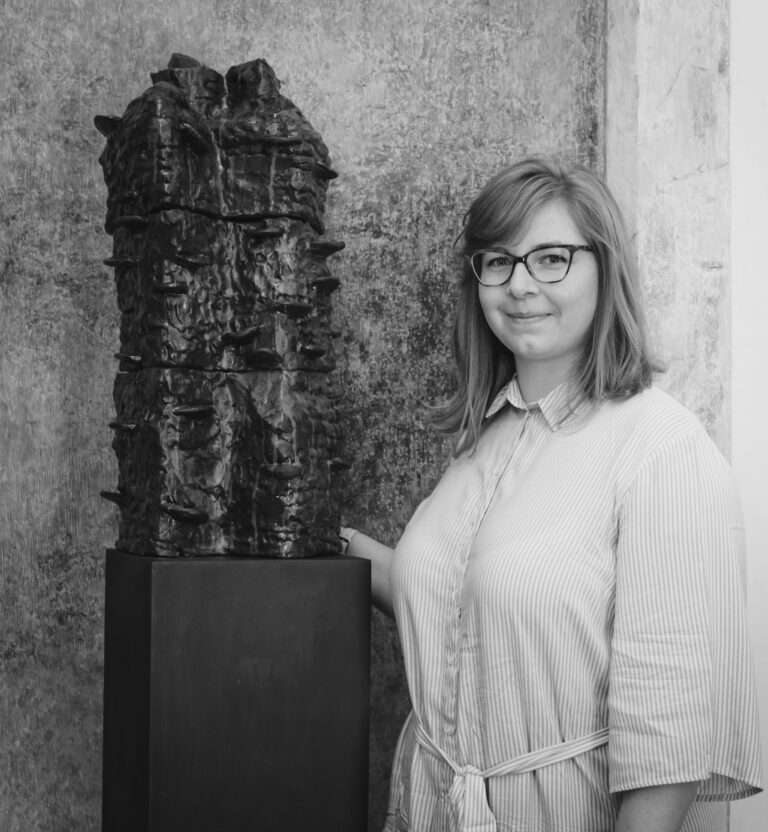 – born in 1990, Budapest, draws upon a variety of techniques, which she acquired from her studies in the printmaking department at the Hungarian University of Fine Arts. These techniques include working with oil on canvas, lithography, serigraphy as well as clay and it is the interaction of these techniques that shape her practice. Exploring and highlighting the thin border between the lush of life and the deadly rot, the atmosphere of her works can awake any inviting and repulsive feeling in the viewer. The chromatic associations she uses often offset the floral, vegetal and organic evocations summoned by the shape and volume of her sculptures. Ambivalent aesthetics constitute the backbone of her artistic production. Mira Makai lives and works in Budapest.

While making ceramic objects, I am often reminded of a childhood scene. When I was young, we went on holiday to the River Tisza, where my favourite game was to fool around with the wet sand of the riverbank. I liked to watch the watery silt first losing its sheen in my hand, then going dry, and finally displaying another of its qualities in its cracked and whitened form. This basic, fundamental experience has determined the basis of my attitude toward painting and sculpture. I like to imagine that in the prehistoric era, the birth of the first works of art might have happened the same way, and this is the feeling that I am generally looking for in my work. In my university years, after realizing numerous graphic prints and studies, I formulated a need for the creation/possession of objects. This was the main motivation behind my move to Munich to work on ceramics. I wanted to have something unique that had value in itself without being a multiple or being locked behind a frame. I immediately warmed up to ceramics, where works are enduring but really mouldable in all respects. First I planned to realize five or six designs, and their conception was preceded by a long preparation. After being confronted with the characteristics of the material and getting to know its nature, several options opened up for me. I was liberated from my fear of making mistakes and at once felt the product to be my own.

There is a vast number of variations possible in form and colour, as there is always the opportunity to incorporate new elements and combine surfaces and effects as well. When I open the door of the kiln after baking, I am both a creator and a viewer because I have to face my work as well as the contingency of the material. Being an artist is the main structure of my identity. My attitude to art also dominates the basic principles of my everyday life.

The forms used in my first sculptures (between 2014-2017) are based on a simple observation of nature. Therein reappear the treasures of natural museums that I loved to visit, such as the structure of minerals and rock, the details of prepared displays under glass and the transparent innards of amphibians in formaldehyde. My goal is to create a sort of personal Wunderkammer. What I deem important in these works is the duality manifested on the borderline between inviting, vibrant proliferation and revolting yet natural decomposition. It is in this frontier zone that I imagine these works, and pair up formal elements with colours and surfaces accordingly. The atmosphere of my works certainly can provoke both inviting and repulsive feelings in the viewer. As such, the observation of the border between the lush of life and the deadly rot is equally interesting to me. Balancing between these two poles is my daily gymnastics. I deliberately elaborate my works so as to obtain that ambivalent aesthetics, and I also do search for these values in other artworks12.

Around 2015, when I first made ceramic sculptures, I wanted to have my own little objects, small treasures. My goal was not to represent anything specifically, but to let the association of spots, prints and shapes appearing on the sculptures provoke something in the viewer. My abstract shapes gradually became the figures that I saw, discovered or perceived in them. From the very beginning, I made small “toy figures” for my own entertainment, based on my favourite animated films and videogames. These figures only fit on the shelves of my wall, even so, they are very important to me.

In early 2019, my attention turned to installations3. As an inner need of mine, I wanted to build my work around a specific theme, to add new references to my works, to bring in other possibilities for interpretation in addition to the visual world of natural history museums and palm houses. I decided to gather inspiration from the 3d environment, models and atmosphere of computer games – which I play a lot and know well from my free time – and incorporate certain of its motifs into my repertoire.

Due to the metallic colours and the rough forms I use, my large-scale installations evoke a virtual space, more precisely an imaginary cave or crypt that exists in the environment of a computer game. These installations reflect the way I play myself; I usually contemplate, look around a lot in these virtual environments and am always more interested in an object or a piece of equipment than in the main plot of the games45. This inspired me for the project entitled “dungeon & dragons”, a title that describes well my feelings about the process of creation and the sculptures that resulted from it. This project was topical to me because I found the unanimity of the conventions and expectations dictated by my society disturbing, and wanted to give a more conscious rhythm to my own life in order to get rid of the prescribed patterns. As others also expressed this need in my environment, I began to deal with social phenomena and patterns showing how the distance between the individual and reality became significant. This certainly is strengthened by the bubbles of social media, by the growing number of people watching more and more series or cartoons, by the existence of different traditional companies and subcultures, or even by the growth of the video game industry. Withdrawal in any form is possible. While each generation turns away from everyday reality in different ways, my age group is perhaps best characterized by migration to virtual space. This phenomenon is fascinating to me because it can parallel artistic activity in turning away from everyday life.

In addition to games, I always pay attention to the hottest trends, objects, phenomena, music performers, brands that are currently in the limelight, and condense my favourite patterns found during virtual or real reflections into my work. Resultantly, a character from Chinese mythology can mix with the visual language of cartoons and appear in colours rhyming with the world of the current running shoe fashion67. It gives me a lot of formal freedom to use these visual elements in an often unplanned, instinctive way, to make the fragments meet and mix spontaneously. Decoding these connections after the firing process is also a game for me and makes the surprise factor an integral part of my everyday life.

The statement was written in collaboration with curator Fruzsina Kigyós (2021).

Fruzsina Kigyós – born in 1988, a curator based in Budapest with a specialization in contemporary art. She pursued art management and art market studies, then turned towards a theoretical formation with an MA in aesthetics. She has an extensive experience working with commercial galleries, auction houses, museums, magazines and non-profit organizations in Hungary and abroad. She is committed to identifying and developing projects that will challenge the canons of contemporary art in order to reflect more accurately the multitude of voices that artistic creation entails, and to make art history more inclusive in terms of gender, age, ethnicity, geographic and cultural regions. She is the co-founder of Easttopics, a platform and hub dedicated to the contemporary art scene of Central Eastern Europe, and of Flash Show, a debuting art fair focusing on the galleries of the region. She presently acts as the deputy head of the Curatorial Department of the Ferenczy Museum Centre in Szentendre.