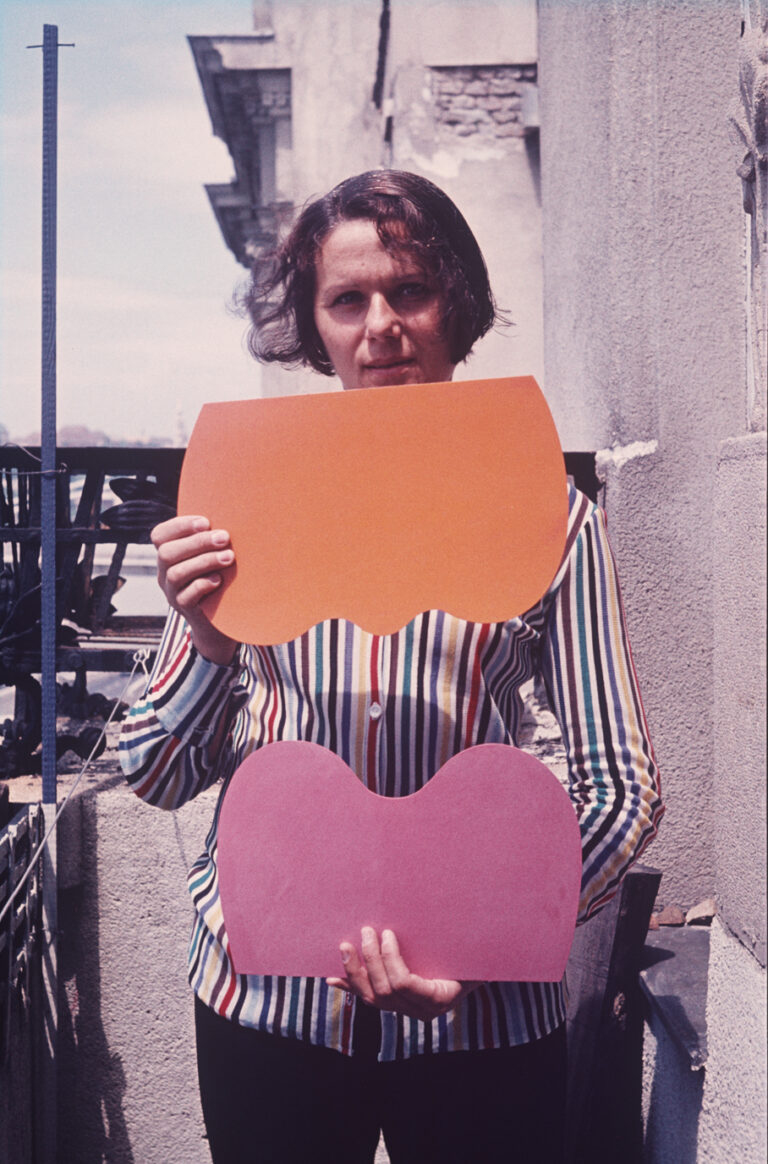 – b. 1933, Pécs, is a leading figure of the neo-avant-garde generation of artists that coalesced in the early 1960s. She had been professionally trained from childhood. Her mentor, beginning in 1946, was Ferenc Martyn, once part of the École de Paris, who returned to Hungary in the mid-40s. From him she mastered the fundamentals of drawing in the mother tongue of abstract art. In 1958, during the most oppressive years of doctrinaire socialist realism, she graduated from the fresco department at the Academy of Fine Arts in Budapest. A turning point in her career came with a stay in Italy in 1962-63. In the first half of the 60s, she began to paint in a classical modernist vein influenced by abstract painting. These were dynamic free-flow drawings of sweeping energy, restricted to a palette of three or four colours, in the Numbered Images series. These were the first manifestations of Keserü’s crystallized colour sensibility. In 1967, Keserü discovered the rustic, heart-shaped headstones of the cemetery at Balatonudvari that would become a central motif of her painting for a long while to come. – Katalin Aknai

The artist for me is not a man or a woman, but rather an omnipotent being that cannot be categorized.

I could describe the role of the artist as a member of an old religious organization that does not exist anymore. I consider this because the factors that determine the mode an artist works and exists are similarly significant and unquestionable as the rules of a religion. I, for instance, repaint a picture ten times in twenty years and never say that it is ready. What I’m doing is not a process, it is an unconscious happening that nobody else does, and there is no explanation for it. Why do I do this, that with the same energy I finish a painting I repaint it three times? Such a work is Overpainted Cancer1, recently exhibited in Seoul, that I painted in connection with my father’s death about the tragic process of cancer. It was standing there untouched for years and then in the 1980s I returned to it and overpainted it with wild abandon. I believed the 90×50 cm sized pictures I painted in the early 1970s were big. Through these images I could process the topic of the Message2. In reality those were small scale images, and now in 2022 I started to see what else is there that hasn’t been revealed.

I stick to a chaotic form of existence, the tangle is one form of expressing this34. It is partly a metaphor, but it also determines the thematic and methods of image making and a model of existence as well. It returns to the same point many times, but always differently, in an unrecognizable way. Existence and artistic practice are both repetitive. It is never reminiscent of the previous form, always comes up with new insights and new tasks. This also includes the theme of the labyrinth, which has appeared in my paintings for many decades, always in another form.

What many people still remember me for are my tombstone motif paintings56. I developed these large format images in the first decade of my professional career. Its spatiality and proportions make it harmonious and satisfying to contemplate. In 1969 I exhibited one such picture, Approach 27, at the second Iparterv show. When I took the painting to the exhibition space, László Lakner, as he saw it, said: “Ilona, what is this you are doing?” In retrospect I am very proud of that, because I don’t know what it was. There was no such thing then.

The embossing of the canvas is a genre I invented, even the words for this technique were created by me8. There was no such expression in the Hungarian language before, I am proud of it too. There are many words that existed before in Hungarian but were much less used before my practice, such as approach. I have given a new meaning to these words.

Later, when I used the motif of the tombstone in a series of prints, I gave the title “feeling” to certain pages. Until then this word was not common, and sense has a completely different meaning. Linked to this thematic and visual subject matter, a possibility opened up to use an old word in a new way. It is less definitive, so it offers many possibilities for association and encourages further research910.

I use the word research frequently in my works, it is very important to me. The titles of the chapters of my oeuvre catalogs were also named after the different stages of the research I made on colors. The research and the painting are not separated in my work. Research is the process that is realized on the canvas with various paints, materials and tools. The process of image making is the color research itself. There are no results and definitions, but this is not the point. Hidden links and context that might be in the background emerge through research. Colors appear as possibilities that our eyes and brain can enjoy, see, repeat and further shape1112. This is the result of research, not the writing of a book.

Another object of my research is the space. The embossed canvases define one and half dimensions, not three. I struggle a lot with occupying all the three dimensions. So far there are partial results, the Sound-color-space installation for instance is a spatial happening. The movement of colors and sounds and their changing is a spatial event1314.

The reason why I started to create a different kind of art than my generation is that I had a master, Ferenc Martyn, who was part of European modernism back then. When he returned to Hungary from Paris during World War II he took everything with him that he soaked up as a member of the group called Abstraction-Création. Me, as one of his students, got these ideas first hand. His oeuvre was the base where I could gain inspiration from, and that influenced my earliest works. We talked a lot with Martyn, about everything. In a sense I heard his interpretations, there was a reality in belonging to something universal which did not make things any easier. At the University of Fine Arts the education was based on naturalist and realist painting, which was kind of a recent genre of Socialist realism. I don’t mind it happening, but in reality, we knew nothing about colors and many other things. We just followed the curriculum. This is also why my research on colors became so significant, when I realized 10-15 years later how little I know about it. I started to research colors while working, exactly when I was building the images. I had the feeling, and I took it seriously, that I have to learn and try everything. That’s why after graduating, for about 5-6 years I experimented a lot, all the reflections I just encountered I incorporated in my works. I created study drawings, abstract compositions and my first, somewhat abstract paintings in which there were of course many references to Martyn’s paintings.

The first time I was traveling in Poland in 1959 I was very surprised how different the freedom and possibility of art were there, and that there was a publicity of modern artistic experiments you could see in museums and exhibition spaces. They were able to separate these things in a more fortunate way.

I don’t care about politics. It does not affect everyday life, just as it does not affect art. I don’t really know what it is, but I don’t want to have anything to do with it, and of course that also means that I am somewhat vulnerable.

It’s a miracle of God that I was born a woman, that’s how I started to do art and that’s how I’ve done it all my life. I can say that I could not have been in a better position. In Hungary, the distinction between men and women is present, in many different spheres of existence. But I have been able to do what I wanted to do all my life because no one thought it was important to pay attention to what a woman does. There was no one and no reason to negotiate with, I was free and I am now as well. Back then I wasn’t aware of this, as I am now, but in retrospect it was a great asset. Nevertheless, there was one scene at the university during an exam. Our teachers discussed our work, we were not there. There was a study by me exhibited, the painting called The Reading Girl, a painting I did not even paint at class, but in my free time. My professor, László Bencze, presented it with appreciation and said: isn’t this girl talented? And Endre Domanovszky replied: this girl? A lot has changed now, but I still say I was lucky that I wasn’t a factor.

The statement was written in collaboration with art historian Sára Vilma Nagy (2022).