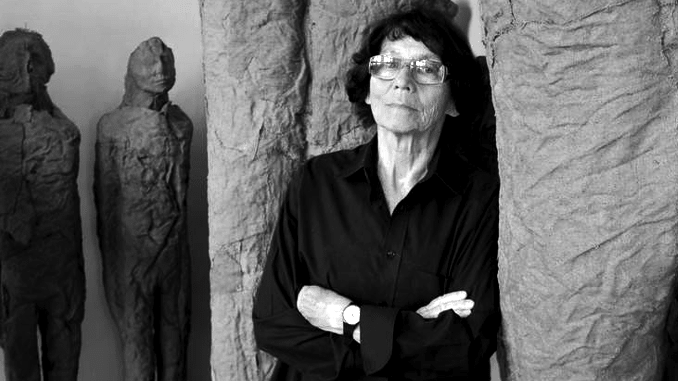 – born in 1930 in Falenty, died in 2017 in Warsaw. Sculptor, author of fabrics and installations. She studied in Sopot and at the Academy of Fine Arts in Warsaw. In 1979 she received the title of professor at the State Higher School of Fine Arts in Poznań, where she headed the Tapestry Studio from 1965 to 1990. Initially she created fabrics using untypical materials (string, sisal, horsehair). Gradual domination of texture and spatial qualities led her to relief and fabric sculpture (the so-called abacanas), from which she in turn began to construct spatial arrangements, also realized in the open air. Her works refer to natural forms, primarily the human figure. Since the 1980s she has also used wood, metal and stone in her monumental sculptures. Her works can be found in numerous collections, including the Centre George Pompidou in Paris, the Metropolitan Museum of Art in New York, the Museum of Art in Łódź, the National Museum in Warsaw, Wrocław and Poznań.

“For me, art was a bane and a support at the same time, a form of constant opposition to what is”1.

“By placing importance on the sequence of our ancestors, geneticists may be right. I for one do not at the moment feel the need to penetrate this relationship of mine. My business is to draw on my imagination, not to investigate the reasons for its complexity.”2.

“I don’t know what you critics call a creative code. I think we carry certain laws within ourselves and they are impassable to us. Sometimes they have nothing to do with the philosophy that is proclaimed, because they are unconscious and only manifest themselves in visual action. In 1968 I had to write a statement for a catalogue; it sounded like this, and I will quote excerpts: “I don’t like rules and regulations. They are the enemies of imagination. I use the weaving workshop to force it to obey my intentions. My work has always been a protest against what I found in weaving… I have never been interested in fabric with its role as a wall decoration… I was simply interested in what can be done with this fabric… When creating, I do not want to refer either to ‘fabric’ or to ‘sculpture’. What I am interested in in this work is the elimination of the “utilitarian” role of the fabric, but most of all, creating the possibility of a comprehensive contact with an object with a fleshy and flexible structure, giving the viewer the possibility to penetrate through the cracks and holes, to the furthest nooks and crannies of the interior of the composition. I am interested in the scale of tensions that arise between a shape made of rich, fleshy matter and its surroundings. I am interested in the movement and undulation of surface fabrics. I am interested in each collection of threads and ropes, its possibilities for transformation. I am interested in the course of an individual thread in space. I am not interested in the ‘practical’ utility of my work…”3.

“Commenting on one’s work by an artist is a fad. Explanations and analyses of creativity that come from interpretations of imagery are cumbersome and all too often produce an inadequate result. I always feel cornered by questions. Words are too unambiguous. I do not feel the need to reduce my work to unambiguity. Why keep explaining and explaining? I hated school because questions were posed. They cut through thought, and thought is not made up of words, it is the totality of feeling. Why turn it into words? Isn’t it enough that I answer in the language of form? After all, that’s what it’s made for, to contact the world.”4.

“In my work, planning is impossible. It is not divided into yearly periods, I cannot predict how long I will work on a given issue.”5.

“Fabric, with its specific functions, has accompanied us for centuries. Maybe that is why it is so banally perceived. With the particular stages of my work, I would like to destroy the stereotypes of our thinking and show that fabric suspended in space can represent something completely different, new. (…) With what I do, I try to define my attitude towards reality or my attitude towards the problems of contemporary man, or to create conditions for the viewer to concentrate. I am interested in the issue of people entangled in the problems of civilization built against them, in whose systems they stop coping, lose their normal mode, do not control too much tension. In these matters I consulted outstanding neurologists and psychologists at home and abroad. From these conversations and my own observations, a series of works devoted to man and his situation in modern civilization systems was created. They were created as a result of my travels in Western countries, where one can clearly see, among other things, the decreasing possibility of communication between people, their defencelessness in the face of technology and the resulting hopeless situations. That’s why I think that creating conditions for contemplation should be my counterproposal to the problems of civilization that surround us”6.

“My works grow with a slow rhythm as creations of nature, and as creations of nature are limited, and as creations of nature in time will become earth. They are created by the work of my fingers, joints, muscles. Only I am able to give them my energy and my secrets. The number of actions possible to perform with my hands is limited by the structure of my body, the rhythm of breathing, the circulation of blood. It is good to know the limits of this rhythm. The capacity of the day is different for thoughts, for decisions, for physical movement. You have to be able to reconcile them…”7.

“It is impossible today, at the end of the twentieth century, to think about art and the role of the artist as we have become accustomed to. We find ourselves in a flock of tripled humanity that multiplies further at an extraordinary rate. The expansion of thought follows: space penetration, the atomic bomb. Genetic engineering produces animals without a specific species. All of this is our everyday reality. I think in creating it you have to be really aware of the time we are living in and who we are addressing.”8.

„I don’t do it, I’m not a politician. I do art. My works are ambiguous, they appeal to our imagination. They are generally about the human condition. Policies change, and it is not politics that determines how many fears and uncertainties accompany human existence”9.

“At the Academy in Warsaw, they knew what painting was bad and what was good, I did not understand this classification. (…) The trauma was so lasting that I did not return to drawing until the 1980s. The period of my studies allowed me to formulate my own views, and unleashed a rebellion against rules and regulations, against orders and prohibitions.”10.

“I’m a loner by nature, but I live in a circle of close friends. I often say into the phone: “Ms. Abakanowicz has left” so that I can work in peace. I need great concentration to work. It is disturbed by other people’s thoughts, other people’s reactions…”11.

“I am convinced that art is influenced by the conditions in which it is created, as well as by those universal issues that every person carries with them. And here I would add, as an example, that pop art could not have been created in Poland because we were looking for objects, we had too few objects, so we did not mock them, because there were none. You couldn’t mock food because you had to queue to get it. Our experience of the crowd was also different. After all, we learned about crowds here by looking at Hitlerite and Stalinist demonstrations, or later on, demonstrations affirming other leaders and other philosophies. We learned about the reactions of the crowd, how it is manipulated, how it is bent to the needs of the moment. This comes out in my art. It’s inevitable. So these things that were born, whether in my studio or anywhere else in the world, were rooted in reality, in experience – I would say in the experience of certain things that were local”12.

“I have no idea what an ordinary life is. I know what mine is. It has developed over the years. At night, faxes come in from Japan and America. In the morning I have to answer them. Working in the so-called office, discussing what, where and when takes me several hours. This is an avalanche of various things happening in the world, in which I take part. For example, I am approached by people who want an exhibition, they provide transport, but all this has to be planned. (…) I write five or six letters a day in English. I’m a low-pressure person, I get started in the afternoon. I go to the studio for a few hours, but it is not the most pleasant time, because I fight with limitations, doubts and my own insecurity. I go to bed early, at nine. At six in the morning the alarm clock rings again and I am up. I don’t know what to call the work of an artist: an activity in constant tension or a flow of energy between living and creating. I strive to discover new things and take risks. This does not mean that I do not, for example, cook. (…) For many years I ran the house alone (…)”13.

“It’s Slavic masochism. I didn’t move out of the country precisely because it was easy to do so. It was much harder to stay here and act there. But you can’t change the country like an unfashionable dress. I am bound to Poland by the collective memory, the historical experiences of my family, and the contemporary intellectual understanding of the world. I am aware of the sacrifice of my ancestors who were taken to Siberia, killed, and deprived of their property. Besides, it seems to me that people who can mentally afford emigration risk emptiness within themselves. Communicating in the language one was born with is a great gift.”14.

“I didn’t feel like a boy. I only dreamed about it because my mother wanted a son and she had two daughters. No continuity – that’s how it was seen at the time. I wanted to respond to this complex of hers. So I ran around in short pants and had a shaved head. I was too shy for a bully. Weepy, sickly.”16.

“For me, art was a bane and a support at the same time, a form of constant opposition to what is”17.

An example of the artist’s work in the collection of the Zachęta National Gallery of Art18.

Materials were collected and edited by Ewa Mielczarek (2020).