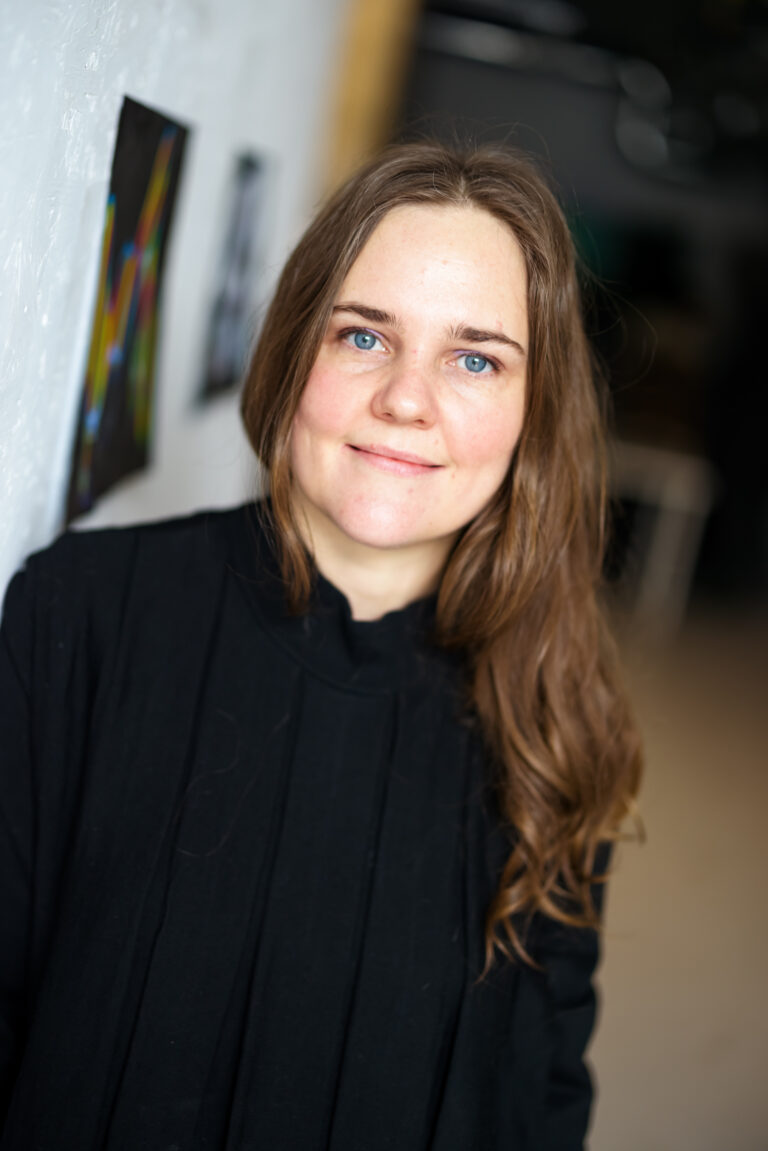 – born 1980 in Kyiv, Ukraine. A multidisciplinary artist that reconsiders the role of a painting medium and constructs complex critical statements around it. In her practice, Khomenko deconstructs narrative images and transforms paintings into objects, installations, performances, or videos. Her interest lies in comparing history and myths, revealing tools of visual manipulation. Since 2004 — a member of R.E.P. group. Co-founder of a curatorial union HUDRADA, a self-educational community based on interdisciplinary cooperation. 2009, 2011, 2013 finalist of PinchukArtCentre Prize, Kyiv. 2012 Finalist of the Kazimir Malevich Artist Award, Kyiv. An initiator, a tutor, and a programme director of the “Contemporary Art” course at Kyiv Academy of Media Arts.

If there are still wars in this world, why there cannot still be painting?

My artistic practice could be perceived as a continuous reconsideration of the role of a painting medium and academic art education since both of these topics are rooted in a rigid conservative tradition that I often question in my artworks.

Series of paintings Dacha`s Madonnas (2004)1 is my first attempt to reflect on the educational process in the Academy of Art. The programme was built so that for 10-15 years, students study the academic form of fine arts, delving into plastic anatomy and endlessly studying the nude. At the end of my studies, I thought about what could be done with this not very relevant baggage of knowledge today? The answer for me was in rough usage of the artistic instrument given to me in real everyday life by depicting this “soviet utopia on the brutal reality of working days”. This is the first series I included in my artistic practice, and this series remains crucial for me as it determined my attitude towards figurativeness in my paintings.

In my alma mater, painting is a medium deeply rooted in the post-Soviet visual tradition which, for me, is both problematic and productive. In my series Count Down (2011)2 I reduce images of Social-realistic paintings to abstract pictures by removing all narration and leaving only blurs and colours. I made copies of paintings by using images from soviet albums in order to reinforce the difference in scale and relationship between the original, printed copy and my abstract version of the artwork. This work had reference to the academic approach as I used a performative gesture by copying the work in the museum space, which is one of the traditional studying practices3.

For me, it is important to work in a collective and push the concept forward teamwise. In my practice, I always strive to create horizontal systems around myself. Therefore, I try to inspire my students to build communities. I have been leading the course for artists in a private Kyiv Academy of Media Arts for over six years. Worth mentioning that alternative art education is extremely important in Ukraine now as the formal academies, where I have studied, are deeply conservative and have an orientation on a more classical artistic heritage.

For me, teaching is in many ways a political activity that will change the artistic landscape in the next decades. It also brings me benefits and pleasure as an artist — I approach teaching in a very creative way and collaborate with my students frequently, incorporating my teaching identity into artistic practice.

In my series Lesia Khomenko and her school (2020)456, I collaborated with my students asking them to send photographs of themselves. I didn’t directly involve them in the process. While working with their portraits, I transformed my attitude towards my students: instead of analyzing them as young artists-subjects, I objectified them, relying not on my personal opinion, but solely on the images that they have sent.

For me, any public presentation of art is a political gesture. In my practice, I pay extra attention to the source of the images that I use for my paintings and often reconsider the problems of artistic gaze and position of power. The references can be my own photos when I take pictures of people asking their permission or those photos I took stealthily, in an unethical way. There may be photos found on the Internet, in books, or I ask people to provide me with their photos of their own choice. This difference allows me to manipulate images, trying on different roles — both conventionally positive and conventionally negative. Using the example of the interpretation of images, I explore how modern mechanisms of media propaganda and information wars work. In my solo show “Several Stories and Objects” (2020) I presented several works that investigate that. Paintings on biflex stretched to two chaise-longues were created from a stealthily taken photo of two Ukrainian and Russian tourists arguing on the Crimea issue in Turkey7. The second part of the project presented several former Crimean residents, who have difficulties coming to their homes, impersonating several Russian cultural figures, who cannot visit Ukraine, after them performing in Crimea8. These figures on the canvas are at the same time the heroes of opposite warring parts. Here I am mixing the opposites, as well as the use of the principle of working with a living model, which in the tradition of Socialist Realism was often used to create a genre of historical painting. The whole exhibition presents its own dramaturgy, telling a story about the political conflict around Crimea in chapters, by taking a glimpse at personal stories of particular persons.

In my last project Covert Surveillance (2021)910, I used photos of soldiers that I stealthily took while stalking them through the window of my studio, which is located near one of the military units. By objectifying soldiers` bodies, I am dehumanizing them and reconsider the role of the artist`s gaze by comparing it to the shooter`s gaze. I paint this artwork in several layers: the first layer is an ecorche, then a soldier on the transparent net and then the foliage overlapping soldiers` bodies. This artwork is deconstructing the war by studying the anatomies and literally penetrating the body of the soldier.

Contemporary painting has significantly transformed from the classical idea of painting. Thus I am leaving socialist realism and chose to work with biflex material, which lets me draw a figure and then deform and distort it while stretching. This allows me to transform one of my favourite processes of mounting canvas onto a frame into the main ‘sense creative’ part since it becomes an instrument in the deformation of depicted figures. I have two parallel strategies in working with painting: painting as an object and a figurative image. A painting as an object is always connected to space where it appears: an object can yield to the space, or vice versa, “gather” it together to form it in a new way. The figurative paintings, which I create, are always susceptible to deconstruction11.

For me, consistently working with painting is about processuality, about the fact that there are very clear material parameters, they are well studied and described — this creates a certain severity, stimulates the imagination, and trains mindfulness.

The final version of the statement was edited in collaboration with Valeria Sсhiller (2022).

Valeria Schiller — born 1994. Art historian, curator, author and editor of texts. From 2016 to 2018 she had been working in the archive of the PinchukArtCentre`s Research Platform, in 2019 — as a Junior Curator of the PinchukArtCentre and a Curatorial Team Member at the Babyn Yar Holocaust Memorial Centre. Since 2019 she has been teaching art history at the Kyiv Academy of Media Arts. Currently, she works at the online media about contemporary art artslooker.com as an editor-in-chief.