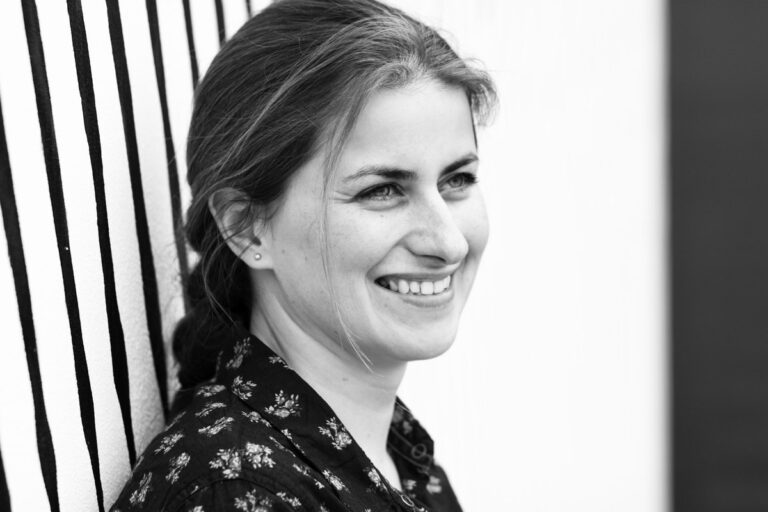 – born 1977. Kateřina Šedá is a czech artist whose work utilizes social architecture. Between 1999 and 2005, she studied in Prague at the Academy of Fine Arts with Professor Vladimír Kokolia. In her work, Šedá focuses on socially engaged events, often employing dozens or hundreds of people who have nothing to do with art. These events take place primarily in village centers or on city streets. The purpose of experimenting with interpersonal relationships is to bring those involved out of their stereotypes or social isolation. Šedá tries to induce lasting changes in the participants’ behavior by means of their own (elicited) activity and by finding new uses for everyday resources.

I engage primarily with the question of how to turn an obstacle between people into a vehicle of connection that can bring them closer to each other. In addition, my way of working is to have the inhabitants themselves take part in the transformation, which is always a demanding process, as in principle it calls up a lot of conflicts. People often find themselves in situations that they don’t understand. My task is to patiently explain the point of the matter and to become a kind of a guide to their transformation. Their criticism or insults often have no relation to me or to the meaning of a specific action, but are projections of their own problems, previous conflicts  or unfulfilled ambitions. For me, however, it is essential to stay firm, not give in to the pressure of negation and not to yield to such attitudes. It’s a complicated process with a different path of development in each setting, but it has paid off many times – the strongest opponents have eventually become the most enthusiastic fans.

In my opinion, an artist’s main role is to teach society how to see things that are not usually visible. Each artist does so using completely individual means, and to this day I still do not  understand the ongoing disputes concerning the degree of importance of different types of expression. At the end of the day, it doesn’t matter whether you are a painter, sculptor or activist, whether you use a brush or the principle of participation. What matters is how convincingly you are able to pass on your worldview to others and thus enrich theirs.

I am most interested in daily life, human behavior and the barriers that prevent people from communicating clearly and reaching agreement. I have basically used this way of working (identifying barriers between people) since my childhood, when I did my first actions, but I couldn’t name it precisely. Gradually, I began to notice that what links my individual projects is my attempt to transform barriers into bridges. Sometimes the barrier takes the form of a fence, at other times it may be a sentence repeated continually. People usually come together on the basis of common ideas, interests and friends, but I do it the other way around. For example, when I was organizing The Biggest Czechoslovak Date, I was looking for a problem that prevented people from finding new relationships – I was not seeking for a fun activity they might do together1. As the “unresolved past” turned out to be the biggest drawback, I introduced the participants to one another through their previous relationships. In this way, I managed to connect those who would have never met otherwise2.

It’s difficult to choose which of my works is most representative of me, because each of my projects has something specific and involves a different aspect of my work. Perhaps I might speak of my first major event THERE IS NOTHING THERE in 2003, in which I involved all (315) of the inhabitants of the Ponětovice village, without knowing a single one of them. I distributed a questionnaire to the inhabitants3. Its results showed that most families spent their Saturdays doing similar activities. My second finding was that the villagers harbored a certain skepticism: they thought that all the important things took place in cities (when talking about their village, they would say “there’s nothing here”). My task was to put their everyday life on display. Based on the questionnaire, I formulated an obligatory program for Saturday, 5 May 2003 – a Schedule for a Day4. I tried to convince all of the Ponětovice inhabitants to follow it. So everyone got up out of bed, went shopping (everyone bought the same thing at a symbolic, sponsored price), swept their walkways, had a lunch of tomato sauce and dumplings, went out to have a beer, and then all turned out their lights at the same time. This simple game helped show people that big things could happen in a small town too: you just have to do them together. The success of the event kick-started me as a student and gave me the courage to continue in that direction.

Research is absolutely essential in my work and I use it every time. This introductory phase of creative work often takes me quite a long time, sometimes up to a year. From the outside, my idea may seem banal, but there is usually a long and complicated path to the final project. The road is always full of mistakes and shortcuts with dead ends, but when I find a solution, I no longer doubt it. There is no space for that, because the subsequent implementation is usually quite demanding from the production point of view, and in the field I have to be convincing. If I were in doubt, I would hardly manage to complete large-scale projects.

My research often includes introductory communication with the local people, and this is a specific chapter. Most of the time, I try to do this phase myself, because I am convinced that no one else can respond immediately to the criticism and reproach that sometimes appear. It is an exhausting process and there really aren’t many people who would enjoy constantly entering conflicts in the field. On the other hand, I have had to compromise a lot over time,  whether in places where I addressed huge groups of people (25,000) and it was impossible for me to knock on every door myself, or where I don’t speak the language. In those cases, the translator is always the key person, not just for quality translation, but he or she must also be socially competent. In such places, I sometimes have a connection – it may be a local activist, sometimes an eager official or a curator – who helps me address the community in their language under my leadership5.

In my private life, I have so far been lucky with strong women (my mother, grandmother, and I have two daughters) and principled men (my father, my husband), so I didn’t deal with inequality much as a child. Gradually, I began to notice it during my studies, but then I was lucky to have great teachers and as a student I did not feel any inferiority. It was only after graduation that I began to see unequal positions and power pressure. However, I am not one of the artists who set this as the main subject of their work, as I have always been much more involved with subjects like the aging of the population, mutual care and a closed society.

I believe that the epidemic has further added to the importance of these subjects. People have suddenly found out how difficult it is to spend entire days with their families, because we are used to living our single lives at work, in offices, at schools, and we don’t get together until the evening. In addition, the reality of elderly people’s pastime was brutally exposed: they were wandering the shops in the pandemic so that they would not have to stay home alone. It has become even more obvious that there are very few joint activities that would satisfy all of the generations, that there is not much talk about meeting all expectations. In my opinion, once culture is enlivened again, that is where we need to focus our attention. In school assignments, yearly school projects, calls for grants and public competitions. In bachelor, diploma and doctoral theses as well as in practice.

Inequalities between female and male artists are certainly significant. For women, it is especially difficult to combine family life and raising children with their own work. On the other hand, the opportunity and ability to give birth to a child is a gift, and I would not like to claim it as an obstacle that I have to overcome in my life. I often feel that I have to work three times more than men to manage raising my children without regret, and at the same time for my work not to become something decorative. But that’s just the way it is and I am grateful for the chance to do it.

This text was written by Kateřina Šedá in collaboration with Jolanta Nowaczyk (2021).