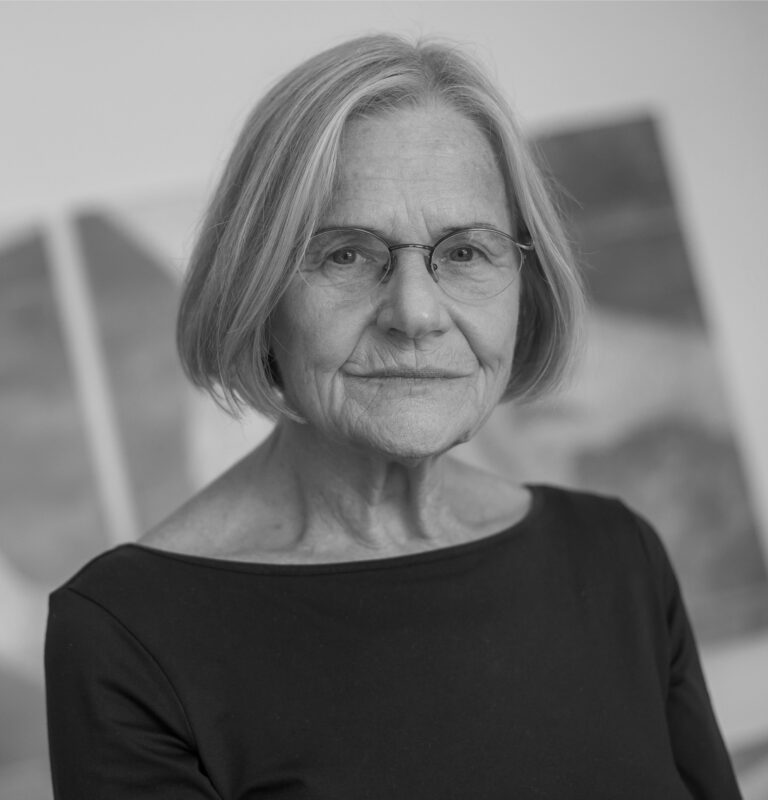 – born in 1946, a Kossuth-prize winning Hungarian textile artist. She graduated from the weaving department of the Hungarian University of Applied Arts in 1974. She earned her DLA degree in 2002 and habilitated in 2004. Between 1987 and 1989 she lived in New York City. The beginning of her career coincided with the establishment of the Textile Art Workshop in Velem, Hungary, of which she was one of the first participants. The aim of the workshop was to renew the genre of textile art. From the 1980s the conceptual style and the use of soft materials became characteristic of her works, while she was among the first artists in the Hungarian art scene who applied the female point of view in her works. She is intrigued by finding a direct relation to nature and working with organic materials. She is interested in questions of history and the personal and collective memory, from a consistent worldview of a God seeker. Each of her works is a prayer for the vulnerable. Her materials, forms and objects are only serving her ideas. Searching for connection with transcendence has become a defining feature of her works. Beyond constantly experimenting with materials, the media of installation, video and performance play a significant role in her artistic practice.

The experimental Textile Art Workshop was founded in 1975, in a small village called Velem, in Vas county, the Western part of Hungary. As a freshly graduated textile student, I had the opportunity to work here. This start was significant in the further development of my career. The workshop aimed to renew the genre of textile art. It was possible to do so, as the activity of the workshop was beyond the focus of socialist political power. The female point of view was not declared in its program – though the core of the workshop was formed by women – only experimenting with new materials and techniques (for me these were the organic materials, handmade paper then later line and glass fibre). In addition, we started to create our own identity instinctively. Due to the general lack of information, without theoretical knowledge, we formulated similar problems to our Western colleagues, while working with consciously used, traditional female textile techniques as well.

I started to move away from experimental textile art in 1980, with my installation called Island1, exhibited at the Pécs Gallery. I presented the experience of attacking people in connection with the shocking events of the Russian-Afghan war that was taking place at the time, and which was often in the news. I built an island covered with white canvas, surrounded by water. Life-size people were painted on the canvas. The visitors of the exhibition had to cross these bodies in order to move in the space.

In 1984 I had the opportunity to realize a solo show in Kőszeg, a small town in Western Hungary, as I won the Biennial of Tapestry and Textile Art in Szombathely. From this exhibition onwards, I call my works Station, numbering them in chronological order, until 2000. I created seven installations made of cellulose panels, supported with metal grids2. I put texts written on silk in them, I sowed wheat in the cellulose, which sprouted. With the rusting wire I wanted to depict the notion of passing. This installation was the first step in finding my own path.

I developed the idea of my exhibition in Kőszeg at the textile art shows I participated at the Arts Décoratifs in Paris, at the Künstlerhaus in Graz3 and at Helikon Gallery as well, where I arranged psalms and my own texts written in columns on silk. As the sowed wheat was growing, it always dropped a layer of paper and the hidden text became more and more visible. I presented the 30 m long version of this work – as a quasi-roll of the Bible – at the International Triennial of Tapestry in Łódź4.

Then, because of the work of my husband, architect Tamás Nagy, we spent three years in New York City, which was a very important period in the development of my artistic vision. I collaborated with Sandra Gering Gallery in New York. When we returned to Hungary, the regime change had already taken place and brought a lot of tension. At the time I still had an ongoing invitation to the Art in General Gallery, but I knew that I had to deal with all the problems at home. In this process I have explored beef intestines, the material that made me able to show all the things that happen inside a person, and all the imprints and damages made by frustration. I am glad that I studied at the University of Applied Arts because I was never afraid of experimenting with materials – including the “cheap” and “inferior” ones.

For this exhibition I made a huge drum, which is traditionally used for connecting dimensions5. Moving forward with this idea, but using the same material I created the first Spools6 that got exhibited worldwide. I call them soul seeds, but most often, babies: first of all, I create the form that I cover with intestines, and then I caress them as if there were children or souls inside them.

It was important for me that I transfer a disgusting material, the intestines, into an ethereal quality of beauty. My work called Station No. 28 was realized as part of the series of exhibitions titled Trial by Water7, which was an attempt to represent the waves of art by women in the 1990s. I made a 12 m long metal table for this show and I placed metal and glass trays to accommodate the altar bread (wafers) and loaves of bread baked by me.

At that time some leftover wafers were on my table for a long time. The wafers were made by nuns who cut circles from the bread which will be sanctified and used in the church during the mass. A perforated circle of diameter 30 cm remained. In this work I was interested in the meaning of the missing holes and how they can be filled. From this time, wafer became a part of my work as a material.

Instead of all the fears and doubts in life, I focused on the potential of healing in my 1997 installation entitled Station 328. I recalled the pain of self-sacrifice and giving birth through stitches, needles, rust, concentrated lights and operating tables, showing the fourteen stations of the multi layered beef tripe, stretched on glass. I tried to reproduce the original, sacred function of the Wendelinskapelle9 in Stuttgart. I placed ten glass benches in the space, engraved on them the Ten Commandments, and placed wafers on their surface, beneath them were steel plates as carpets. On the wall there was a video, like an altarpiece, in which I washed the guts in the constantly flowing, clean water.

My series called Innocenti10 was based on a war incident against children. I enlarged my photos about the medallions of the Ospedale degli Innocenti, and used them as press images. I placed wafers on them, and covered them with clean, white, soft intestines to protect them.

In the early 1990s I came across my grandfather’s letters he wrote to his family from the front of World War I. Shortly after he returned home, he died and left behind three orphans, a wife and a prosperous hat factory (he delivered hats in the whole Austro-Hungarian Empire).

I inherited his letters and the models of the hats, which I use in my works that deal with their sufferings. In my first video installation titled Have Mercy on Me11, I say a monotonous prayer for them, in the framework of a pilgrimage, where the models of the hats are impersonated. In my video titled S.O.S.12 I presented the hat models floating in the sea. In this work, I expanded the Christian point of view, the horizon of forgetfulness and forgiveness and completed it with statements that are valid in all religions. I made imprints of the models as well, that I used in my video Anima Nostra: I walk among them, as if they were dead souls13.

I never wanted to live up to the ideals of men, it was always in my mind that I am a woman. For me it is a very favourable situation. I can work with the things that “put” me together, and this includes the role of being a mother. The art scene finds it hard to accept that artists – especially women – have a private life or a family. When I was teaching the most important aspect was to increase the self-confidence of my students, as most of them were women. Living in New York I followed the feminist movements and I agreed with the actions of the Guerilla Girls who fought for the representation of women in art that was undeservedly low at that time. In 1978 I was also an active participant of fighting for the equality of women. That is how I took part in the first Feminist Conference in Belgrade together with Orsolya Drozdik and Judit Kele, where we exhibited a series of photographs about ourselves in which we appeared in typical female roles. This collaboration did not last long because of the different ways of our lives.

The final version of this statement was created in collaboration with art historian Kata Balázs (2021).

Kata Balázs is an art historian living in Budapest. She graduated from both departments of Hungarian and Art History studies at ELTE University in Budapest. Since 2007, she has conceived and contributed to numerous publications mainly focusing on avant-garde and neo-avant-garde art, held a teaching position at the University of Theater and Film Arts in Budapest, the Visart Academy of Arts, the Károly Eszterházy University of Eger, worked at Ludwig Museum Budapest and as a young research fellow at the Art History Research Institute of the Hungarian Academy of Sciences. In 2020, she joined acb ResearchLab as researcher.