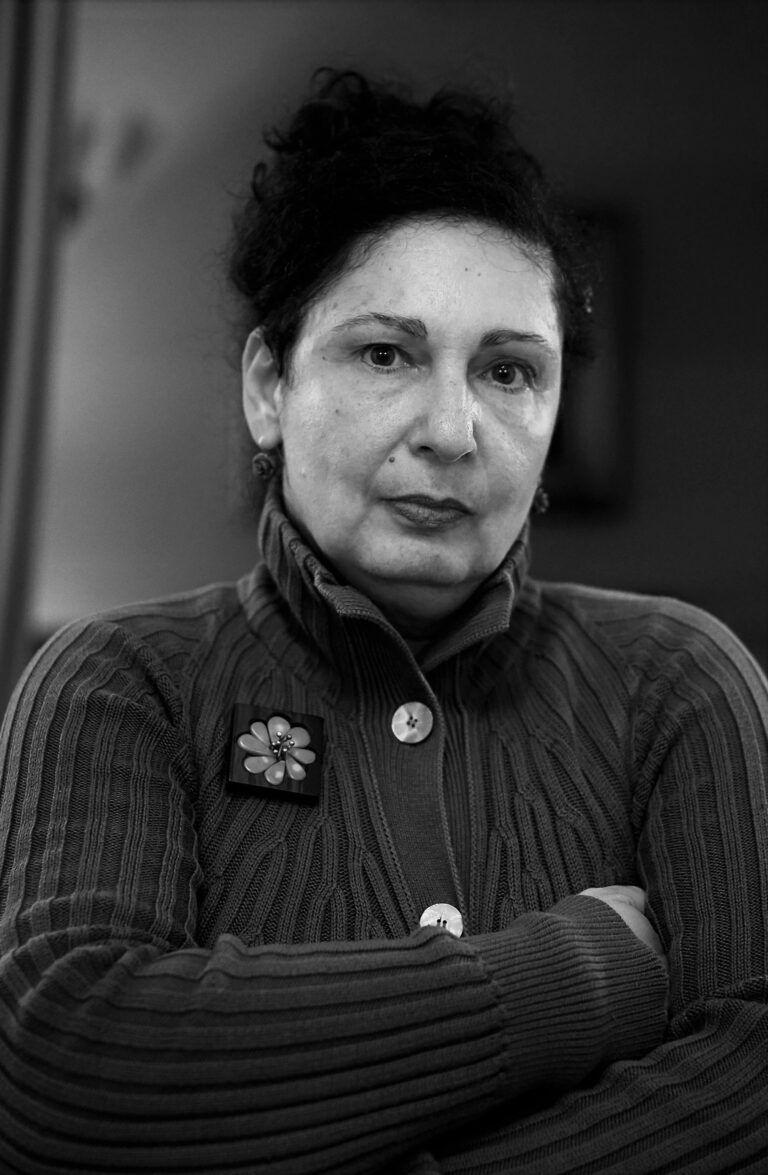 – born 1966, graduated in Drawing and Visual Education from the University of Pécs, then from the Intermedia Department of the Hungarian University of Fine Arts. She is a founding member of the HINTS Institute for Public Art active between 2000 and 2010. She completed her doctoral studied at the Hungarian University of Fine Arts in 2020. Her collection of texts entitled Libertatia studies temporary, independent areas of culture and explores the social background of piracy and punk. Her art pedagogical activities embrace different generations, from primary schools to universities. She participated in the accreditation process of several university art courses (METU, MOME, Károli Gáspár Reformed University). Since 2020, she is a lecturer at Eötvös Loránd University – Savaria University Center. As an artist, she has participated in numerous group and solo exhibitions since the 1990s, and her works can be found in both private and public collections.

I graduated from a drama school so the stage and performing became a part of my life. Though I am also a seamstress and a leatherworker by profession, later I graduated from university as a visual culture educator and an intermedia artist. I am an artist, and all these elements were built in my practice. From the very beginning I was interested in the influence of the creative process. I found a very good example for this in design, when I worked at the 1st of May Clothing Factory (1985-1991), while I was preparing for my artistic career. I often asked the designers in the factory why they work here anonymously instead of being artists. I learned from them that a well-designed, wearable coat can change the way the streets look like. If a coat will be mass-produced, it becomes a ‘sign’ and a new colour or style adds a new meaning to it. Compared to the series of products, a unique piece has much less efficiency. I tried to incorporate this systematic design thinking into art. I like to merge production and reproduction with the artwork and I am waiting for the moment when my work returns as an urban ‘sign’. That is what happened when I designed stickers in 2001 and 2002, published CDs and a few years ago when I started to create coloring books1 related to youth culture and subcultures, especially connected to David Bowie’s work. This is typical for my recycling projects using sewing machines2345, where I can work together with the audience in order to ‘produce’ the most out of textile banners that cannot be recycled. I am a fan of online live broadcasts that can be watched by a lot of people at the same time.

I was always looking for content that can be prefigured by everyone, these are mundane or practical topics, such as a grocery bag67, canning jam89101112, pancakes, soup or cooking a seasonal meal. In this process I use the elements of collective memory such as breast milk13, cakes associated with memories or embroidered wall hangings. This way the audience becomes my artistic collaborator as they know exactly what we are doing together. These do not officially belong to art, but for sure they evoke emotions. I frequently mixed and remixed all these with pop music and dj culture: I sang the recipe of a cake (as recipes can interpreted as musical notations) and I worked together with dj Cadik who taught me a lot about the mechanism of parties and the synchronicity of people that I connected with the synthesizing role of the housewife who is constantly mixes her function as a synchronizer of the family and the community. This is what my project Every Housewife is a Dj1415 is about. I even built my kitchen table which I can simultaneously use for playing vinyls and cooking.

All of my works are autobiographical in a way, even when the specific piece is fictional such as my wall hangings16 or when I play an imaginary role behind a kitchen table as a dj. Both of them are self-reflective processes, just from a different point of view. I am the protagonist of my works and I deal with my real and imaginary roles in my family, in my environment, my body and my constant struggles with my body hair or with the topic of longing, which is far from everyday life, space and time17. I can express this the most through my wall hangings and painted plates. These are the forms in which I can care about myself and my problems, that hopefully help other women as well: for example waxing the upper lip is especially a female issue1819. My public ‘appearances’ are somewhat else, because in these I think about social issues that bother me. I  try to do something against poverty and waste, and I try to change our consumer lifestyle by showing methods for surviving and recycling. Being an adult and an artist is adventurous and hard, so for me it is all-important to reflect on social circumstances and to research the methods of sustainability.

In my career the tranquil, balanced existence as an artist was never typical, I do not have an atelier, I am not represented by a gallery who would deal with my works, as I do not paint or draw. The essence of my works is not marketability, I rather follow the logic of objet trouvé or ready made and apply ‘méthode trouvée’20. For the audience it is hard to interpret my topics and techniques as art, mainly because they are not made in the artistic realm. At the moment in Hungary there are just a few possibilities to organize events in art institutions that are beyond traditional genres, even if the topic of the exhibition could validate such an action. I am much more motivated by producing a series of objects or giving a public workshop for those who cannot make it to an exhibition, than by creating artworks. I consider my ‘autonomous’ artworks – my plates, embroidery, clothes or grocery bags – as by-products of my socially engaged work. Meals are so good because there is no artwork left after making them, though in my current project I handle leftover food as a relic. I see it as an artwork, though it is much more about the food crisis, about distribution issues and wasteful lifestyle.

I think a lot about why it is so hard for me to create artworks and why I like processes and community work much better. Why is it hard for me to be a ‘pop star’ when the urge of it is in the background of all my works? I think that my parent’s trauma of World War II plays a significant role in this. Their philosophy was conformity and hiding. They were not happy that I am an extrovert, there were problems because of my extreme clothes and behaviour at home and in school as well. I could only react to these with rebelling so I was expelled from schools all the time. If I review my career I see that an exact sign is missing and because of my experiences, my projects became hiding. They are in the realm of ‘non-art-art’. I frequently find myself in the role of the backing vocalist or the caretaker, and I believe in the role of the teacher as a summary of both. Of course it is also an important artistic career in which the artist is never alone, and the artworks are being activated by the relation with the audience and they disappear without any trace most of the time.

I regularly encounter the dilemma of whether there is women art and what is the point of it. I have never thought it is important to note that I work on projects as a female artist as for example in the genre of tapestry wall hanging a ‘male artist’ preceded me. Sándor Rácmolnár did not embroider his wall hangings himself, but he did feel a medium which is traditionally connected to women. Most of the famous chefs are men, and in fact among the artists who approached the fields of art and food are a lot of men, such as Marinetti, Daniel Spoerri or Rirkrit Tiravanija. In Hungary just a few male artists cook or bake as a part of an exhibition, but I need to mention Miklós Mécs and Dániel Bozzai.

I do not consider myself a woman artist, I just use these media and I follow fellow artists in these areas. It is not very important for me to deal with recent women issues, such as the me too movement or general social references of being a woman. Still I gave lectures on gender in 2005 and in 2006 at the Moholy-Nagy University of Art and Design. Between 2000 and 2010 we were working on projects dealing with the gender pay gap with my association called HINTS Institute for Public Art. Moreover we also collaborated with the patchwork sewing club of the retired women workers of the Iron Factory in Dunaújváros. The role of women gets even more significant throughout the world, in art education there are far more women than men and from high school education men almost completely disappeared. The fate of women in art will not depend on ‘male artists’ in the future.

The statement was written in collaboration with art historian Kata Balázs (2020).