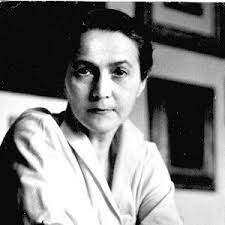 – born in 1909 Bratislava, died in 2005 Liptovský Mikuláš. Ester M. Šimerová studied at the Académie Julian and Alexandra Exter’s private school in Paris (1927 – 1932). She devoted herself to painting, drawing, collage, creation of objects – cameos, design for monumental works, for a while also to scenography and journalism. She also designed the interior of her apartment in Bratislava’s Avion.

Ester M.-Šimerová was born as Ester Fridriková, during her first marriage her full name was Ester Fridriková-Šimerová and after the second wedding and to this day she is probably best known as Ester Šimerová-Martinčeková. Her long-time friend, art historian Ľudmila Peterajová, named her monograph Ester M. Šimerová. In a letter from 1972 Šimerová worte: “As for my three names, why not miss Martinčeková? After all, neither Medvecká-Belanová nor Špannerová-Nemčíková is written, only my husband’s name has stuck with me.”1. The life of this artist, born in Bratislava, is full of dramas against the background of changing political regimes, which have repeatedly cruelly affected her personal life.

Although, according to Peterajová, Šimerová did not like to talk about her personal life, based on the memories of her contemporaries, her letters, and statements, we can partially reconstruct Šimerová’s view not only of art, its forms, and tasks, but also of itself. It is not a view that the author or her monographer (or I) would describe as feminist, but the healthy self-confidence of an educated artist can be deduced from it. For example, she talks about her meeting with the older surrealist painter Josef Šíma in Prague: “At that time, Šíma knew very little about painting, in the very intellectual sense of the word, and he condemned my efforts to acquire knowledge as nonsense. However, I was passionate about it and I didn’t care if the older painter had different opinions.“2.

In connection with her studies in interwar Paris, Šimerová emphasized that it was mainly training of a Russian exile, a cubofuturist painter Alexandra Exter (and not better-known Fernando Legér, who was also her teacher for a while). Despite her friendship with the Josef Šíma, she was discouraged from surrealism by psychological restraints. She preferred to have everything under control – from her consciousness to composition. So psychic automatism was strange to her, but she mastered some formal principles of the composition of the painting3. Her thinking was influenced mainly by Cubism, which according to her “was the way back to life, because academic art did not notice that the world was covered with asphalt.“4. Her views on mixing art and politics illustrate her statements over the years, for example in an interview with Dr. Jaroslav Zatloukal in newspapers Slovenský denník from 1934, where she stated: “I think that modern art has a primarily artistic function. The social idea finds much better promotional means in photomontage, film, radio, theater and literature.“5.

Later, in response to the art events of the time in Western Europe, she remarked ironically in 1966 from her position in the socialist Eastern Bloc, where political engagement was requisite as a condition of a good artistic practice: “Contemporary young people (at least they were young a year ago) are 20-30 years old (Arroyo, Grinberg, Recalcati etc.). Judging by the reproductions in the magazine l’Oeil, they brought absolutely nothing new. It is re-surrealism, re-action painting, re-pop. However, it can be learned from the text that their benefit is access to these means of expression. Everyone is politically engaged. The result is re-socialistic realism, from which the eyes of our political actors would pass…”6. Even in her work, mainly from the 1950s and 1970s, we find works with engaged themes – images of workers or doves of peace7.  Especially in the 1950s, her work was influenced by a pragmatic struggle with everyday duties and destiny of life outside the center, in the village. In a letter to Emília Juricová from 1952, she writes: “I steal time for painting from cooking and time for cooking and other work I steal from painting…When I finally sit outside with that brush in my hand, I’m glad I’m alive and I paint, hungry for everything I see, and I don´t give a damn about all aesthetic problems …“8.

Šimerová’s work underwent several changes, which were related to the places of her work and the limitations of the possibilities of artistic creation, more or less burdened with dogmas and existential fears. In 1937, she was described by Slovak contemporary critics, of course, typically by generic masculine, as “a brave pioneer, an uncompromising believer in modern art.“9. During the Second World War, when she lived with her first husband František Šimer (executed in Germany for helping Czechoslovak paratroopers from England) in the Protectorate of Bohemia and Moravia, her work was, on the basis of an exhibition in Pilsen in 1941, marked as entartete Kunst. Šimerová said:“For an artist, the word style means his artistic character. This one can’t naturally get from the outside. If he has it, he has it for life. All his work must be marked by this style. It can change the expression for certain topics. However, all the artistic expressions they choose during their lives will be uniform in style.”10. After returning to Bratislava, she became a member of the Group of Fine Artists of August 29 (Skupina výtvarných umelcov 29. augusta) and actively participated in cultural life. After (forced) moving to Liptov in her fifty years together with his second husband, amateur photographer and lawyer Martin Martinček, the forests in which they lived – from supremely landscape depictions to more abstract interpretations, became an important subject for her11. The 1960s brought rehabilitation of her work from the 1930s (mainly thanks to the exhibition project of Karol Vaculík and Ľudmila Peterajová Generation 1909: Conscience of the Epoch in the Slovak National Gallery, 1964), but also experiments with collage, which she often carried out in painting – she searched for foreign magazines like Vogue because of the quality of the print12.

At the same time, she again tried to theoretically reflect on the process and results of her work: “I finally realized the difference in today’s modern artistic composition compared to classics until 1930s and after this period: the first is based on a compositional scaffolding on which to build a painting. On the second, the composition is a swirl of individual elements around the invisible center.13.” In the 1970s, Šimerová looked for ways to portray her contemporaries, she sought a solution in crowds, a mass of faceless people: “Today’s man looks more literary dramatic than artistic. The more I try to see him, the more I hear him. He keeps going, stopping only for a short while. I am not able to capture his matter as if he did not have it, it is a silhouette in motion.”14. According to her own words, her return to the figure was not easy – mainly because of what she experienced during the war in the Protectorate of Bohemia and Moravia and later in the 1950s in Liptovská Ondrašová15. Chess, music, playing cards, gardens, flowers and still lifes later become the subject of her compositions. Due to health problems she completely stopped to create in 1994.

Text was written by Miroslava Urbanová.