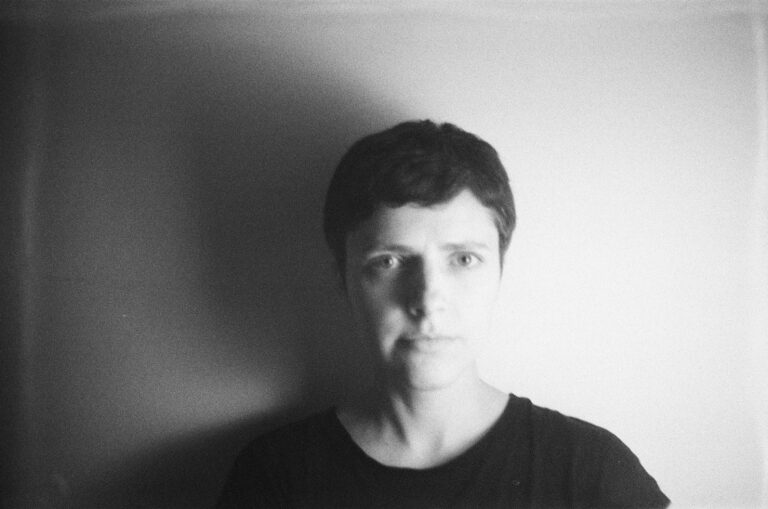 – born in 1986, Dnipro. She studied painting at the National Academy of Fine Arts and Architecture from 2004–2010. In 2020, as a recipient of the Gaude Polonia scholarship, she worked with Professor Mirosław Bałka in the media art department at the Academy of Fine Arts in Warsaw. In 2021 she began a residency at the Jan Van Eyck Academie for Art, Design and Reflection. Zvyagintseva received the PinchukArtCentre Prize in 2018. Since 2010 she has been a member of the curatorial group Hudrada.
Zvyagintseva works with themes like the body, paths, useless actions and small gestures. Her artwork interweaves drawing in various forms and transmedial variations like sculpture, installation, video and painting.mShe lives and works in Kyiv.

I am in my works.

In an interview in 2019, somehow I said that my artworks are autobiographical. We didn’t develop this idea further in the interview, as it seemed obvious. Later I was asked on several occasions to explain in more detail, but I never could, since this realization was new and very personal. It was just like with the subjects I work with: there is something small, hardly perceptible, that’s difficult to describe. I try to capture it and show it, using the instruments of art. Now I will try to expand on the subject of my works as autobiographical, although I find this both captivating and scary.

I never considered art an instrument for self-expression. It seemed that an artist should not speak about their own “I” but give voice to the other. Not speak for others but observe carefully through her own artist’s eye and reveal what was seen. I think that at first I would hide behind my artworks. I was sure that I was giving another—but not myself—a voice. For example, I’m saying that the machinery of justice works against the individual person and devours the life time of all its participants, while at the same time the place of the courtroom becomes cozy and in some sense familiar1. And here I am drawing people performing everyday labor (washing the dishes, road repair, etc.) and documenting this process without showing the final result of my work; we don’t see the sketches, only the process of making them2. Or I gather people’s voices at public protests and, like a witch, throw them all into a pot to stew3.

Later I observe how people bypassing existing asphalt roads beat paths into the ground4. Then I reflect on work5, and here I collect the paper slips and candy wrappers that my father mechanically twists into shapes and grant them the status of art by putting them in a museum display case6. So gradually my works began to tell me about myself more clearly. In other words, I began to notice more than just the world around me; I began to see myself in the world—and the world inside me. Now, looking back, I see the sure presence of a quiet voice in all my works: I was being true to myself, even if I didn’t realize it.

Now I will try to talk about my works with an understanding of what in them is about me.

A new work begins from the memory of a sensation. Boredom. Time is passing; my life time is being stolen. This is The Cage. Then I start engaging the figure of the contemporary artist, along with what I loved doing during my studies at the classical academy, in my work. Labor Show, curated by Hudrada, where I exhibited Synchronization, is the best setting for this. The witchy gesture of putting aggressive voices into a pot is me overcoming the fear that arises when I encounter aggressive voices in the political arena. This is Unities.

I choose how to move forward; I present my first solo exhibition, titled Trusting Movement. It’s an important step for a contemporary artist. Is bypassing existing roads really freedom when someone else has already set down the new paths? Following them is also about trusting previous experience. One of the works I showed in this exhibition was Paths.

I convert a fragment of my drawing into metal. It depicts the “futile” act of washing the dishes. The most banal, ordinary thing. Making sketches is also routine, a simple artistic action. I made a monument to it, the work Fragment: I enlarged and fixated on what was important to me.

Boredom in the academy. I liked this boredom. For it set off the process of thinking, of wandering consciousness, and it suddenly appeared that everything that was gray was so interesting.

A ray of sunlight creeps slowly over the walls of my studio. Its light fills the painting on my canvas, and when it slips away, again I see the surface of my work, which does not satisfy me, and again I’m seized by a feeling of emptiness. Years later I mounted the exhibition “The Empty Spaces of Doors and Windows Allow the Room to Be Inhabited” (2019).

The window opens onto the empty courtyard with an archway leading to Yaroslaviv Val. For several hours I’ve been looking through the arch at the busy street bathed in sunlight. People move about energetically; everything seems carefree and comprehensible on that side of the window.

Unpredictability scares me; it has always surrounded me, and now I am making great efforts to get rid of my habituation to it. Perhaps that is why routine is such a common theme in my work, along with attention to the flow of everyday life.

I am interested in what lies beyond the result; I’m interested in the process and the traces it leaves when the result is nowhere to be found. This, in part, is how the work Declaration of Intent and Doubt (2019) appeared.

I remember my first strong impression of art: I was seven years old; it was an exhibition of works that Sergei Parajanov had made in secret while in prison. Using the colored foil caps from the dairy drinks (milk, kefir, ryazhanka) he received from friends, Parajanov crafted medallions decorated with various images. I was impressed. Something magical had been created out of everyday things. Sometimes I think that this is what made me become an artist. Two of my works bear some resemblance to this childhood memory: My Father’s Sculptures (2013) and My Father’s Sculpture (2020). I wonder, what will my daughter remember from the exhibitions she sees?

When did I become self-aware and begin to understand that I am actually in my works? When I encountered powerful events: revolution, war, the birth of my child, moments of personal crisis. In 2015 I begin receiving invitations to participate in exhibitions but the only relevant subject for me is the war. And I can only talk about the war from the standpoint of the place where I am right now. Thus the works Order of Things7 and To draw your own window, to crumple the paper8 (both 2015) appear. These works are about the echoes of the war in the place where I am. The war reaches relatively peaceful areas through reverberation and transforms everything. Then I keep moving in step with what is happening in my life, and I produce the exhibition Misplaced Touches (2017)9. After my child is born I turn toward the bodily, the sensory and the notion of boundaries. But thoughts about the sensations that remain after touch would visit me repeatedly for years before I incorporated all this in my artworks.

Sensation is an important word and concept for me. I consider sensation and thought more important than the actual response, act or result. Sensations are the basis that guides response and action. Often I would already know how to act, but reacting was always scary. Sensations and awareness developed in their own time, and then the action occurred by itself. Declaration of Intent and Doubt (2019)10 is when the very state of vacillation and doubt holds great potential. When you are in it, then the decision becomes yours.

The text was written in collaboration with Kateryna Iakovlenko (2022).