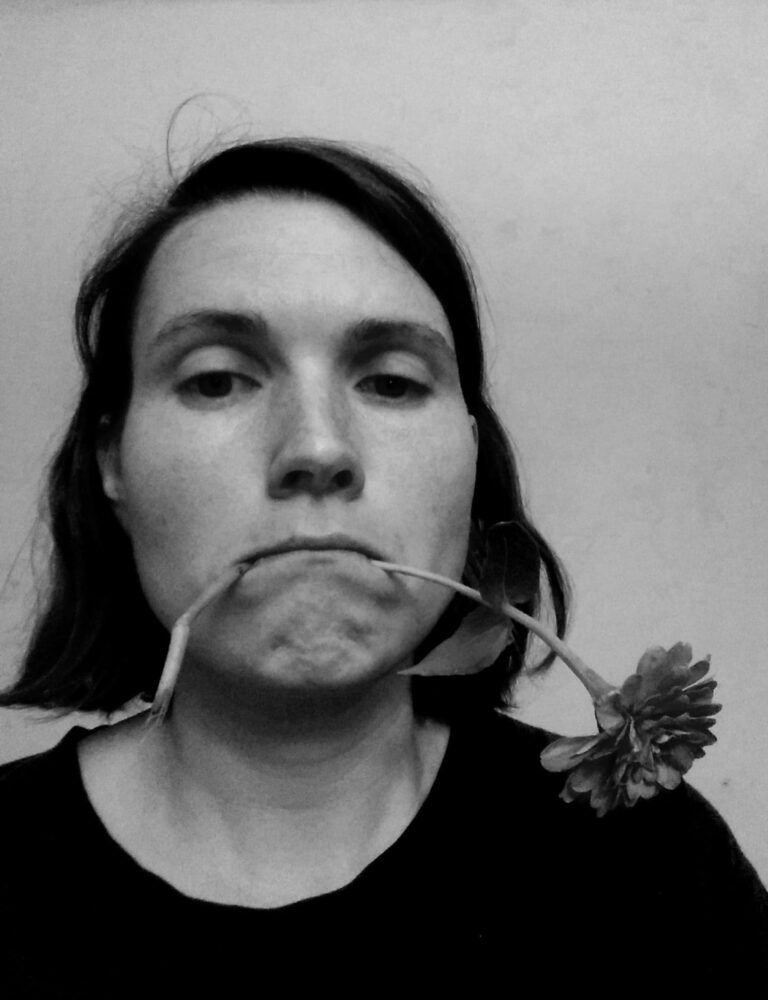 – born 1984. She graduated in the studios Sculpture 1 of Jaroslav Róna and Intermedia 2 of Jiří Příhoda at the Academy of Fine Arts in Prague. During her studies, she went on an educational stay at the Korean National University in Seoul, South Korea. In 2014, she went on a residential stay at the CEAAC in Strasbourg, France. Her praxis is focused on archetypal symbolism and universal secrets. She was one of the finalists of the Jindřich Chalupecký Award in 2016. She exhibits her works regularly at big exhibitions both at home and in abroad.

At first, I approached art from a handcrafting standpoint. Sculpture was a handcraft first for me, which I began to realize when I was working on restorations and felt the tension between freedom of expression and monotonous labour. I see art as more of a philosophy, the perception of your relationship toward society and reflection of the world which is so complicated that we will never know everything about anything. Nowadays, I focus on the monocultural agriculture issues which, however, cannot be perceived separately from the current socio-political issues. My father is both a microfarmer and a craftsman, and, while he has not read any scientific literature on the topic and speaks only from his localized point of view, he has been observing water depletion since the 80s. For me, art is a chance to take a breath and obtain a piece of freedom at least, especially with children. Ultimately, even craftmanship is liberating from where I stand. My work is very fulfilling — someone looks forward to their vacation, I cannot wait to go back working. Not only lately, almost all of us feel under pressure, even from our children. The vision of the future fills us with anxiety and depression from what is probably about to happen. Art allows me to refine my thoughts and experience the current situation. But I also believe that while our reflection of all questions and answers is individual, it also creates new information which may help our perception of the world.

When I attended the Academy of Fine Arts, I gradually stopped thinking of the art as a craft and began to see it philosophically. Figure sculpture helps me focus on certain issues and topics, such as individualism or social empathy. Our civilization exists in the middle of the battle between the technological world and the natural world1. We are both a part of the nature and connected with the technologies as we are becoming sort of anonymous cyborgs. I enjoy thinking in contrasts which result from such symbolical and material conflicts. Such an approach allows me to answer questions of our complex world2.

It is quite paradoxical because before I became a mother, I had taken an interest in Madonna, but I abandoned the topic completely. I realized the essentiality of feminism, especially the eco-feminism, thanks to my children. Lacking the experience, I had been keen on portraying the motherly instinct, but when I got pregnant and gave births, I understood that my initial idea was rather naïve. After all, I try to escape the topic of motherhood because it is my daily bread and I do not wish to capture it in my sculptures. The eco-feminism bears much bigger importance to me. Although my work represents a rather surreal world, it deals with the topics of water, agriculture, animal mutations, decline in numbers of animals, and social injustice not only between men and women but humanity and animals, too, etc.3

In my opinion, politics is the society, in general, as it mirrors our existence. Of course, you can criticize the current politics, and while my work does not appear political, it allows me to think critically. My work motivation is often the disapproval or injustice in the world, even though it is not a part of the process. I am very displeased with our agricultural policies. The discontent should motivate you to work because an artist should be able to think critically. If a person does not live in a vacuum, the political reality and its impacts are not positive. The situation is fragmented throughout the personal lives of everyone. The water in our well also ran out because they permitted housing development on the opposite hill. We set up a neighbour club to confront a local developer more easily, plant new trees, renew the ploughed country roads, … That is my civic outrage. This is not art but my personal need to change something and that is completely natural. It is our driving force to change things for the better. I spoke with the Czech artist Jan Trejbal once about art school graduates who do not find any success as professional artists (which happens to about 85 % or more of them) and find work wherever else. A big part of them goes on to live in the country outside of Prague. Their artistic perception may influence the rest of their lives after finishing studies which, in turn, influences also people and environment around them. It may be unseeable, but it is very strong. When we moved to the village of Klučov and set up the club Nekluč, initially, the locals saw us as ecoterrorists. But in the end, they began to help us and involve themselves in politics. While it has nothing to do with art, it is the artistic perception used in the real world.

My views are rather dystopian. The history has always repeated itself and it will always do so. I am interested in the symbolics of both historical and natural elements. When I work on beehive sculptures, which use bees to inhabit the sculpture, the work has, on one hand, an environmental value and, I, personally, need to work with the beehive symbolics from the Ancient Greek perspective, meaning, if I leave a cavity in the sculpture and bees make honeycombs inside, I observe the spiritual qualities of the symbolics as well. Before the Ancient Greeks domesticated bees, they believed them to be the symbols of Death and resurrection and immortality. It was because they saw bees reside in the cavities of corpses and they mistook them for souls coming back from the Underworld. Such is the case of an inspiration from history which does not lack the spiritual dimension. I believe that people who take interest in the nature today should look for a spiritual overlap. As I push backwards, I search for spirituality which I cannot currently find but it may be just another escape456.

Last year, I had the honour to participate in the exhibition Possédé.es by Vincent Honoré in Montpelier, which was inspired by the Silvie Federici’s book Caliban and the Witch. I have a complicated relationship with witchcraft due to my Roman Catholic background. My mother is also spiritual but in a rather conservative manner. My father is a farmer who is, I would say, spiritually bound to the land7. I would describe my approach toward witchcraft the same way as I approach the symbolics of Good Friday, when you are not allowed to garden (among the exhibited works were e.g., Easter Guard /2014/8, Singing Alien /2020/9, Born from the Soil I, II, III /2012 a 2020/1011, etc.). When I look around me, gardening appears to be more often a woman’s job which is why it also could be a kind of witchcraft. According to the Christian law, you are not allowed to dig in the ground or even touch it on Good Friday because it puts you in danger of getting closer to Hell. For that reason, I see witchcraft as a kind of a continuous gardening which you can practice even on Good Friday.

The text was written in collaboration with Eva Skopalová (2022).