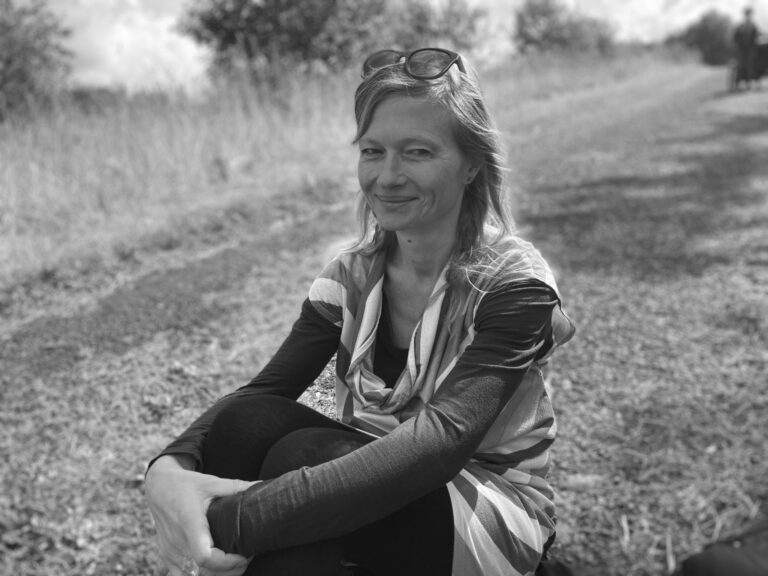 – born in 1974. She studied (1992-1998) at the Photography Atelier and at the Atelier of Conceptual and Intermedia Art of the Academy of Arts, Architecture and Design in Prague, and later obtained her Doctorate at the Charles University Pedagogical Faculty (2009-2014). She was twice a finalist of the Jindřich Chalupecký Award for young artists. In her work, she explores the possibilities and the essence of photographic media. Her own (primarily black and white) photographs are often combined with video projections or found objects.

Photography meets my inner need to express myself to the external world. In my opinion, its role is to create diversity. Artists can challenge people to perceive the world in a different way, and thanks to that, we are a society with ambitions larger than the provision of basic necessities – food and reproduction. However, sometimes it seems that the art scene forgets about the broader context, that is, a reasoning for why my work should actually be of interest to anyone. I consider it important, then, to ask the question Why? and to defend my work to the general public. I don’t intend for my artistic work to give concrete answers. I react to life, and life comprises questions both concrete and vague questions,  perceptions and situations. I am mainly interested in those that are more difficult to comprehend and express.

From my initial studies of classical photography up to the present, in my work I address the transformation of photography as a medium, not only technically, but in the overall perception of its role in society – its storytelling value, ability to deceive, multiplicity and accessibility. I see its metamorphoses as the impulse to find new paths. For example, in an older series, Klasika (2001–2004), I focused on the credibility of the image and whether the mechanical eye of the camera can be made to capture the present as if in another historical period12. The Cyclone series (2004–2005), based on an indirect comparison of photographic pairs taken at different intervals from the same stand, pulls the viewer into a sense of uncertainty about the sequence of events and phenomena, as well as the very principle of photography.  At the recent Silicones exhibition at the Fotograf Gallery in Prague (December 2020), I presented a multi-themed selection of photographs which were augmented by spilled silica sand.345 By adding physical material, I attempted to “decelerate the transience” of the moment, whose unique here-and-now quality has been a key element of this medium since its inception.

I have been building up my own private archive since about 1997. There are thousands of my own images and a number of interesting pieces that I didn’t photograph. For instance, the glass negatives of my great grandfather, who was a musician in the Austrian army and traveled the world’s seas and oceans on an army ship [My Cup of Sea, 2010–2011]6. I usually work in such a way that I use this archive to enhance the theme of a given project. I present the individual images in conjunction with others to contemporize them. It does not matter whether the photographs are one year old or ten years old, whether they were taken in Prague or  Portugal … Working with a series of photographs also enables me to express myself on the theme from different angles, with more layers. But I have to have a reason to create a series instead of just one photo. I recently completed an extensive collection called An Attempt at Regaining Reality (2011–2019), which contains ten photographic series, including installations and video installations789. The point of departure for the motif of each of the Attempts is a found image or object, to which I join a larger number of photographs from different places and time periods. The series thereby functions as a presentation of rediscovered “evidence” which demonstrates that (based on the contextual transformation) the reality of the images is always represented differently and afresh.

I’m quite naturally interested in historical events or even apparently meaningless moments in which I find inspiration or timeless themes. I’m fascinated by visits to outer space, for instance. I like when a work of art succeeds in evoking a variety of associations. My aim is that the photograph or series should have a message that is “unspoken” and that the viewer’s perception makes up the rest of the story. My work Shopping is my Hobby offered up several interpretations10. It came about in 1998 in response to the boom in shopping center construction. The final rendition of this work in the public space was preceded by a series that I completed during my semester as a student in Norwich, UK. I had just left Prague for Norwich, and the head of the studio, professor Pavel Štecha, assigned the semestral theme of “Wenceslas Square.” I knew that I would not be able to take photos of Wenceslas Square, but I had to submit my work at the end of the term. So I made a small model of the statue of St. Wenceslas, the main monument on the square. On the streets of Norwich I performed a number of “silent performances” in which I lay on my belly or stood on a post to find the “most credible” images. At first glance, St. Wenceslas in the foreground evoked a Prague experience, but then the background revealed a strange, unreal context. I carried the model in a transparent plastic bag. In the end, the shot of the woman (my classmate) holding the bag seemed like a significant moment. With the addition of the message about shopping, the image evokes other possible interpretations in a broader socio-political or even feminist context.

At the end of the 1990s, when I appeared on the art scene, I didn’t feel any gender disadvantage. Perhaps it was the euphoria of the post revolutionary atmosphere, which was beautiful, but failed to see many systemic problems. Today, thanks to feminist activities, I feel a greater awareness in society as to the status of women. Similarly, with the new millennium, I see more local interest in women’s art.  Obviously, the first step had to be taken by women, but it is clear now that the issues of feminism are not ignored by men. I see the future of feminist art as I do the future of every politician: if it is “fertile ground,” it will grow; if not, no one will need it. I do not distinguish between feminine and masculine art, but the duality of masculine and feminine principles seems natural to me. It generates a certain tension in the way we look at art or the world. I am proud of my womanhood and I consider having a family a gift; this feeling is stronger for me than the sense of a “career on hold.” Thanks to motherhood, I have also begun to look at some topics from a different perspective (e.g. The Last Footprint, 2018)1112. In addition, every work of art requires devoted time and concentration. I feel that having my own family has taught me to manage myself better in this arena.

This text was written in cooperation with Kristýna Péčová (2020).

Kristýna Péčová – born in 1993, is an art historian and curator. She focuses mainly on the art of the 20th and 21st centuries, in which she likes to break down the boundaries between so-called higher and lower, fine and applied arts. She is currently working at the Department of Fine Arts of the Academy of Arts, Architecture and Design in Prague and she is preparing the next edition of the International Symposium of Ceramics in Bechyně.