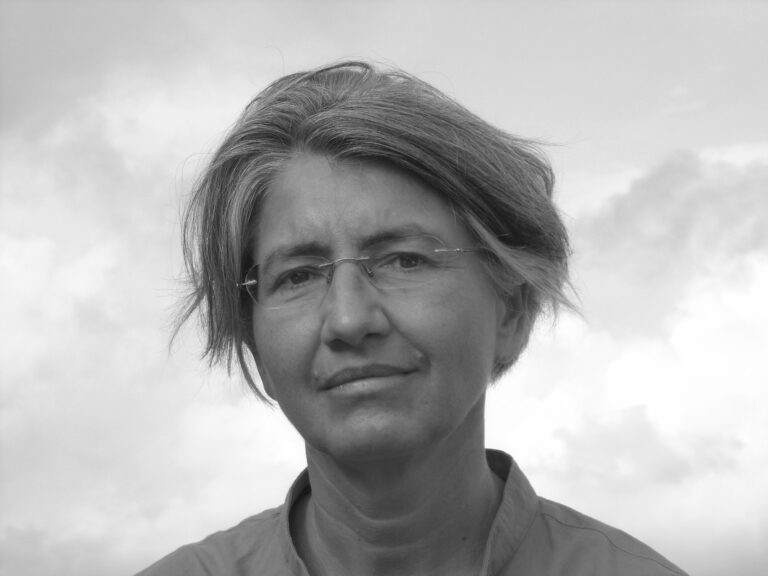 – born in 1964. She graduated in 1989 from the then freshly launched, photography-centred department of Visual Communication and Typography of the Hungarian Academy of Applied Arts, where she pursued her Master degree in Visual Communication. She obtained her DLA from the Hungarian University of Fine Arts in 2010 and is teaching at the Intermedia Department of the institution since 2011. Throughout her career characterized by a consistently built visual language and intellectual vocabulary, Eperjesi has been examining media theoretical questions and the social consequences of the use of media. In her practice, the artist examines with sensitivity and almost scientific methodology the specificities of the photographic medium, its unexplored possibilities and meanings, as well as the power contexts that define social existence. Her conceptually oriented works and their intellectual background are not mere theoretical derivatives, but aesthetically high-toned and sensually rich creations. (Excerpt from the artist’s website)

I was always interested in the nature of small changes culminating in larger changes and the potential of the turning point. I explore the disintegration of processes, the visualization and separation of each phase and detect when it is necessary to highlight them as individual entities or if I can grasp the point where the process is no longer reversible. In the beginning this was mainly manifesting in representing physical movement and depicting the turning point12. I’m intrigued by the situations that we can observe while they are changing – certainly those which can reflect themselves and capture these processes3.

For self-reflection and its representation I find photography, especially photograms are the most appropriate media, my colourful photograms prove these aspects. From time to time I keep returning to a series I started in 2014, in which I fold the photosensitive material to itself so the sensation of colour and the spatial nature of the phenomena are simultaneously captured, while the sensation of colour also becomes understandable456.

I approach the forming idea and the hypothesis discovered by my artistic sensitivity with research and experiments, supported by the experiences I gain during practical work. During the process of researching the idea is also transforming – this is the way I usually find the medium of my works, though sometimes the results of my research form the idea. My aim is to unearth and understand deeper references between seemingly inconsistent things.  My works are built on the analytical observation of various phenomena. I would highlight Dóra Maurer as one of my masters – she was the first person in my life who made me aware how this attitude of life can be related to art.

I often used bodies in my works; I was interested in the movement and the anatomical specifics of the body, rather than its gender. The only moment it became important that I am a woman was when I wanted to have a child, as my body is able to bear a baby. This is the only motif in the series of my works when my biological sex played a role. Together with Tibor Várnagy I wanted to document with objectivity and on a real scale how a woman’s body is changing during the pregnancy. In addition, this biological process is in line with the essence of photography called latency and with thinking about photography as a medium as well. I would mention here my installation titled Newborns7, in which I took photograms about babies of my friends and my own daughter who was born only a few days before. “Labor”, my exhibition presented in 2015 is the synthesis of my thinking about the medium of photography. In this show I connected my earlier works with new ones such as the work titled Latency/Pregnant8, in which I used photograms about my pregnant body created in 1992.

The founding of the Work Photo Theory Choir that stages texts about theory of photography in a playful way is also related to this exhibition. As a matter of fact, my whole artistic career can be interpreted from the viewpoint of the medium of photography, although I rarely take pictures or even use a camera. Instead of the gesture and action of capturing with a camera I find another kind of performativity that I unfold in the medium.

It might seem strange but I became aware of gender through my own work, while I was creating the artworks for the series Recycled Images. Until that time, I had a limited knowledge about gender – I believed, as so many others did, that only work matters, nothing else. The series is based on a collection of images – which I am building approximately since 1989 – of transparent packages and directions for use of products printed on them. Because of their transparency it was obvious for me to handle them as quasi negatives and make blow-ups of them. The collection was kind of thematizing itself while growing and the images were systematized. The abundance of working hands formed the Busy Hands9 series. I realized that 95 percent of the hands doing chores were female hands. Since I have a view on the nature of sexism, I am handling it more consciously – this helps me navigate in life and also creates space for artistic and social reflection10. Plastic bags also appear in my new genre public art project, the action called Advertisement-FreeZone.

In the performance11 and exhibition You Should Feel Honoured I attempted to compare classical art and the sexism of state socialism through an exact case that arose in a chaotic period leading to the regime change in Hungary. I wanted to focus on inequalities produced by art, as art is a field where a number of examples can be found for the reproduction of the prevailing patterns. These traditional forms reproduced by art are resonating with other forms of exploitation: women are seen as raw material, serving biological and natural needs in many segments of society. Although these forms in other fields are no taboo for art, they are for art itself. Using the case study does not exclude me from connecting my work with the case of women. The stake of the sculpture and project titled Pathos and Critique12 was to find possible visual narratives and modes of representation, which are as sensitive topics as talking about victims.

Observing the stations of change is not only a medium specific question for me, but also a social one. My starting points are my personal experiences but I create artworks of them only if they align with general experiences I come across during my research. This also applies for my works related to my interest in science and experiments with colours. My works are not directly derived from my personal experiences but from the social, political and scientific aspects I explore analytically. My works are parts of my life so they are always political. I also made openly political artworks that I created when I found the arrogance of the ones that own political power in Hungary humiliating and its social consequences problematic13. The rhythm of repetition and change in my work sometimes has a very personal dimension, but at the same time, it also incorporates sensitivity towards social issues. Such as the work 365 days of D.14, in which the patterns of the life and ego of a man struggling with autism is shaped by the objects formed by him as an everyday activity.

The final version of the statement was written in collaboration with art historian Kata Balázs (2020).

Kata Balázs is an art historian living in Budapest. She graduated from both departments of Hungarian and Art History studies at ELTE University in Budapest. Since 2007, she has conceived and contributed to numerous publications mainly focusing on avant-garde and neo-avant-garde art, held a teaching position at the University of Theater and Film Arts in Budapest, the Visart Academy of Arts, the Károly Eszterházy University of Eger, worked at Ludwig Museum Budapest and as a young research fellow at the Art History Research Institute of the Hungarian Academy of Sciences. In 2020, she joined acb ResearchLab as researcher.