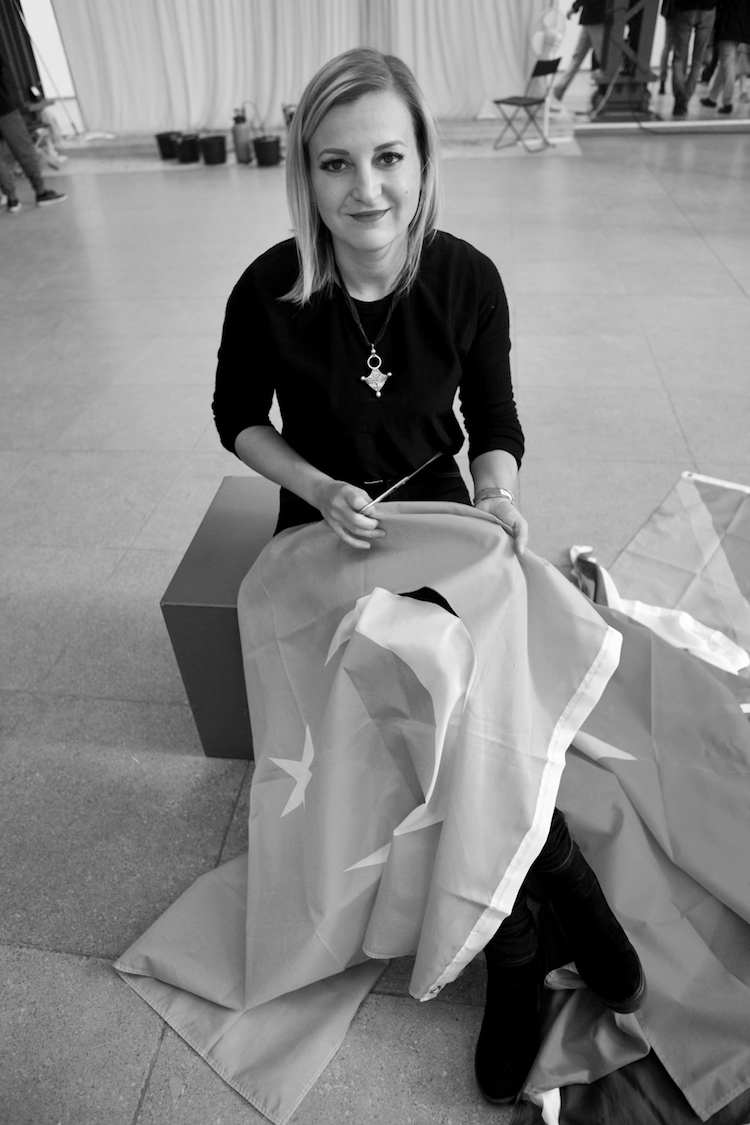 – born in 1975, Budapest, currently lives and works in Berlin. She is a graduate of Department of Sculpture at Accademia di Belle Arti, Venice and Institut für Raumexperimente in Berlin. Combining her background and the experiences faced as an immigrant, she developed a practice that focuses on the relationship between personal identity, culture of origin and need for integration. Her projects are usually connected to the socio-cultural context she lives in and are inspired by daily life. The experience of the urban space and its connections between the political, cultural and historical context is crucial for her work.

Portrait of the artist by Petra Fantozzi.

For more than twenty years, I have been living in different West European countries, being fascinated by cultural and social approaches that differed radically from those I experienced during my childhood in Hungary, under the socialist regime.

I started my studies at the Academy of Fine Arts Vienna in 1998. Later on, I attended art schools in several other countries (Italy, Spain, Germany) enrolling either as a student or as what I would call a “long-term tourist”. During my “Vienna years”, Hungary had not yet joined the European Union, which made my stay strenuous, both administratively and financially. During my wanderings, my native country became part of united Europe, theoretically ensuring the free flow of people and labour. Despite this, acquiring the documents needed for a legal stay in the EU remained a demanding and time-consuming process, often generating absurd moments or simply unfulfillable requirements1.

As a former immigrant, I approach the phenomenon of migration from an emotional point of view by tracing a map of difficulties and states of mind that occur in everyday life. The importance of urban space became essential in my work. Examining the relation between political, cultural, and architectural contexts – and especially the modern architecture of the 70s and 80s in the suburbs of Budapest, that I later compared to the suburbs of other Eastern and Central European countries – became my deep study about “real life” of people living in the socialist era and an autobiography at the same time.

Socreality2 was an earlier piece, and later, it also became the title of my final thesis for the Academy of Fine Arts in Venice. The video was made using the motif of Western “reality shows” but ironically, my “reality show” was made in Hungary in the 80s and mid-90s. I wanted to show everyday life during communism, showing the real life of people within the Socialistic Regime. My will to do so appeared when I lived in Austria, Spain, and Italy, as everyone asked me about those times. The people born in a western context thought that socialism was something good (especially in Italy where communism was fighting back against fascism); people often thought that it was something super romantic, that it was nice that everyone had the same possibilities. I always told them that indeed, everyone had more or less the same possibilities, but everyone was poor. I used recorded pieces from TV daily news and propagandist films from the Hungarian film archive. They showed how “good communist people” should live their lives. They presented happy families in block-houses; happy pioneers at the school. They were a lie that we should’ve desired. I used those archival videos and inserted my personal childhood photos into them. Not realizing this beforehand, I discovered that the life of my family perfectly corresponded to the model of a typical socialist family3.

The series Time Lost45 from 2007 presents administrative documents acquired during a period of nine years (residence permits, visas, passport stamps) in embroidered patterns. I did my very best to painstakingly jump through all the bureaucratic hoops, and to illustrate this I embroidered every tiny letter, code, stamp, and signature on these forms, even if the task proved to be time-consuming, senseless, or sometimes simply undoable—I also occasionally hurt myself with the needle6.

The same subject reappears in the video installation Cosmopolitan, 20097 comprising films in three different languages (Hungarian, Italian, and German), and in which I relate the absurd difficulties of changing my residence from one country to another. I dispassionately list the kind of detours that self-contradictory regulations within the EU have compelled me to take. As my experience shows, some sort of productivist bias creates a situation in which the free movement of workers is conveniently regulated only for those who toil in the economy at large, while the endeavours of an emerging visual artist fall outside this category. In exhibition situations, the screens of Cosmopolitan are installed in such a way that the sounds of the simultaneously running monotonous narratives converge into a cacophony, conveying a feeling of befuddlement over the discrepancy between the proclaimed liberty of EU citizens and the artist’s own frustrating experience8.

When in 2015, the current Hungarian government built a huge wall on the border between Hungary and Serbia to keep migrants out, my anger inspired me to create Welcome to the EU, 2016910. I also realized two more wall installations on this topic, Windless, Variations for the EU Flag Nr. 1, 201611 with multi-coloured kitchen knives that create a fierce circle, and its variation entitled Windless. Variations for the EU Flag Nr. 2, 201612, in which I ironically composed a circle made from Japanese shuriken, star-shaped weapons that are thrown to kill.

My most recent work Fragile Juncture, 20201314 is a work that encompasses pressing issues concerning the European Union, Brexit, the Corona Crisis as well as the growing right-wing/anti-EU movements and Nationalism within the EU — all of which are creating troubling situations and fragile junctures in the socio-historic condition of the European Union. The EU thus faces its greatest challenges and needs to find solutions before this union of nation-states collapses entirely. I was frightened and very worried when I found pictures of protests against EU membership, EU politics, refugees, and foreigners in general during my research on Google, which I found in all 27 EU member states. Following this, I selected pictures of these anti-EU demonstrations, sorted them by country, and drew them on a large canvas (250 x 230 cm) with graphite pencil. All of them together created a large map of Europe. Then, I cut the canvas in such a way that the neighbouring countries are only held together by a loose, thin sewing thread. With this work I want to point out that this is a very fragile, historical moment in which we all have to fight against the deliberate nationalistic and right-wing extremist waves of politicians in order to preserve the values of the European Community together15.

The Site-specific installation at Neue Nationalgalerie in Berlin entitled Stairway to heaven, 201416 was inspired by beliefs ingrained in Hungarian culture. The installation consists of an 8,5-meter-long rope-ladder hanging between two circle-shaped mirrors placed on the roof and the ceiling.

According to certain theories, the ancient Hungarian religion was a form of Tengriism. Tengriism is a shamanistic religion, which was common in the early Turkic, Uralic, and Mongol communities. The central symbol of the shamanistic cosmology is the World Tree, which connects heaven and the underworld to our earthly world. Shamans were travellers between these three spheres and intermediaries between worlds, thereby acting as spiritual leaders for their communities. From the beginning of humanity, this function was filled by the shamans, but they do not exist anymore in Europe, and the structure of these societies have changed.

Artists often ask themselves how they can be useful today for society. I believe that the role of the shamans should be filled by the artists today and they should liberate the people from their everyday life and bring them unknown parallel dimensions. I understand that maybe that kind of journey could be a solution for contemporary people in their everyday material lives – giving them a kind of freedom or just something to believe in17.

In the frame of Per Aspera ad Astra, 201718 – an artistic intervention I made at the Hamburger Bahnhof in Berlin, I cut out the astral symbols — the iconic stars, planets, and suns — from several national flags and release them back into the sky, sending them off with balloons to where they belong. This gesture liberates the symbols from any political use or connotation. Only the artist or modern Shaman, per the artist’s argument, driven by utopian ambition and under a state of non-belonging, is able to overturn conventions and constraints to convey new visions that transcend political and economic models.

The performance is an open-minded invitation and search for yet un-thought solutions to gaining global harmony and happier life on earth. I’m convinced that artists are able to influence or change public opinion, influence political decisions, and make invisible things visible by using their magic instrument called ART.

The statement was written in collaboration with Magdalena Adameczek (2020).