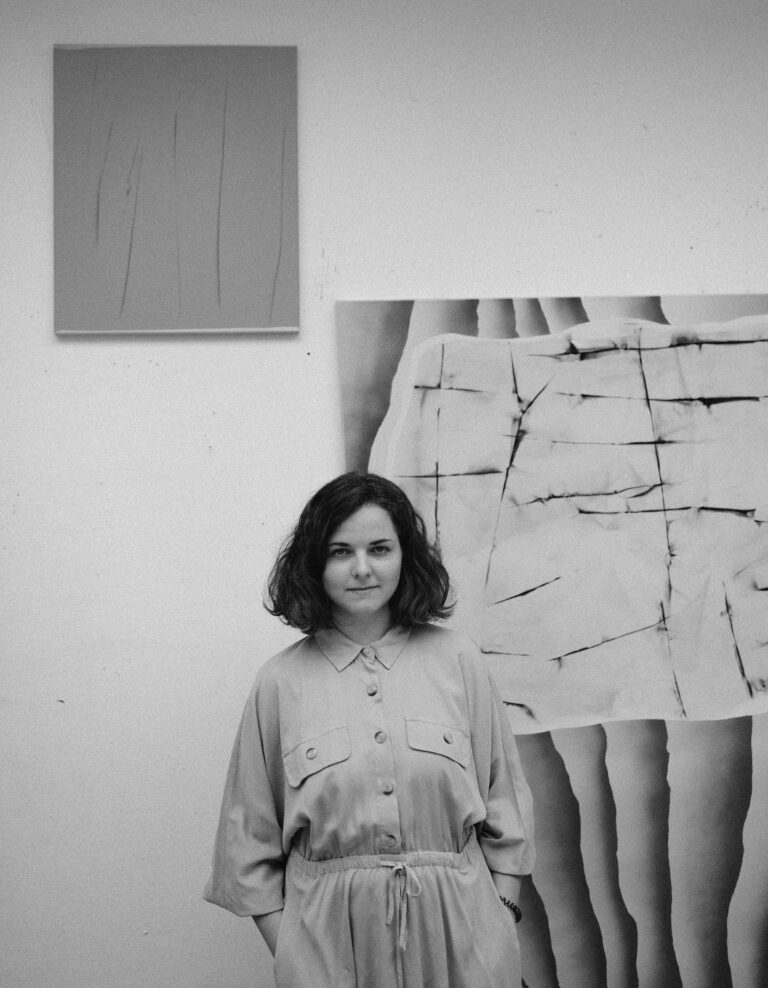 – born in 1989 in Bratislava. She began her art studies at the Josef Vydra School of Applied Arts in Bratislava. Subsequently, from 2008 to 2014, she studied at the Academy of Fine Arts in Bratislava, first at the Department of Free Graphics, later at the Department of Painting in the studio under the guidance of prof. Daniel Fischer. In 2013, she completed an internship at the Academy of Fine Arts in Budapest in a studio led by Imre Bukt. She has participated in several foreign residences and symposiums. She actively presents herself at individual and group exhibitions at home and abroad. She was a finalist in the Painting of the Year Award for three times.

Portrait photo of the artist by Marcus Oliver Obert.

My primary interests include the subject of identity. On one level, it reflects a natural search for my own place as I was born and live in Slovakia, but I have Hungarian nationality. However, I do not deal with a direct examination of the political problem, the question of nationality, but rather focus on the reflection of inner experience in the space between. It is equally important for me to find the identity of the painting itself. I deliberately build on its historical development and, through subtly shifts I examine the role of the painter today. I perceive art as a tool of improving or education, an opportunity to form an opinion – the basis for me, however, is a visual grip, in which it is only subsequently possible to decipher the references or attitudes. I find space for free play in this traditional medium, where the only limitation is the format.

My paintings are abstract compositions in which I connect various characters and structures. I like to experiment with the material, and I approach the canvas as a textile, a fabric that can be shaped. The smooth surface is replaced by tactile defiance, organic softness or airiness is complemented by rough, sometimes almost industrial materiality. I try to complicate the viewer’s view and the natural human instinct of categorization. When the incoherent elements in my works are combined, there is a certain disturbance, mutual overgrowth, or seepage, as if stone, concrete, gravel, wood, cardboard, or charcoal shines through the abstracted clouds. However, within the framework of the apparent contradictions, I strive for an atmospherically harmonious whole in which a comprehensive statement is legible. Abstraction allows me to release the subconscious and leave the black and white categories either/or. These exempted formulations are, for me, capable of harmony and internal consistency even in their contradictions. The resulting works embody the possibility of ambiguity, which is often the most authentic quality of our existence, regardless of whether we deal with nationality, emotions, or artistic categories. I also apply this liberated playfulness in a series of collages, which develops my painting series schMERZbild123. Also, in my collage work4 I use the above-mentioned approach through colour, material contrasts or a relaxed linear gesture. Like many side projects, these collages provide some insight into the principles of my approach to the painting.

However, this subtler work with contrast, disruption and stratification of identities was preceded by work with more specific processing. My school series of paintings, in which I studied the question of identity in diptychs through the two banks of the Danube, was followed by the happening Monumentus567, which took place directly on the riverbank. With the help of the locals, I planted cacti by the Danube in my home village, and with this planting of exotic plants in an (for them) inhospitable environment, I reflected on the themes of home, immigration, migration, and adaptation. The projects Hater Painter89 and Curator Shooting1011, in which visitors or the curator of the exhibition shot at my paintings with an airgun, represented a more intense examination of the identity of the painting. The element of a certain danger, the destruction of the “untouchable”, the joy of violating the forbidden, but also the aspect of vulnerability outline what I call “the second puberty in painting.” I think that after this rebel phase my works did not resign to questioning but matured into a more sophisticated coding.

A common denominator in my works is also the study of time, especially attempts to stop it. For me, art is a tool to break free from its standard flow – by exploring and capturing processuality, but also by creating the possibility of immersing myself in a certain timelessness. The time-conditioned quality is also the feeling of nostalgia, with which I work continuously. I problematize the possibility of capturing a collective feeling, a shared, universal experience. At the same time, however, by turning to the past, it is possible to approach finding (in the current world of insufficient) certainty – the past as immutable, solid, understandable in the context of the unreadable complexity of the present. Although I am developing a program of constant self-questioning and questioning, it is the space of nostalgia that can be a certain anchor. Nostalgia allows us to cultivate the idea of ​​an ideal place that has been and where the tentacles of the demands of our daily lives will not reach. In my artwork, nostalgia can also be a starting point / refuge from overpressure of self-questioning – if we ask who I am or where I belong, it is only natural to talk also about what once was.

Finally, an important resource for my work is the past, specifically avant-garde movements. My interest in stepping out of the stereotypical perception of painting is enriched by the approaches of authors from the history of art, whose legacy I do not consider closed and which I want to move further. I focus my perception on feelings, essences, at first glance less conspicuous details – minor disturbances in everyday flow. The absurd detail, the moment of wit, is precisely the stopping of time that is characteristic of my artistic practice. Naturally, this results in my inclination to the knowledge that the Dada movement has brought. For me, the avant-garde is not a dead, petrified chapter in the history of art, but a source from which to draw and whose questions can be further developed, answered. For example, in the aforementioned schMERZbild series, I create works that on the one hand can be perceived as satisfactorily old-fashioned, but at the same time I strive to make them juicy contemporary. An integral part of this practice for me is also the knowledge that I refer to the legacy of the avant-garde as a woman. It is abstract painting or geometric abstraction that is often understood as a rational, masculine domain, into which, however, I freely enter, disrupt the strict positions of abstraction with lyrical elements and bring my essentially personal – and therefore also feminine – perspective.

The text was written in collaboration with Michaela Kučová (2021).

Michaela Kučová was born 1988. She specializes in journalism, project management and PR in the field of culture. She has collaborated on projects such as PechaKucha Night Bratislava, Dymová hora, Oskár Čepan Award, White Night and Question of Will. For two years, she led a series of discussions on gender issues in Slovak art at the Art Books Coffee Gallery. Her texts were published in newspapers SME, Denník N, Pravda, and magazines Profile, Artalk or Kapitál. She contributed to the catalogues of Kristína Mésároš or the annual exhibition Take Care organized by Academy of Fine Arts and Design in Bratislava. She is the co-founder of the feminist newsletter Kurník.