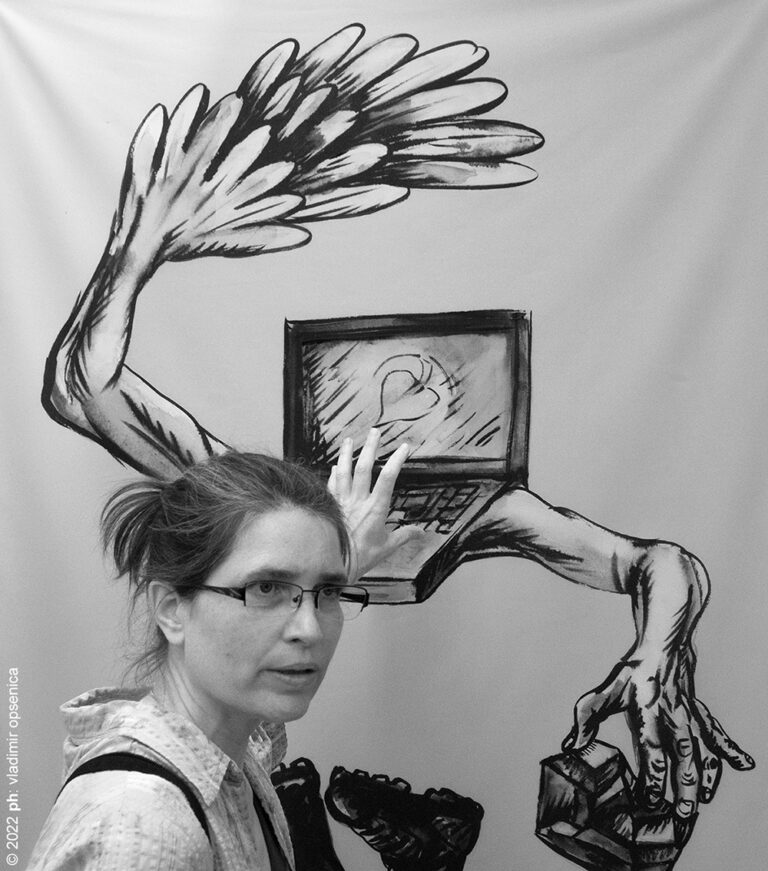 – born in Germany in 1970, she lives and works in Belgrade and Berlin. She graduated in 2002 from the Faculty of Arts, University of Kassel, Germany. Since then, she has been developing a collaborative artistic practice with Vladan Jeremić. She explores the overlap between the areas of art and politics, exposing burning social contradictions. Her works include artistic installations and interventions that include drawings, prints and sculptures made from inexpensive materials such as textiles, cardboard and wood. Her works are kept in the following public collections: Thessaloniki State Museum of Contemporary Art, Thessaloniki; October Salon Collection, The Cultural Centre of Belgrade; Museum of Contemporary Art of Vojvodina, Novi Sad; Collection of The Museum of Yugoslavia, Belgrade; Van Abbemuseum, Eindhoven, Mudam, Luxembourg and Reina Sofia Museum, Madrid (with the Chto Delat art group).

I cannot separate the creation of art from social activity as a whole. At the core of my practice has always been the experience of contradictions. As peaks of some development, it is precisely the contradictions that open the field in which I can determine my current position and where I can formulate it and carry it out as a practice.

Art is fascinating because, unlike theory, it can encompass the sensory realization of certain conceptual constructions in concrete objects or actions. That way and up to a point, concepts can be tested in real life. In order for the ideas to even have a chance to survive beyond my imagination, I collaborated from the very beginning with other people in the process of creating art. I experienced authorship as a structurally imposed concept that conflicts with the effort of developing art as a social practice. It was there that I first clashed with politics within the field of art, with the standards and categories established in the art academy at that time1. However, that did not prevent me from continuing my artistic work as a dialogical practice, which has its significance not only in the form of the final product but also in the dialogical process of development from idea to realization.

I find it interesting to study the institution of art and its politics but I also consider the reference points of my practice are mostly set outside that institution, more precisely, in concrete social policies, discourses and movements, whether they be contemporary or historical. I witnessed the strong development of identity politics and the general culturalization of the politics of the 2000s that had an impact on the framework of my artistic practice, which at that moment was already articulated through joint work with Vladan Jeremić (since 2003), leading me to deal with the relationship between art and politics more explicitly. In Serbia, in the context of art funding mainly from European cultural funds2, or within exhibitions of the “Balkans” art scene abroad3, the artist was often asked to define his/her identity or to satisfy the idea of certain characteristics attributed to “the Balkans”, female, queer, or socially and politically engaged art. Perhaps it is symptomatic that, at that time, part of my practice was completely separated from the world of art. For several years, I have worked in the educational and publishing sectors4, engaged against historical revisionism in Serbia5, or relating to issues of erasing the historical experience of members of the Roma community and the situation in which they live today6.

Working with socially engaged people from disciplines such as sociology, education, and historical science has influenced my artistic practice so that I increasingly framed it as research. In addition, I see it as a specific type of intervention in given social circumstances7. I try to analyze them and provide a kind of commentary and answer that make sense, not only for me or a narrow artistic audience, but for all people who are interested in social issues. My research on a certain topic can last for years and that process involves interlocutors who follow my work and whose work, in turn, I follow. Through dialogue and detection of the meeting points and differences and then through various forms of joint action I find, again and again, the reward that this approach and way of artistic work brings me. It is the joy that comes from deep social connections. In this sense, art objects are notes or remnants of joint reflection and action8.

I think that much of artistic work today has a similar status to that of “care work,” a form of unpaid work directed toward community and the reproduction of order. Historically, this role was imposed on women and other persons who were considered the property of their masters. I am convinced that, due to the social expectation that says they take care of their environment “naturally”, it is harder for women to fight for adequate compensation and recognition for their involvement in all spheres of life. With the concepts of identity, belonging and origin, I associate a mixture of intimate feelings and the reactions from the environment, the content of which is constantly changing. I feel uncomfortable with the division of people according to these criteria, since in the final consequence, due to its exclusivity, that categorization leads to repression and violence.

Since childhood, I understood belonging to the female or male gender as a socially imposed role and already in kindergarten I developed certain survival techniques beyond following or fulfilling such patterns, and perhaps art is one of them.

The text is written in collaboration with Simona Ognjanović (2022).