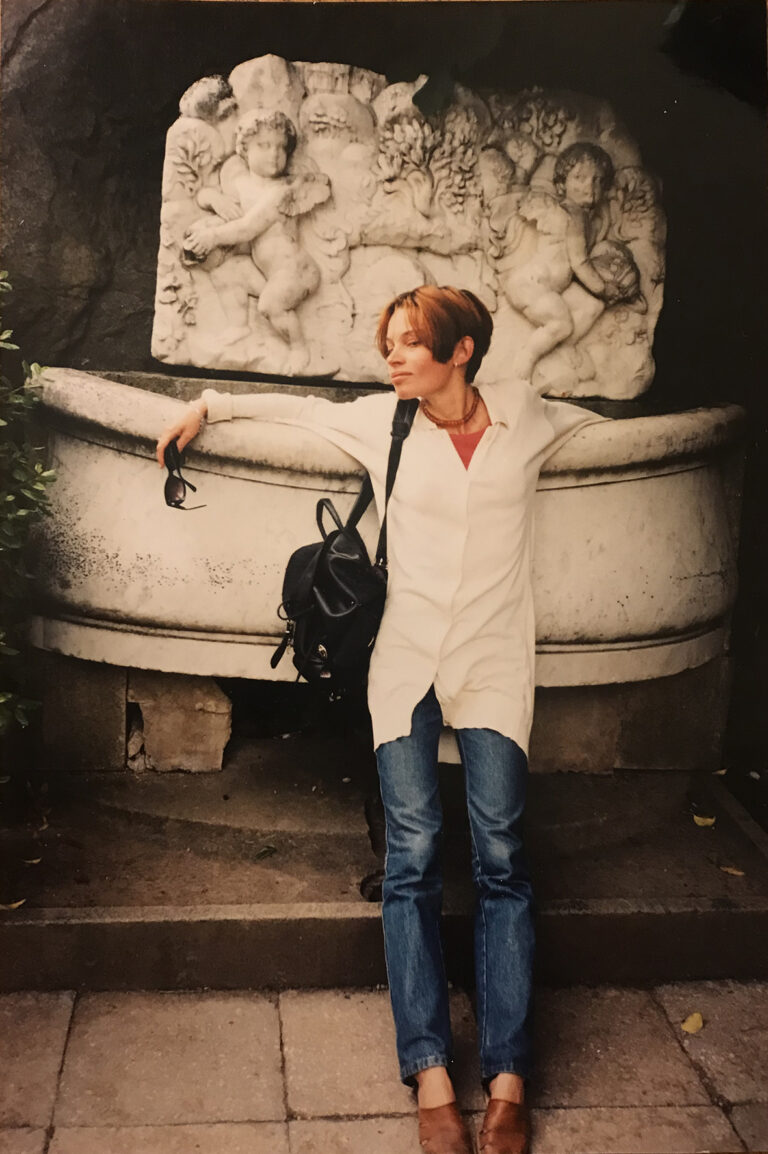 – born in 1970 in Kyiv, died in 2004. Studied at the Kyiv Art Institute (currently, the National Academy of Fine Arts and Architecture) at the Faculty of Architecture. After the 2nd year of study, she gave birth to a child. While being on maternity leave, she attended the art institute and mastered graphic techniques. In 1994, she resumed her studies at the department of easel graphics. She is a 1988 graduate of A. Chebykin’s studio. Participated in group exhibitions, played a part in international biennials and triennials dedicated to graphics. Worked in the techniques of lithography, etching, engraving on cardboard, linoleum and plastic. Painted in watercolor and gouache techniques. In 2000, she joined the Ukraine’s National Union of Artists.

The 1990s were a special period of uncertainty and confusion, and Nataliia Bazylevych’s artwork bears its characteristic imprint. Her moods were reflected in her literary hobbies – she illustrated Byron, Knut Hamsun. Therefore, one epoch was like a reflection of the other: what she was experiencing was readable through the quotes. I remember that she was fascinated by the Pre-Raphaelites – among all the artists. They had something terribly perfectionistic in them which was close to her tastes. According to her ex-husband Serhii Savchenko, Natasha once became fascinated by the concept of “Deus ex machina” (god from a machine). This plot technique, which originates from the ancient Greek theater, allows you to resolve a conflict abruptly and in an unexpected way. Artificial interference in the “logical course of events”, the “happy ending” that no one expected, the removal of a hero who was an unsolvable problem by the hand of  a “god from a machine”, an unexpected way out from a deadend. Natasha found an echo of this technique in Marquez: one of the heroines of One Hundred Years of Solitude went out to hang clothes, and at this time the wind blew, twisted her into one of the sheets and carried her away somewhere. Since then, there was no mention of this heroine in the text. Natasha was absorbed by the idea of ​​such a disappearance.

She dedicated a series of etchings Clouds to the topic of the “divine ratio”, which she exhibited in Kyiv in the mid-1990s1234. In Clouds you can feel her architectural background, enjoyment about the aesthetics of drawing. Natasha erases the sun and the clouds, the objects  belonging to the force of nature that are always changeable before our eyes, endowing them with the static scheme of the “divine ratio”. The madness of this ratio is in overcoming chaos that is impossible for our imagination, and in the violation of the truthfulness of being where the only sun exists. The two suns in Natasha’s work resemble not only a reflection, but also a certain bifurcation of the image of the world or consciousness. In Natasha’s work, the cloud, which is the embodiment of chaos in nature, clearly directs its flow, as if it was constructed by a divine engineer in the form of a soul5678.

Her work Pieta from 19969, published in different versions, dates back to the period when Natasha switched from monochrome small-format graphics to prints on large color sheets. A small image of Michelangelo’s Pieta, engraved in print, printed by chance and at the same time with the rigor of printing on a portrait of a girl, which could be a portrait of a daughter, a self-portrait from a childhood, or both or something else. The rocky landscape, which is the background of the work, existed as a separate artwork. Why does Pieta, an alien element in this painting, also become the title of the work? The gesture is open to interpretation, without any justification. And the girl, is it about the Virgin Mary as a child? Does she not yet know about her future motherhood and future mourning? Or maybe she will be mourned? Will she take Jesus’ place? Will she be crucified and mourned by her mother? However, all this may sound too serious. Maybe the girl is just playing with a figure of Pieta by Michelangelo, as a boy would play with a figure of a warrior, as Natasha played with images from different epochs in her images.

Her strength seemed to arise from a constant struggle with invisible monsters, her work was filled with eerie sadness101112. She seemed to be catching the eerie on her kind of an internal radar. Her meticulous rationale, which balanced or masked the internal storms, was embodied in her approach to the profession. (What did it mean to have the profession of an artist in Ukraine in the mid-1990s?). It manifested itself in the surgically refined control over needles, scalpels, acids, when she prepared her plates and boards – the forms for printing etchings and engravings. She said: “Technology leads me.” She once explained to me that there should be no marks on the back of a printed graphic sheet.

Natasha often placed the images in an oval, it was one of her favorite frames. This formal technique leaves a space around images – perhaps for interpretations? Or for notes? She often used this space for inscriptions in Ukrainian, Russian or English or additional “random” images.

Yet, I think of this oval shape of an egg as a meaningful element. Many of her works resemble prints of the unconscious or prints of dreams. Later, in her gouache series, ovals become heads1314, as if confirming that this form was a container for the unconscious. The gouache series appeared after a break in art practice, which Natasha made after graduating from the institute. Natasha entered into a new stage full of doubts and contradictions.

Here again, it is necessary to address the question of opportunities for the artistic development of female artists at that time in Ukraine. While still a student, she tried hard in her career. She sent her works to international exhibitions and the biennale of graphics, and later received the catalogs from the exhibitions mailed to her where her works were published. After graduating from the art institute, she did not have a permanent studio with the equipment essential for graphic techniques. For some time she kept on going back to the institute to print, and tried to find temporary “shelter” studios.

And out of a sudden, as if she was betraying herself, she switched to gouache – a “primitive” technique wide-spread in children’s art schools. At least this technique could be done at home. Her artworks acquired the features of naive art – decorative, simple, and at the same time somewhat eerie. They seemed to be the next round of her irony over the world and herself15.

The idea of ​​a sudden disappearance, like in Marquez, and the emptiness left behind, worried Natasha and got embodied in some of her landscapes. She once told me that it was interesting to live at least because it would be possible to see yourself “in the age after 40″. When I think of it, the emptiness of her landscapes shines before my eyes. It is not just about her physical absence from our world which she left at the age of 34. After googling her name, I found only one link with information about the artist called Natalia Bazylevych – in three sentences in the Encyclopedia of modern Ukraine16. There are also two reproductions of her artworks. And that is all. The page was last updated in 2003, before her death. The bitterness of the situation is that according to this information, Natasha did not die. She just went somewhere.

Natasha Bazylevych seemed to be able to see not only with two but also with the third eye171819. And this ability is felt in her drawings. A look that shows a terrifying reality, a quiet pain that can be suppressed by making fun of yourself, but which will eventually overwhelm you, overwhelm the world around you. Natasha did not resist it, she stubbornly refused to wear pink glasses, and did not want to adjust to the world. She was not afraid to lose and enter the domain of horror. I would attribute some of her works to this genre, which actually has great critical potential. I have already mentioned oval heads in her gouache works. In her archive, I found drawings on a black background that are not known to me. There, the head lives a separate life, it is placed in a test tube and sprouts in the test tube.

Sometimes, horror images bring about some relief. It is as if the horror really becomes isolated, placed in a test tube, and therefore not so terrifying. The eye, which exudes horror in the outer world or in oneself, conducts an important job that deserves support. I am convinced that Natasha should return to us – into future exhibitions and into publications. Her works are perceived today as a document of a turning point, full of worries and hopes, some of which did not come true.

The text was written in collaboration with the curator Oksana Bryukhovetska (2022).

Thanks to Serhii Savchenko for cooperation.