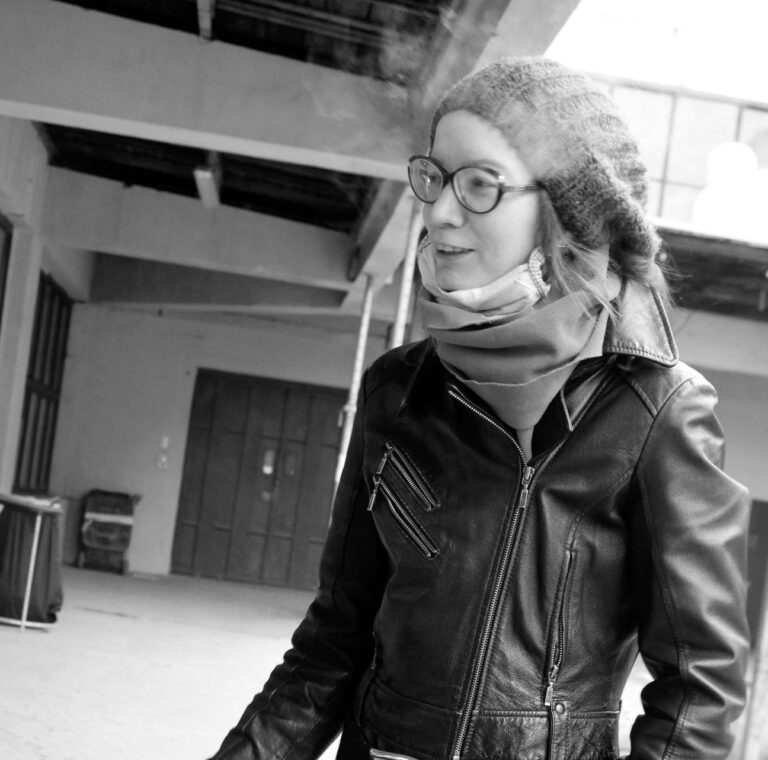 – born 1981 – a painter and a visual artist. In 2014, together with Zuzana Růžičková, she founded the Kolben Open event, which became a platform for the presentation of works by Pragovka residents, which at the time of its founding referred mostly to the generation of emerging visual artists. To this day, she supports the emerging artists as the artistic director of Pragovka Gallery and The White Room. She is a graduate of the Studio of Painting I at the Faculty of Fine Arts at the Brno University of Technology and of the Department of Textile Creation at the University of Hradec Králové. In her art practice, she alternates between both of these disciplines — classical painting and monumental textile installation. She utilises traditional handcraft techniques, which are gradually reduced to a minimalist expression, but at the same time, they are being enriched with the elements associated with painterly principles. Similarly, her paintings are animated with the appearance of movement, which stems from her experience of working with textile. The key series LaTence is also founded on the effort to connect painting and textile technologies. She has been working on it since 2008 and she is using traditional textile craft technologies while modifying the original methods of application into the fundamental principles of new works.

Although I do feel like a painter, like many other artists I went through a very negative experience during my studies, which — fused together with the existential problems I was facing for a couple of years after graduating — caused a relatively long creative break. During this break, I was carefully searching for the roots of my practice, contemplating the necessity of using painting as just this one singular medium. It was only with this creative break that I began experimenting with other materials, mostly those that found their way to me for free. Recently, I have been returning to painting, where I am trying to use the experience of movement, which I gained while working with textile, as a resource.

The ambition of utilising textile in a variety of ways, based on the knowledge of the craft whose essence can be employed creatively, has led me to the series of works presented here, which came to be called LaTence.

Latency is something that is obscured, which in this case also refers to the fundamental nature of the material I used — the threads.

During art work, the meditative character of the production of objects is very important to me. I apply a similar method to the process of devising objects, which necessary has to be rational and mathematical, but at the same time can be very intuitive. Formally, the works might seem to refer to the works of Kazuko Miyamoto or Fred Sandback, but the truth is that in the beginning there was merely a curiosity about the use of the material. For the series of works titled LaTence, the several key moments were: the archetypal aspects of Ikat creative output and their technology, which became a springboard for the first part of the cycle called The Inner Fractal,1 which combines painting and textile. The complex technology of ikat tradition provided me with the space for a kind of “inclusion in the long line of women-weavers, women-shamans”2, where an essential part of their journey as women is the path towards their own authorial conception of textile production. This piece was the first in the LaTence series and establishes a transition from painting to a monumental textile installation. It combines painting and printing on both warp and weft using the effect of free-floating threads as one of the principal of the work. The warp and weft have to be dyed separately, so the deformation and shortening that occurs during weaving must be taken into account in advance. The distortion of the motif thus occurs in three ways: during the creation of the motif, I consciously referred to Flusser’s parallel of the brain as an information processing apparatus, which subsequently underwent the deformation of artistic memory that I deliberately worked with, so they were eventually “blurred” by the haziness of the ikat technology. The series, which took several years to create, consists of four pieces of textile and a number of large-format paintings.

The collaboration and connection of women gained its literal significance in the theatrical project Woman Skin Song Bone (and Enough!).3 It arose from the collaboration and stories of six women and it was presented in Tartu, Estonia and the Acropolis in Prague. In the second of the named locations, the project was met with disapproval on the part of the Acropolis management due to its non-theatrical nature and its conception of the overall dramaturgy that was too subtle. However, at the Salon of Czech Scenography4, it was deemed as a success that not only the participating artists benefited from. It brought forward the discovery of the possibility of founding a theatre performance on a combination of narratives of different women and it made a breakthrough with the material that had virtually not been used as a part of the scenography in the Czech republic before — the thread. This project was absolutely groundbreaking even for my personal artistic practice as the discovery of the potential of this material that I am still working with and continuously developing further. This profound collaboration of a spiritual nature and the path towards our feminine selves, which I undertook together with Kateřina Fojtíková, Susanne Kass, Alma Rajala and Ewa Žurakowska, was a natural extension of my previous individual practices and thus laid the foundations for my future minimalistic approach to large-format textile installations.

However, the transfer of the monumental, scenographic principles, which were natural to my textile installations, into the domain of fine art proved to be quite difficult — one of the subsequent installations, for example, came to be renamed to “The Threaded Intervention in Čestmír Suška’s Deposit”5 due to the problems that arose with the host institution. Thus gradually, I moved from large installations to smaller pieces (Weight,6 using the moment of tension just before bursting), and to the approach that reflects the ongoing events around me (I love my tomatoes7, using the similarities between the material utilised and the pieces of fabric that were cut from my daughter’s discarded onesie, with which home-grown tomatoes were tied to the supporting sticks. The strips of children’s clothing used to tie the tomatoes bore inscriptions such as “I am your sunshine”, “Love me”, and so on). Another reflection occurred spontaneously when one of my works was damaged in Boskovice, and I decided to relativise the very process of creating a work of art through the response to its damage.

The most recent of the monumental installations established along the cooperative and minimalist line of creation was Black Latency (this time in collaboration with technologist Radek Pytelka)89, which was presented as a part of the collective exhibition called We Met Plato, but we did not read his books.

As for the painting aspect of my work, the most recent series that I am still currently working on, is dealing with the theme of movement occurring within textile technologies and the memory events derived from the process of creation.

I must say that I have never considered myself a feminist in the activist sense. However, the pursuit of female power, of one’s own essence, is the basis of my work. I do not consider myself an activist either in the field of curatorial practice, even though I am trying to give space to the generation of emerging artists from different parts of the Czech Republic within our curatorial projects and gallery management. The main reason for these efforts of mine is my personal experience with the difficulties of entering the Prague art scene in the years of 2010-17. I must say that I am essentially uncomfortable with the position of activism, which only draws attention to problems but does not possess the power or an established goal to truly induce change. I prefer the slow labour of gradual change and the grounded inner beliefs. At the moment, a relevant question for me would be whether to consider myself more of a curator or an artist (perhaps neither). When it comes to the contemporary art scene, I tend to stand aside. In my paintings, I am dealing with the topics that currently resonate with me personally (I find the greatest mental support in the work of Ludmila Padrtová) and I am not trying to approach the viewer10. The current conceptualisation of the artistic production that works with textile is not relevant for me personally since I am interested rather in the technological aspect itself — this is the essence of my artistic approach and the topic that I am tackling in both media. Both in painting and when working with textile objects, the concept of time is of high importance — the time for contemplation, the time for finding substance, the time to defend the work in front of oneself. Such self-defence often takes several years before I can actually continue in the creation of a series or an artwork.

Text written by Lucie Nováčková (2021).
Many thanks to Charlotta Kotík for help.