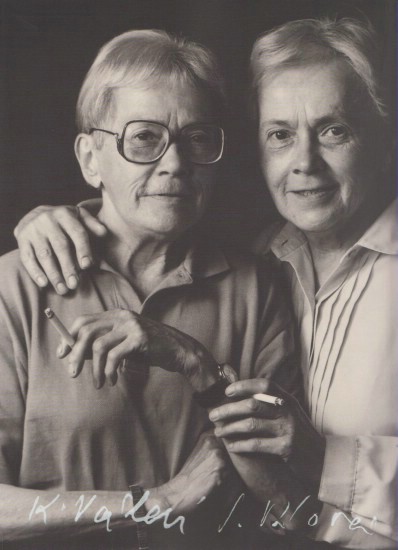 Jitka Válová – born in 1922, died in 2011; and Květa Válová – born in 1922, died in 2011 both studied at the Academy of Arts, Architecture, and Design in Prague right after the end of the Second World War in the studio of Emil Filla. Although they lived very close lives, their work differed starkly. Jitka Válová devoted herself to depictions of fragile figures, into which she incorporated an aura of monumentality. She was interested in the innermost human feelings and emotions. Thus she became one of the most prominent painters of the so-called New Figuration in the Czech painting tradition (alongside painters such as Adriena Šimotová or Věra Janoušková). On the other hand, the figures of Květa Válová were colossal and heavy, reminiscent of boulders or the formation of rocks. Květa Válová conducted research on the connection between man and nature. In 1954, both artists became members of the Trasa collective, but their art practices remained in the seclusion of their studio in the city of Kladno until the 1990s.

And what should I say about myself? I don’t think that I am any different from the others. I am a painter, and that is what I wanted to be from an early age. We have been painting ever since we could hold a pencil in our hands. I am so used to Květa — we may be two bodies but we are of one soul. When I talk about Květa, I talk about myself. Our souls had already been fused together and when she took a half, she took the merged one. I lost a half and even though there is a little bit of Květa left, it is not enough. When we were still together, we had this enormous soul. Both of us actually lived two lives. Each our own and our sister’s. If we wanted something, we both wanted the same. We had the same opinion regarding everything. I miss Květa so much — when she died, I was just useless. Květa and I promised each other that when we die, we won’t haunt each other. And now I’m quite sorry because I would be happy to be haunted by her. But she is already entirely somewhere else. Květa died a beautiful death. We were having chicken for dinner. After the last bite, she leaned back and closed her eyes1.

When we were young girls, there were many boys around us but they were only our friends. As they say, many things get ignited during puberty but when it came to us they did not. I liked boys but only as one would like a pretty flower or a tree. When I was older, I would fall in love but fortunately, it was always platonic. When Květa and I were 17 or 18, we said to ourselves that we would never get married because we didn’t really care about having a family. A man would bother us and we would have to be separated, and that we wouldn’t want at any cost. And we kept this promise. We were lucky — nobody wanted us anyway.

While we were studying at the Academy of Arts, Architecture, and Design in Prague, it was good. But when we graduated, our mother provided for us even though she had CZK 450 a month. We started selling in 1980 when we were already 60. What we did was not very profitable. Our father died when we were four and our dear mother was an angel. Květa and I were twins but we had two more sisters. Our mother always let us do whatever we wanted. She would have taken up painting when she got old but we never allowed it. And for that, I am very sorry. A young person can be so insensitive. She had an extraordinary sensitivity and she could always tell whether a painting was good. Her eyesight had gotten worse, especially her nearsightedness. When we hung a painting on the wall, she certainly couldn’t see what was in it but she had this strange intuition that allowed her to feel the painting. It was infallible2.

My sister and I studied in the Studio of Monumental Painting of Emil Filla at the Academy of Arts, Architecture, and Design in Prague. Filla was an excellent pedagogue. He was a cultured and a noble man and he treated us accordingly — he never tore anyone down, although there were also professors who would. During the war, Květa and I were deployed in the metalworking plant Poldi in the city of Kladno. We liked this environment, so we would go there to draw. There we came to realise what we would like to do — I liked the metal rollers and Květa would go to the forge to observe the machines. We would even go to the mines. Čestmír Kafka used to say that we were a lost generation. We couldn’t go anywhere, no one knew us and our work had no response. That depressed us. Nobody knew anything about us. The only exhibition we had was at the Václav Špála Gallery in 1966. At that time, everyone was making abstract art but Květa and I painted figuratively. So all the attention somehow passed us by. Then we had a large exhibition in Cheb and Ostrov nad Ohří. However, we did not relate much to what we made for these. We produced mountains of sketches. I still thought that I still couldn’t do anything and that once I made something proper, I would keep it. Everything has to come from within. It cannot be superficial for it would is visible. One must be truthful and one must be true to oneself3.

Painting has a personal meaning for me. I gave up many things but I gave up what I did not really care about, which is not much of a sacrifice. So I had more time to paint. Freedom and rules that demand a certain discipline. Without rules, one cannot do anything but neither can they without freedom — plus and minus, the contrasts. I believe that the whole universe is founded on this principle, and so are we. As they say, without evil, we would never know good. Květa and I had exactly the same approach to life, nature, the universe — we tended to personify everything. Květa created the series called The Elements — wind, stones, and especially fire. While creating the fire, she felt like fire. While creating the wind, she felt like the wind. Květa was so close to nature that she was an element herself. Man was enough for me, so what Květa saw in the stones I bestowed upon the figures. I wanted them to contain the fire, to be as solid as a rock. I enjoyed movement, the clash of energies — and that could be expressed through a figure very well. What I am interested in is the inner life of a person. I have the ability to transport myself into another person’s situation and experiencing them. Thus I can pass on an experience that I myself have never had. When I envision these figures, I try to imagine what drives them and how they bear the burden of some situation. I perceive nature as a living whole so my figures also resemble plant stalks. I have always been interested in this clash of energies. So I devised wrestlers, wrestling man-to-man — which came to be this inner struggle that one has with oneself. Essentially I do not work with what I can see but with what I feel. I cannot fully articulate this through words but a painting does not have just one meaning. It is living its life independently of me4.

Květa and I did not receive much praise during our lifetime, only now towards old age. This annoys me because the recognition that we have received has referred to what used to be. I do not think that I deserve it so it hasn’t brought me much joy. I find it ridiculous when someone says that they paint for humanity as a whole. I don’t paint for other people. I paint for myself. When I paint, I suffer because I am trying to do something that is beyond my capabilities. But I do like to suffer since it provides a purpose. I enjoy the silence, but when I am working, inside I am far from silent. I don’t know what it is, probably my soul — she would like to sing, but I cannot. I sing by painting56.