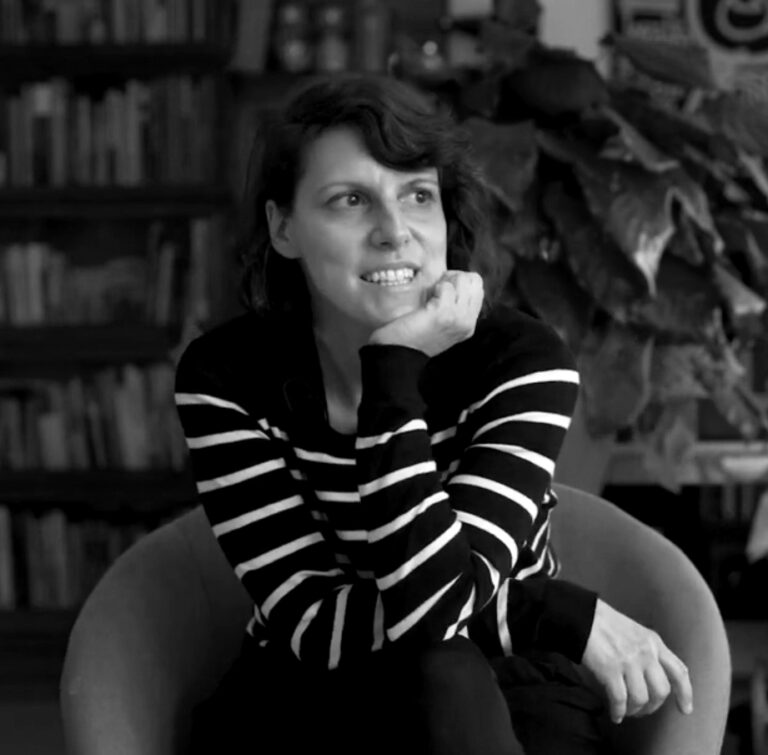 – b. 1979, based in Budapest. She took up painting at the Hungarian University of Fine Arts where she graduated in 2006. She completed her postgraduate studies at Le Fresnoy École Internationale des Arts Contemporains in 2016.
Her works are drawings, paintings and short, non-narrative, conceptual video loops, complemented with her recent interest in video installations and video sculptures. The videos are elaborated versions of her paintings, animated in 2D or in 3D or often with mixed techniques. She creates portraits of fictional but very familiar characters that she observes and ’collects’ in public spaces. When looking at people, instead of perceiving the extraordinary, her focus is directed on the ordinary, exposing otherwise unnoticed details and revealing invisible elements. Her protagonists are mostly Eastern European or Central European women, characterised by vulnerability, combatting aging, emotions and anger, fatigue of their everyday existence and many times, motherhood. Thus, these figures are a product of their geographical, political, historical and social context but the grotesque characters also possess a certain kind of humour that the artist depicts with a large amount of empathy and compassion.
Eszter Szabó showed her work at numerous solo shows and took part in various group exhibitions in Hungary, Paris, New York, Brussels among others. In 2021 she was the winner of the prestigious Leopold Bloom Art Award.

My work revolves around everyday people. I am observing people wearing T-shirts with hearts and glittering kissing mouths printed on them, those with frilly blouses and grown out hair, whose mouth is turning down and have make up over their puffy, tired eyes. I am interested in the floral patterns inconveniently warping and disappearing in and out of body folds. I am also inspired by the inert or irritated postures I can relate with.

My watercolor and oil paintings are made quickly on thin material, and are slightly translucent. My animations deal with details that happen in seconds. In my animations, I am dealing with the seconds, the small details. All my works are a combination of both generalization and non-judgmental observation as well as mixing blurred half-truths with razor-sharp details.

I created a certain perceptual practice in which, instead of perceiving the extraordinary I direct my focus on the ordinary. By recognizing notions of familiarity, some invisible perspectives are getting revealed. I am interested in social mechanisms and the boundaries between the personal and the political. I am intrigued by the desire for beauty and harmony, and by the expectations towards women. Recently I started inventing female characters that are inspired by everyday women I observe on the streets or in the corridors of the kindergarten. I try to formulate these portraits in such a way that they are free of ideas deeply attached to the notion of “femininity”. I am interested in whether it is possible to push the boundaries of imagination in the portrayal of women.

Animation plays a significant role in my works. The idea of creating an animation came to me while playing with a piece of wax in my old studio at the University. My first video titled Shapes1 was about the desire for assimilation and perfection and about the distortions during the attempt at getting into the right shape. Instead of creating a narrated story, I became interested in showing content through movement, while I am building a non-traditional narrative. I consider my videos as extended versions of my paintings and I install them accordingly. I usually display them on screens installed on the wall or in the space, or as projection. Importantly, the viewer can start and stop watching the video loops at any time.

Selected works  In my earlier works, I created a series of watercolors and short animations about people wandering around in everyday life (C’est combien le kilo?)2. I continued this series with speculations about the future (in 2053)3.  My video work Maria4 is dealing with the relationship between the image and moving image, and between the artist, the image and the viewer. It is an attempt to create a detailed portrait of a fictional, but average woman. The final work turned out to be much more grotesque than planned, so the character begins to “talk back”, criticizing the artwork, complaining to the creator and the viewer.

I created The Reconquest of Paradise5 in 2011, the year when the political situation that defines our life until this day started to escalate in Hungary. The work is an ironic formulation of an idyllic state, a draft of an “ideal” future. The video was inspired by the final scene of the 1986 Hungarian animated film, Cat City (director: Béla Ternovszky), in which the method of defeating the enemy is to make them dumb, to tame them. The three minutes long video includes a number of nationalist symbols, such as the happy, folk dancing couple leaving the local supermarket, the fountain shaped like the Holy Crown of Hungary or the traditional greeting, in which men kiss women’s hands.

The “Sublime beauty” embodied in decoration was in my focus while creating my series of paintings and videos entitled Dispenser of Delights6. I painted the imaginary tenants on photos of downloaded real estate advertisements from the Internet. I reimagined the spaces in 3D and animated the ritual activities of the presumed residents using mixed media.

Abandoning the Testicals7 deals with the political questions of gender in a more direct form, and addresses the burdens and anger of women.

Homo Domesticus8 seeks the aforementioned forms of representing women and methods of domestication. As part of this project, I started to use reproductions of 15th-16th century paintings: I transformed the details of facial expressions from these old images into my present work.

My video Princess Beauty9, produced between 2020 and 2022, and the video installation that evolved from it, were inspired by a sulking female character in a Lucas Cranach portrait. I transposed Anna Cuspinian’s bored, defiant gaze into a contemporary medium. I painted a modern-day character wearing a ponytail, make-up and a top with a glittery mouth printed on it (A.C.). I used this painting as the texture for the 3D animation based on a tale entitled Beautiful Princess by Aliz Mosonyi. In the tale, a girl is bored by the overwhelming discipline of two tulips. In the video, the power of the invisible tulips is shown in the form of physical simulations generated by the software. The animation of the protagonist’s own movements and the machine-calculated simulations got tangled up in the process, creating random glitches around the character. I created the final video using these fragments. The latest presentation of this work is a walk-around video installation, a sculpture-like pile of screens.

In my most recent works that are still in progress, I am experimenting with simulations as motifs of burdens, expectations and situations generated by life. While exploring different layers of reality, I also started working with augmented reality applications.

I do not use the phrase “women’s art”. I find it confusing, because it reinforces the very phenomenon that everything has a default male perspective, which defines and distinguishes “women’s art” from art itself. It is also unclear whether we are talking about art that deals with the situation of women, or art produced by women, or about the intersection of these two.

I am interested in women’s self-image. I started to deal with this topic at the University of Fine Arts. I tried to convince the secretarial staff to let me paint a portrait of them, as these two women were very important characters in the university’s everyday life. At first they didn’t like the idea at all, suggesting that I should find a ‘nicer’ theme and fearing that they would be the subject of some kind of mockery. These concerns do not qualify them. According to the generally established social norms, Mrs Pongó and Mrs Ollós are clearly not meant to be portrayed by an artist.

From the current circumstances of women, I am interested in the state of fatigue and exhaustion, the struggle between impossible and conflicting expectations.

The statement was written in collaboration with arts historian Kata Balázs (2022).