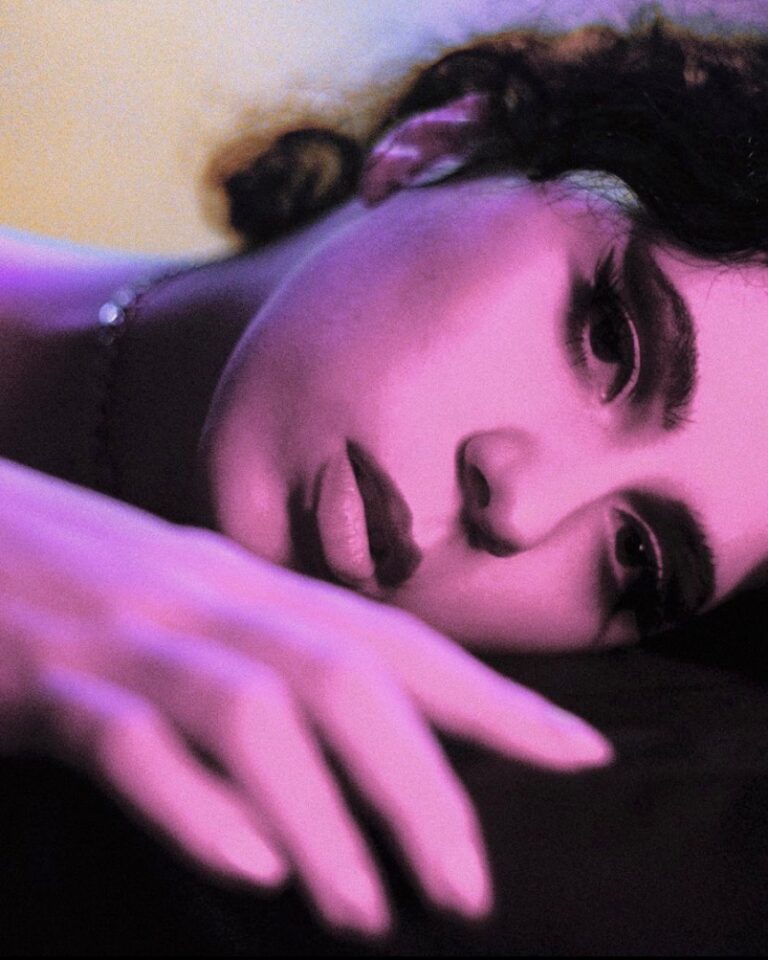 – (1998) is a multimedia artist, living and creating in Belgrade while studying New Media at the University of Fine Arts, currently in her final year of obtaining a bachelor’s degree. In her artistic practice, Pavić tackles the complex contemporary issues, such as post-cyber feminism, consumerism, interpersonal relations and the impact of the evolution of technology on the comprehension of oneself and the mental health. She participated in numerous exhibitions in Serbia and abroad, including three solo exhibitions. She expresses herself through performance, video, photography, writing and art direction.

The importance of art is reflected in the personal, but also in the collective experience. Actually, I think the two are intertwined. At the age of ten, I had the privilege to visit the Centre Pompidou in Paris. It was the first time I attended a contemporary art exhibition and after I left the museum, I burst into tears. When I was asked why I was crying, I said that I dreamed about the sounds that were a part of one of the exhibited installations. I was very upset, primarily because I was confused as to how it was possible for the author of that work and me to have something in common, which is at the same time so intimate and so abstract?

Over the years, I realised how interested I am in visual culture. What fascinated me the most was the power of symbols in the context of conveying a message. It’s almost magical how much you can say without having to say anything. I’m very inspired by pop culture, trends and clichés. The video performance “I CAN MOVE MOUNTAINS”1 is an ode to the well-known expression “I would move mountains for you”, one we have heard countless times in movies, series and songs. According to art historian Maja Petrović, the work speaks of the absurdity of ambitions and feats, whose expressions – unfounded in reality, become empty phrases and performative actions that expose their banality.

Unfortunately, the situation is such that only a few can make a living from their art. That’s why I believe that anyone who is honest with themselves and in their work, makes art because they feel like they have to. I make art because I feel responsible. Even if it’s purely aesthetic, doing art in this region, while capitalism is in full swing is a statement in itself. During the process of creating the work “Onlyfans” in 2020, I realised that a correlation can be made between the increased number of content consumers due to the pandemic and the increasing number of authors of that content generated by the economic crisis. OnlyFans and similar platforms are a reflection of an endless cycle in which an individual surrenders to a system that is dysfunctional in order to survive within it. The problem is not the individual themself, forced to choose whether to exploit their body in “this” or “that” way, because they will surely use it for profit, even if they do not take off a single piece of their clothing. The problem lies in the social glorification of that action, because the monetary gain from errors in the system creates the illusion of power, while it is actually a licence to feed off of the system’s participants.

I have always attached great importance to education and respected institutions, so I took my academic achievement at the Faculty of Fine Arts in Belgrade seriously. To my great disappointment, I ended up in an institution that is not only conservative, but full of sexual predators and people prone to verbal violence. Many times, I was put in situations by different individuals where I felt helpless and even blackmailed. It is sad that I am not the only one with this kind of experience and that this behaviour is not sanctioned, because reports are directed through the “my word against his” filter, and we all know that institutions show more understanding for the middle-aged men, who are respected in their profession, than 18 year old girls. Even sadder is that these things are common knowledge, but people consciously choose to turn their heads the other way.

I think it would be better for me not to view my profession as a part of my identity, but it’s very difficult to do so when inspiration comes from trauma. In my case, the side effect of creation is also a kind of therapy. In my work, I reflect on the position of a woman in modern society and the construct of partnership relations. Artwork ideas come to me from the constant questioning of myself, my performativity and complexes. I am inspired by everyday life and its injustices, especially from the perspective of women and LGBTQ members in the Balkans, but also on a global level. Globalisation is essential as far as my generation is concerned. We grew up on social media and it has shaped our perception a lot. That is one of the reasons why it would be difficult for me to declare myself as an artist with an exclusively Serbian national identity.

In the work “Babygirl”,2 I dealt with power relations using fictitious figures of a dominant and an inferior persons. The characteristics of the inferior person, i.e. Babygirl, are ideal female traits that are imposed by society and imply passivity. These are clichés, which should be avoided, but at the same time, they are the biggest comfort zone. Such a state implies another person who is active in this case and who provides the inferior one with everything she needs to function in general. This means that the dominant person is in control, but also bears responsibility. I saw that pattern as a kind of human need to play a certain role, which determines the dynamics of the relationship from the beginning. I had a lot of fun translating that into photos – with the help of Goran Popovski – which present me in a manner between fantasy and parody, in a carrier (which is a hybrid design of a carrier for children and a sex swing), sexualized and infantile at the same time.

I am very interested in body modifications that occur due to social pressure and propaganda, because feminism is an important part of my practice. I am intrigued by how aesthetic alterations are connected with our psyche and emotions. I addressed this in the work New Body. In the last few years, there has been an expansion in availability and demand in this field, among other reasons, because the icon of our time – Kim Kardashian, over time and under the watchful eye of the public, “made” herself into an ideal. During the performance “Can I Rest in Peace?”3 I wore a copy of the Marilyn Monroe dress that Kim wore to the Met Gala 2022, except that it was made of biodegradable material. The aim is to confront that daily marketed perfection with the inevitable mortality and disintegration. I try not to judge in my works, but as my dear colleague, curator Ana Simona Zelenović says, there is a simultaneous critical and affirmative approach.

The text was written in collaboration with Mirjana Dragosavljević (2022).